Fanisi, a US$50 million early-stage and growth capital fund, was launched in April 2010 to invest in diverse sectors in Kenya, Uganda, Tanzania and Rwanda. It targets to invest in high-growth, mid-tier businesses with a history of profitability. It has since then made various investments in the ICT and education sectors.

In November 2010, it invested in Paystream Limited, a firm providing an IT platform for processing cash and card transactions. The same month, it invested in Elris Communication Services Limited, a company specializing in providing network implementation and management services to the telecommunications and broadcasting sectors.

In 2011, Fanisi made an entry into the education sector, by investing in Hillcrest International Schools, where it acquired a majority shareholding.

Private Equity firm Fanisi Capital will pump Sh400 million in Kitengela International School. The investment will see the school triple student population to over 3,000 and open up two more institutions in the next three to five years.

Eight local pension schemes are among investors who have committed Sh3 billion to a new fund operated by Fanisi Capital.

This is a 10-year fund that aims to raise between Sh7.5 billion and Sh10 billion in the next one year. 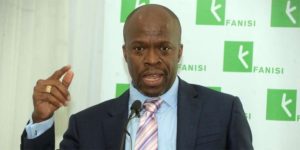 With a flashy profile, there seems to be rather a darkly side, according to allegations doing rounds.

In 2015, Fanisi Capital announced it had invested $2.1 million in a mid-sized local food distribution and processing firm that sells pizzas, berries and fresh juice.

Fanisi said in a statement it had invested the cash in European Foods Africa Limited (EFAL) through debt and equity.

However, this would remain just that; announcement. According to protest placard doing rounds on social media supposedly from Stefan Bletzer, the founder of EFAL, the $2.1M investment seem to have been a major bluff.

In a statement written on the giant board mounted on a van and moving around the capital, Bletzer seeks to expose an underlying scandal in the investments firm.

”INVESTORS BEWARE!” It opens, “this is to inform the public that Fanisi Capital never invested 2.1M Dollars in EFAL as Fanisi via Tony Wainaina as announced in various newspapers in 2015.” It reads. Tony Wainaina, the Fund’s managing partner, previously served as the chief executive of Centum Investment Company Ltd (then known as ICDC Investment) and Trans-Century Limited.

He goes to give an affirmation, “I Stephan Belzer, founder hereby confirm investment failure of Fanisi Capital led to massive distress with EFAL and huge staff layoff. As a foreign investor, I was misled and taken advantage of with promises not fulfilled.” 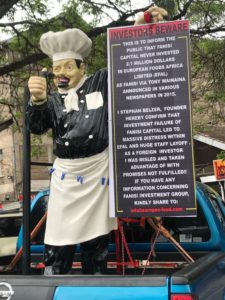 If the accusations are anything to go by then it can only be speculated that Fanisi either made the headlines to boost their portfolio or perhaps according to Belzer, it would be a scam.

Kenya Insights is interested in investigating and taking up this matter. Anyone with information on Fanisi Capital Group can reach out to the editor of this site on ([email protected])