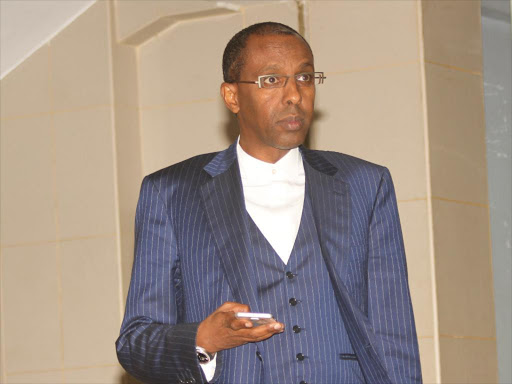 The stage is set for what could be a grand legal battle as former Chief Justice David Maraga sues Lawyer Ahmednasir Abdulahi over a defamatory tweet. In what has been simmering for a longtime now, Grand Mullah(GM) consistently mentioned Maraga in an alleged bribery scandal involving unnamed Senior Supreme Court judge.

According to the Civil Case No E047 of 2021 filed by Maraga’s lawyers TripleOK Law LLP Advocates, it was the tweet made by GM on 12th January 2021 that broke the camel’s back. “If CJ Maraga is a decent and honest Kenyan, he should come clean on the issue of the SENIOR judge of the SUPREME COURT who took Kshs 220 million BRIBE. Me and CJ Maraga know the judge…intelligent Kenyans must read A LOT on Maraga’s astute silence on this matter!” The offensive tweet read.

Maraga says GM’s words well calculated, intended, contrived and well designed to pain him as an indecent, dishonest Kenyan and that he was aware of the unnamed judge being offered Sh220M bribe and that Maraga was party to the arrangement and didn’t conceal the identity of the judge.

If CJ Maraga is a decent and honest Kenyan, he should come clean on the issue of the SENIOR judge of the SUPREME COURT who took Kshs 220 million BRIBE. Me and CJ Maraga know the judge…intelligent Kenyans must read A LOT on Maraga's astute silence on this matter!

Maraga also sued GM over defamatory claims that appeared on other media outlets including Standard and Tuko which he compiled as evidence in the suit. GM had said on KTN that Maraga presided over the most corrupt judiciary in Kenyan history and that the CJ protected the corrupt judges.

The Sh220M deal has featured prominently on GM’s Twitter going to hint at how much he knows about the secretive deal.

On that matter of Kshs 220 Million BRIBE and the SENIOR judge of the Supreme Court who alleged that he DIDN'T EAT ALONE but shared with TWO OTHER JUSTICES of the Court…who brokered this DEAL? WATCH this space…@dkmaraga @Kenyajudiciary @StateHouseKenya

In a rebuttal to the suit, Ahmednasir who had earlier dismissed the Maraga’s lawyers demand for a pull down and apologize over the tweet, had now threatened to open the lid on the alleged grand corruption in the judiciary. The lawyer said he’s going to unmask what he terms as ‘biggest bribe in Supreme Court.’

In a scathing attack tweet, GM claims that the judge in question fraudulently acquired huge compensation from SGR after falsifying land evaluation report on a land that was registered to his daughter.

That SENIOR JUDGE of the SUPREME COURT falsified evaluation report for some land which he registered in his DAUGHTER'S name and got HUGE FRAUDULENT COMPENSATION from SGR. The police investigated the matter and recommended prosecution….but…but…but..@dkmaraga

Maraga’s suit coincidentally relies on Ahmednasir defamation suit against Njeri Thorne. The lawyer had sued the alleged NIS operative after she claimed he was engaged in money laundering and handling proceeds from the Somalia pirates.

Folk like @ahmednasirlaw should not be commenting on matters KE. He is responsible for laundering pirate money bringing it in and distorting our economy. He also big caliphate dute and has worked against KE with terrorists.

The case is still active, while backing her claims, Njeri said that it was LSK’s President Havi who leaked to her the dirty secrets of Ahmednasir.

Kwanza, it was @NelsonHavi who told me all about @ahmednasirlaw. Of course I did my research later to confirm.

Njeri who’s been subliminally attacking the SC on her Twitter page as a smart strategy to cushion her from further law suits, has been throwing more hints on the case that has been clouded with a lot of secrecy.

The judge that Naniyo has been threatening is Maraga.

You can read through the suit below


Maraga demands that Ahmednasir pulls down the defamatory tweets and apologize publicly on his Twitter page, daily Nation and standard newspapers. While reading malice, Maraga questions why Ahmednasir did not seek the correct legal route by reporting the bribery to JSC, DCI, EACC as he should’ve.

And even before the ball drops, GM has slammed the CJ with yet another article on Daily Nation and Standard criticizing his legacy as the CJ.

Article appeared on Standard’s publication of 24th February two days after the filing of the suit.

A similar rebuttal appeared on the Nation of 24th February.

It is not the first time Ahmednasir is attacking the Supreme Court and accusing the courts of corruption.

In the Sh200M bribery scandal that implicated Judge Philip Tunoi in the election petition against Evans Kidero, Ahmednasir claimed that other Supreme Court judges were bribedbribed as well to the tune of Sh300M.

Shortly after the Supreme Court upheld their decision overturning the decisions of the High Court and the Court of Appeal nullifying the election of Wajir Governor Mohammed Abdi Mohamud on February 15 2019, Ahmednasir took a swipe at the six judges claiming corruption was rife ahead of the ruling.

“Many Kenyans know that they are judges of the SUPREME COURT OF KENYA who take bribe in every case that comes before the COURT.These judges have made a killing in petition cases…yet the CJ and JSC do nothing about them…when will these notorious judges be removed.” Ahmednasir tweeted on February 19th, 2019.

As soon as the murmurs about the alleged misconduct by Supreme Court judges began to swirl, Chief Justice Maraga, while presiding over the launch of the State of the Judiciary report, called on Mr Abdullahi to immediately file the petition containing his allegations against the judges.

“In the last few weeks, senior counsel Ahmednasir Abdullahi publicly claimed that some judges of the Supreme Court were bribed to decide the Wajir gubernatorial petition in the way that they did. I challenge him to file a petition and assure him that the Judicial Service Commission will take stern and appropriate action against those judges if given the evidence of alleged corruption,” the Chief Justice said.

Lawyers for governor Abdi have since the day the judgment was delivered on February 15 maintained that there was no bribery and the allegations by the governor’s rivals were a case of sour grapes.

“Mr Abdullahi has formed a habit of complaining every time a matter does not go his way. The allegations on bribery have no foundation. If there was bribery he should have petitioned the JSC earlier before the judgment was delivered. But he is complaining because he lost fair and square,” lawyer Nelson Havi who was in Governor Abdi’s legal team said.

The battle in the Supreme Court over Wajir Gubernatorial election is exposing one self styled Senior Counsel as a distinguished fraud-star. Problem is that the Advocate is so brazen that he always goes to press with the created evidence. #SiHiyoNiKiriminoo?

Ahmednasir filed a petition with Judicial Service Commission (JSC) for the removal of Mohamed K. Ibrahim, Jackton B. Ojwang, Smokin C. Wanjala, and Njoki S. Ndung’u whom he had linked to the bribery scandal.

While Ahmednasir has been on the frontline demanding for accountability and competent judiciary putting up a spirited fight against Supreme Court, himself has also been accused of briberyaccused of bribery.

Businesswoman Rose Mbithe had claimed before a tribunal in 2016 that Ahmednasir asked for a bribe to help her in a property suit.

Ms Mbithe, who is a Sehit Investments director, said Abdullahi had first asked for Sh4 million through one Rashid Hussein, who is her family friend. The lawyer, she said, later asked for Sh20-30million to help her sort out the case.

Mbithe further told the tribunal that after the suit house in Karen, Nairobi was valued at Sh220 million, the lawyer asked for half the value of the property (Sh110million).

Ahmednasir denied the claims of bribery.

In his latest battle with Maraga, many will be waiting to see how far it goes and the juicy details that the lawyer has promised to splash in his defense.

How A Report On Gambling In Kenya Was Censored