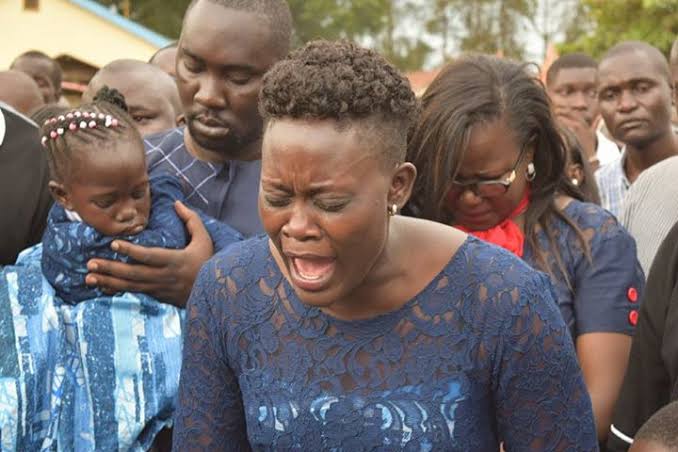 Death Of Chris Msando, the IEBC’s tech guru who was brutally murdered in unclear circumstances continues to linger on many Kenyans minds an year later. One of the most outstanding memories is his wife’s testimony and strength shown during those trying moments.

A widow left with orphans and without a job since the IT guru was the family’s breadwinner, there was immediate need for her to find a job or s business to sustain her young family.

Struggling with life, Eva at one point had reached out to the public for any job opportunity. Her prayers seemingly, have been heard, in a gazette notice Peter Munya the CS Industry, Trade and Cooperatives, Eva Buyu Msando has been appointed to be member of the Export Processing Zones Authority for three years effective 20th September 2018.

The good news could be attributed to the handshake between President Uhuru and PM Raila Odinga. Msando who ails from Odinga’s community was suspected to have been assassinated by hit Squad allied to the state owing to his stiff grounds that would’ve limited rigging of the elections. The late Msando is on record saying to have developed a hack free electoral system. His death was widely read as a sabotage to the electoral system.

Many questions on the murder of Chris remains unresolved with the state reluctant to follow the trail.

Kenya Insights allows guest blogging, if you want to be published on Kenya’s most authoritative and accurate blog, have an expose, news TIPS, story angles, human interest stories, drop us an email on [email protected] or via Telegram
Related Content:  DCI Nabs Two Mombasa-Based Cops Looting From A Stalled Cargo Truck
Related Topics:
Up Next

The Painful Death Of Monica Kimani, They Tied Her Hands, Slit Her Throat And Dumped Her Body In The Bathtub