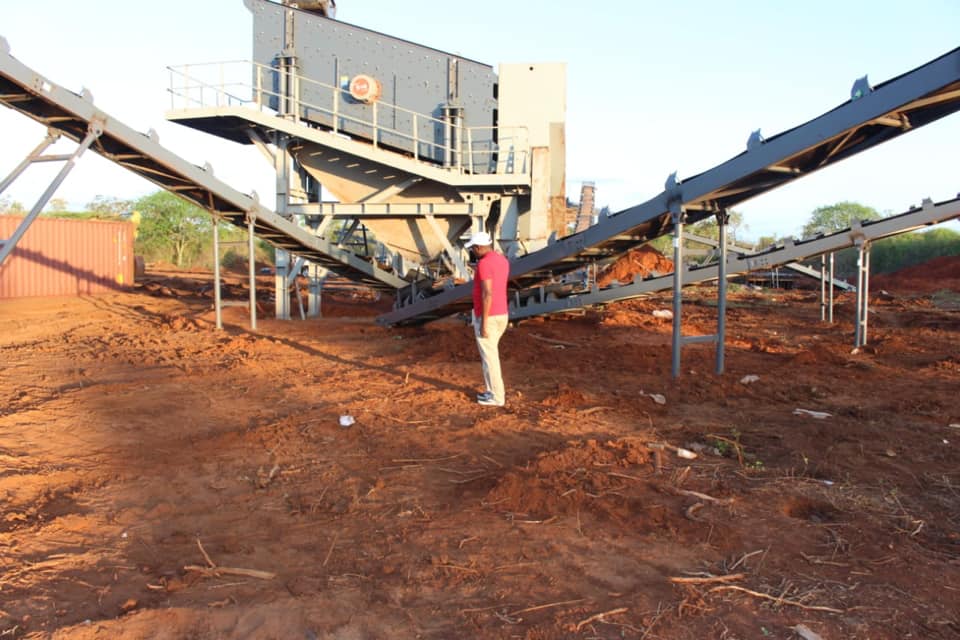 MCA John Mbaki Kisangau at the construction of the ballast crusher

Charity Ngilu, the governor of Kitui County is on the spot after she was involved in a Ksh85 million fraudulent Ballast Crusher scheme. In social media statements one Mbaki Mbaki, Yatta Kwa vonza ward MCA faulted the contract for supply , delivery , installation and commissioning of a stationary stone crusher plant, 100-120 Tons /hr capacity signed between the county government of kitui and EDN George Diesel Ltd.

EDN George Diesel Ltd which is registered under two Directors ( Geroge Mungai & Nancy Wachira) who also happen to be a couple, was awarded a tender worth Ksh 85,305,490.09 by the county government of Kitui. The contract, however, was on condition that EDN agree to open a new bank account with SIDIAN BANK and accommodate a relative to the county CEO’s son in-laws (JOHN ODUOR) as a mandatory Signatory to the account.

EDN would then comply and open an account on 23/05/18 with sidian bank AC # 01036020003040 with  John Oduor as a signatory. In the next two days the county government through the ministry of trade immediately signed the contract.

Before the hurried approval of this contract the CECM Trade had a quotation from one of the leading crusher plants manufacturers in China Ref. No.: SS201801190422A dated 19-01-2018 with total final price cost insurance & freight up to Mombasa (CIF) of the plant at US$ 212,433 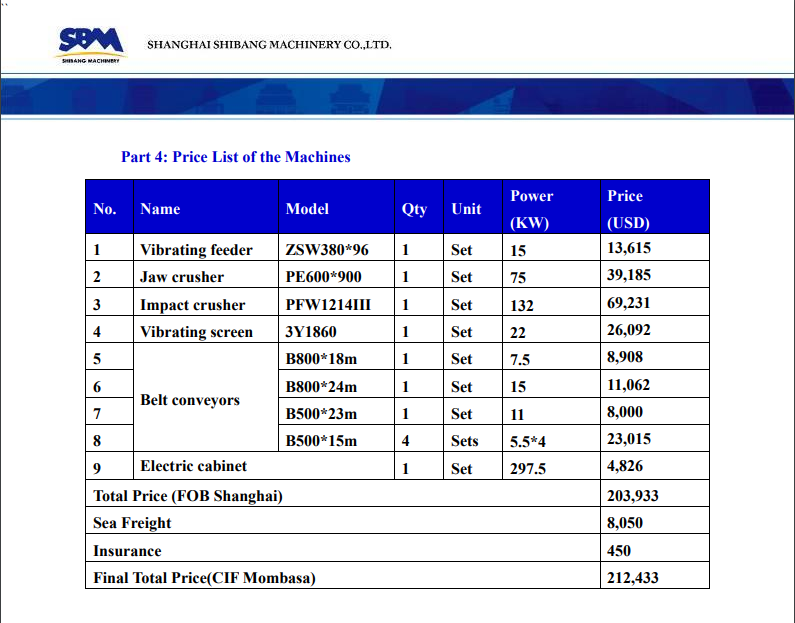 EDN went ahead to source for the ballast crusher from Shanghai Zenith minerals sales CO, ltd and a proforma invoice was forwarded to him via email at Us$ 379,532 CIF Mombasa. They prepared an import declaration form # E1807897755 and the same was approved by Kenya Revenue Authority customs department on 06/07/2018. At this stage Ksh 17,061,098 was paid by the county government to EDN through their new account with Sidian bank. 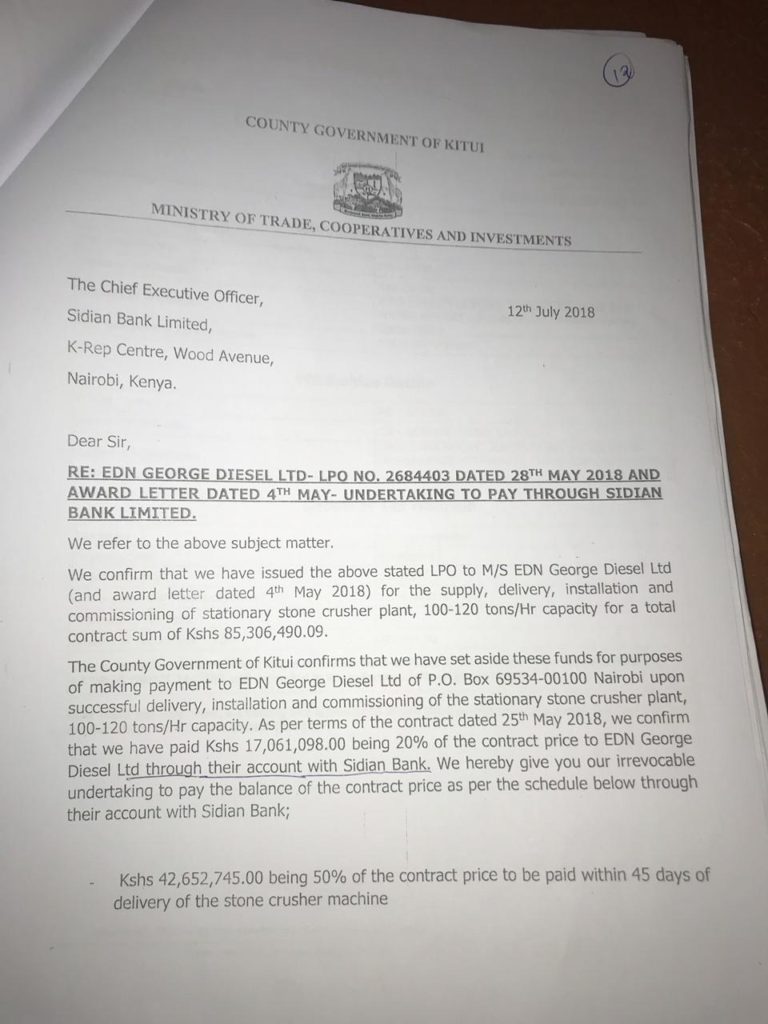 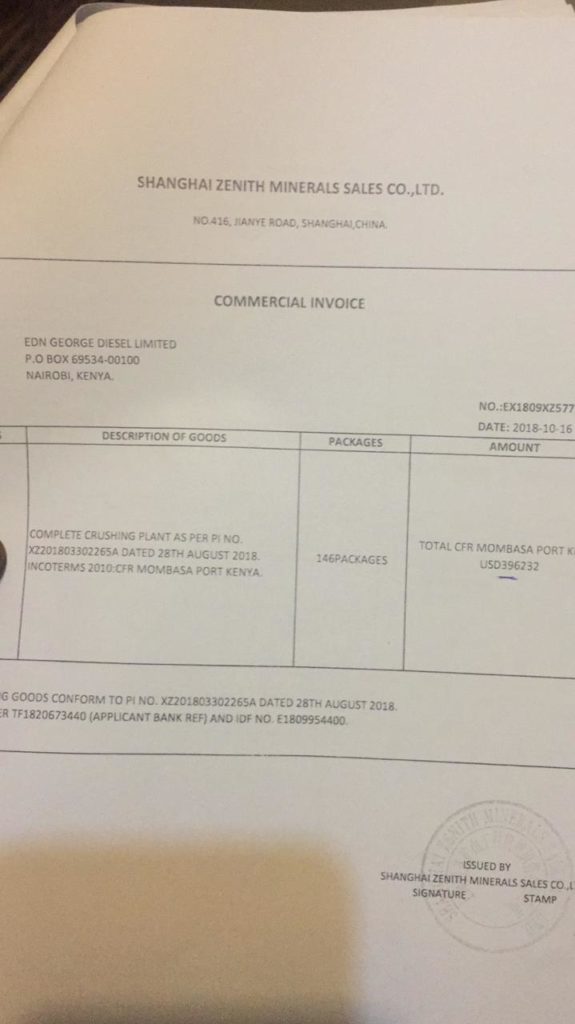 Suspecting fraudulence, Mbaki went ahead and sought a quotation for the equivalent Stationary stone crusher plant with 100-120 tons/hr capacity from Shanghai Zenith minerals sales CO, ltd on August 14th 2019 and the same sales manager who sold the county crusher responded with a quotation amounting to only US$ $208,499 compared to the county governments Us$ 396,232. 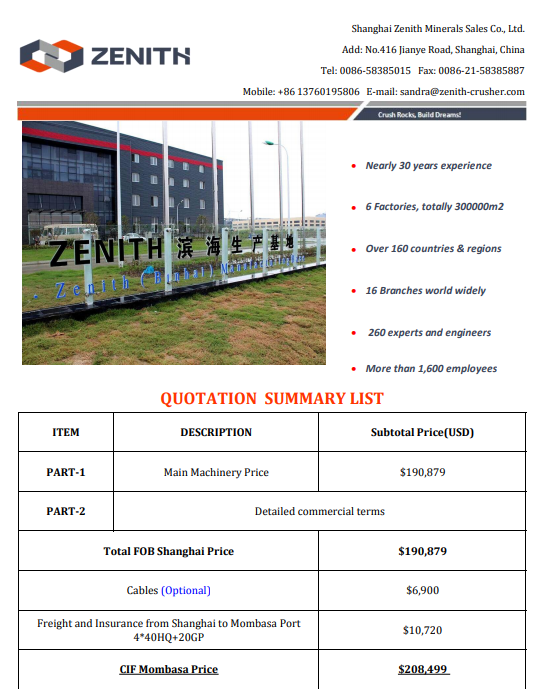 To figure out how the scheme was orchestrated, the MCA sought to confirm if the sales manager Shanghai Zenith minerals sales CO, ltd would factor in his margins on their cost and pay US$ 300,150 for the plant and then they would refund the difference of US$ 91,651 to his account based on their formal quotation.

Genuine quotations from SBM and Zenith confirm that this plant would cost between Us$ 200,000- Us$ 215,000 meaning kitui county lost approximately Ksh 19,000,000 on the cost, insurance & freight up to Mombasa via the well orchestrated fraud.

This proves the Executive was in breach of the law and there was no certainty that the County residents would get value for money for the first payment of Ksh 17,061,098 as at 30th June 2018.

The project was expected to provide 23 million tonnes of ballast required for the construction of Thwake Dam. The ward representative says the initial machinery was not transparently procured and the crusher ownership remains unclear, with the MCA promising to release more evidence.