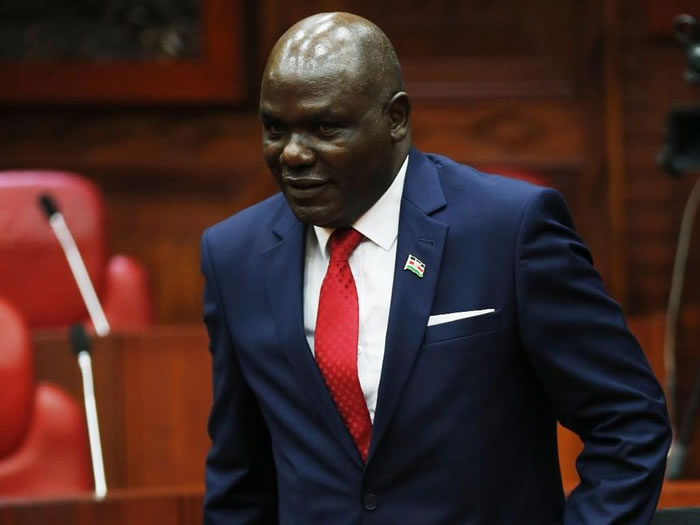 IEBC Chair Wafula Chebukati and mother-in-law the nonagenarian Rose Otolo, have been embroiled in a lawsuit over the administration of the properties that the former Nairobi city veteran politician-cum- businessman Weston Otolo left.

Hellen Otolo told Citizen Weekly that overgrown bluegum trees were interfering with the power line within the homestead. They were sold at a cost of Sh32,000 to local loggers. But to her surprise, she got information from the ground that police officers raided the home to stop the exercise before arresting the loggers.

Hellen has cussed Chebukati for dangling in matters that are beyond his nose. Hellen also accused her sister Mary of deploying her husband’s powerful position to influence their family property administration.

Some of the contested properties are 14 acres of land in Mumias and houses in South C, South B, a plot in Mlango Kubwa as well as two plots in Mathare, Nairobi.

Hellen accused Mary of plotting to kick her out of their South B house through every possible means including a stage-managed attempt to reunite her with her estranged husband.

“She is hellbent to see me out of the family house but I am here to stay taking care of my sick mother. I will not be cowed,’’ ranted Hellen.

In her defense, Mary Chebukati claimed that Hellen has been stealing money from the ailing mother through mobile banking and in 2017 and that she wasted family’s millions of shillings when she ventured in politics after being fired from Kenyatta University over sexual harassment.

Kenya Insights allows guest blogging, if you want to be published on Kenya’s most authoritative and accurate blog, have an expose, news TIPS, story angles, human interest stories, drop us an email on [email protected] or via Telegram
Related Content:  US Embassy In Nairobi Issues New Requirements For Issuing Visa
Related Topics:hellen otoloIEBCmary chebukatirose otolowafula chebukati
Up Next