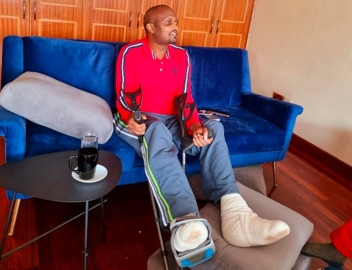 Moses Kuria in hospital with burn injuries from ceragem’s electric mat crippling him.

The CEO of Ceragem limited Vincent Omallah had a rough time while appearing before the National Assembly’s committee on health.

Omallah appeared before the committee on Tuesday October 26 to shed more light on Ceragem limited’s product that led to the burning of Gatundu South MP Moses Kuria’s feet.

During the sitting, Members of Parliament were informed that the electric blanket was banned in Texas, US.

In 2005, the Attorney General of Texas banned Ceragem in his state for making inflated claims such as being able to cure cancer, epilepsy, obesity and heart disease.

It was further established that Ceragem limited was operating across the country without an approval from the Pharmacy and Poisons Board as required by the law.

The MPs were also informed that Ceragem staff have no medical background despite posing as alternative medicine suppliers.

Answering the question on how their staff manage to attend to clients without medical qualifications, Omallah said that the products come with instructions manuals for clients downplaying the need for trained health personnel.

He further said that their products are certified by Kebs at the point of entry into the country.

This comes after Kuria revealed that he has taken action against the company over the burning incident.

The lawmaker said that he wrote to DCI to probe into the criminal elements of the company’s dealings.

He demanded to know why the company that was banned in Texas was freely operating in the country.

“Their products were banned in Texas for fraudulently making claims of curing cancer. The company must take responsibility, I have contacted DCI and the criminal process is taking place,” Kuria, who is still admitted at the hospital, said.

Kuria bought the electric blanket as a solution to numbness in his feet. After standing on the blanket for four hours, his feet exploded and he had to be rushed to the hospital where it was established that he suffered a third degree burn.

Ceragem has been operating in the country for the last 14 years and has shops in Nairobi, Thika, Mombasa, Eldoret, Murang’a, Eastleigh and Garissa.

Related Content:  Betting Firms SportPesa And Betin Kenya Halt Operations In Kenya
Kenya Insights allows guest blogging, if you want to be published on Kenya’s most authoritative and accurate blog, have an expose, news TIPS, story angles, human interest stories, drop us an email on [email protected] or via Telegram
Related Topics:ceragem kenya company limitedMoses Kuria
Up Next