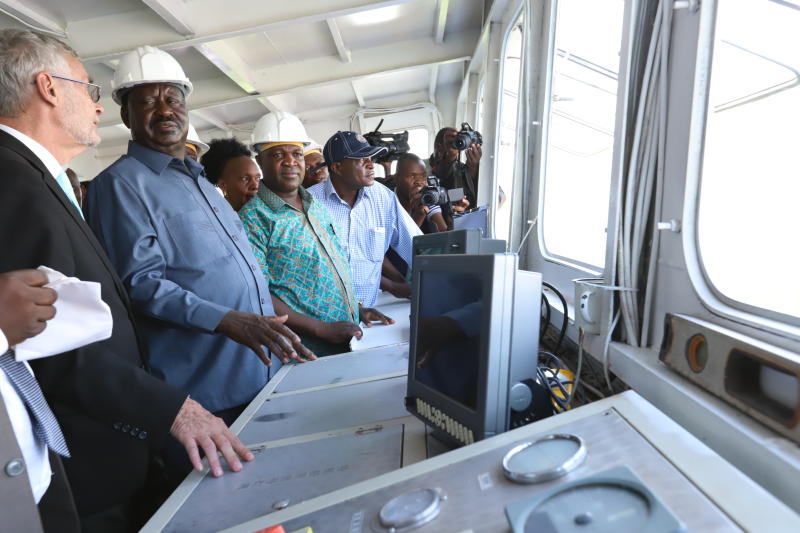 ODM party leader and the AU’s High Representative for Infrastructure Development in Africa will host four presidents from East Africa in the official launching ceremony of the Sh3 billion Kisumu port.

The Kisumu Port is one of the biggest rather the face of Raila, projects initiated in the former Nyanza province after the handshake. This is seen as part of the handshake goodies that he had promised and the project is expected to restore the glory of Kisumu City, the once vibrant East Africa hub, an area that had been deliberately marginalized by the previous administrations.

According to sources speaking to the media, RAO will be hosting his close political allies and friends of his allies. On Thursday next week, former Prime Minister Raila Odinga will host President Uhuru Kenyatta of Kenya, Yoweri Museveni leader of Uganda Uganda, Felix Tshisekedi of Congo, and John Magufuli from Tanzania.

Everyone knows that Magufuli and Tsisekedi are Raila’s family and political close friends and even though, Raila might to be in good terms with Museveni, but from recent visits in Kenya and signing some deals, we all know his ties with President Uhuru are way too close and the Port, being the biggest project in Lake Victoria, he definitely wouldn’t miss the opportunity and time to attend.

Yesterday, State House spokesperson Kanze Dena, who is in Jamaica with Uhuru said final communications on the launch of the port will be issued next week. Already Kenya Ports Authority has installed forklift trucks, mobile cranes and tractor-trailers in a clear signal that it’s all systems go.

KPA managing director Daniel Manduku told the Star on Thursday the port will initially create between 100 and 200 direct jobs when officially opened. “We are ready and all the equipment needed is on-site,” said Manduku.

Lake Victoria is the second largest freshwater body in the world with 13 ports and for Prime minister, Raila has been following the project so close and keenly. RAO has visited the site more than four times and receives updates on every step of the rehabilitation of the port.

Last Thursday Raila, President Kenyatta and DP William Ruto visited the port to inspect the progress of the repairs and Ugunja MP Opiyo Wandayi stated during the visit that the makeover of the port was a clear testament that the handshake is working

“We are happy with the speed at which this project, among others, is moving. This is a clear testament of what the handshake between the President and the Prime Minister has done. This is one of the major projects that will not only open up the entire western region but will create employment for the thousands of youths and increase trade between Kenya and neighbouring countries.” Wandanyi said.

If the Port project works, Raila will have a smooth way for the people of Nyanza, Western and most probably other regions who will be employed directly or indirectly by the Port. Raila has also assured his Nyanza political turf that his strong-willed plans to revive collapsed Kisumu Cotton Mills (Kicomi), are well on course and the Government is also setting up an industrial park in Muhoroni, Kisumu county.

According to Raila handlers, all the key projects that the region has received are on course due to the famous March 2018 handshake between President Uhuru and Raila Odinga. Some of the projects include the construction of the Koru-Mamboleo road, Kabunde airstrip where Sh128 million has been allocated to pay off the landowner and Sh4 billion allocated to the blue economy.

Water Hyacinth had also choked the lake. Almost all the beaches had been filled with the deadly weed. Lake Victoria Beach Management Units Chairman Tom Guda said for a month now, fishermen in Karachuonyo and Kochia have felt the pinch of water hyacinth infestation.

“Water hyacinth restricts the movement of boats. How do you cast your nets in water infested in hyacinth? Sometimes you set out to go fishing only to be trapped in the water for eight hours,” said Mr Guda.

According to the Kenya Marine and Fisheries Research Institute Kisumu (KMFRI), periodic changes in wind patterns and human activities encourage the re-germination of the stubborn weed on Lake Victoria.

Related Content:  Fact Check: Does Raila Own Majority Of Gas Companies In Kenya

According to Dr Aura, by January this year approximately 10,360 hectares of the lake was covered by water hyacinth that tends to settle where there is little pressure from the wind.

“The National Environmental Management Authority (Nema) has designated water hyacinth disposal sites. After removal of the weed you are not allowed to throw it away,” said the environmental authority.

Since the Port project was launched, the government has taken measures to hyacinth that had choked the Lake by setting up licensed water hyacinth disposal sites in Homa Bay County. This includes Alara Beach, Oginga Beach, Ngegu Beach, Rakwaro Beach, Achuodho, Kananga and Rarimba Beach.

“We are happy with the progress made so far. The port, a major project in the region, is shaping up and we hope soon our leaders, the President and the former Prime Minister, will be commissioning,” ODM chairman and Suba South MP John Mbadi said

The seriousness of the Port projects can also be felt and seen from a far, NYS and prison workers are clearing bushes around the port and the gates to the port remain locked to members of the public and thorough checks are done before one is allowed access.

Kenya Coast Guard has also been given a go-ahead and has already taken charge of security at the port ahead of the launch and taking pics and videos of the site is a prohibited act.

The project has seen structures around the port demolished including the famous Lwang’ni beach which saw traders lose millions of shillings without alternative places to go.

“Our expectation is that the port is effectively managed to give employment opportunities to our youths and even chances to the business persons whose structures were demolished,” he said.

On June 14, Uhuru and Raila were at the port t to check progress and on July 6, the President made an impromptu tour after a two-day visit to Tanzania. The President also toured the Kenya Marine School and the dry dock where the giant MV Uhuru is docked. He held meetings with officials and was briefed on the project.

President Uhuru ordered the repair of the 1,000-tonne and 91-meter-long cargo ship of which the MV Uhuru engine was switched on and roared for hours.

“Kisumu port was the biggest dry dock inland in the entire African continent where vessels such as SS Usonga, SS Nyanza, MV Victoria and MV Uhuru amongst others were manufactured. We want to see this happening again here,” Raila said.

Kenya Insights allows guest blogging, if you want to be published on Kenya’s most authoritative and accurate blog, have an expose, news TIPS, story angles, human interest stories, drop us an email on [email protected] or via Telegram
Related Topics:Felix TshisekediJohn PombeRaila OdingaYoweri Museveni
Up Next

Video Proof Of Joe Mwangi and Wendy Waeni In Rwanda