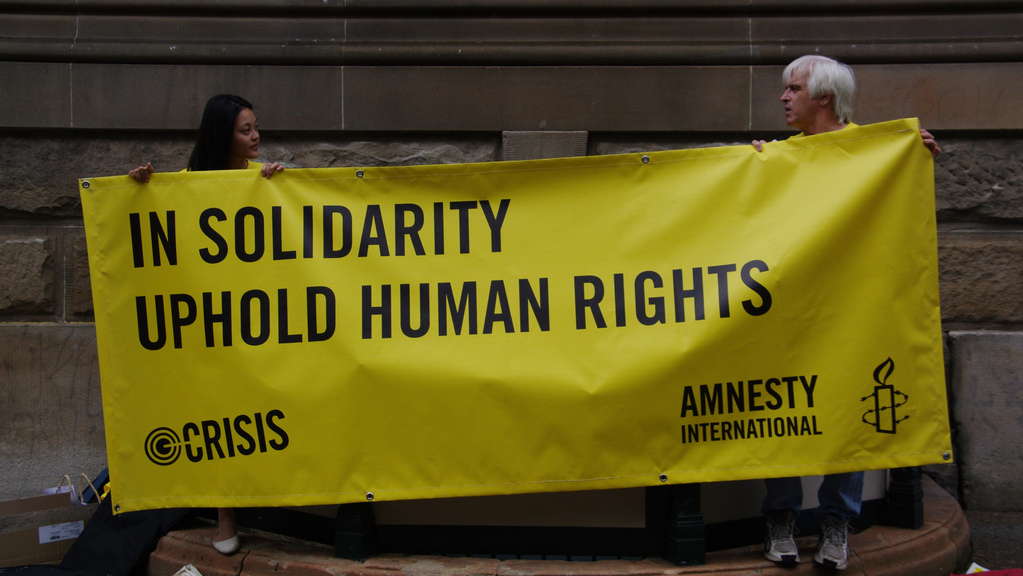 Amnesty International has a culture of white privilege with incidents of overt racism including senior staff using the N-word and micro-aggressive behaviour such as the touching of black colleagues’ hair, according to an internal review into its secretariat.

It came as eight current and former employees of Amnesty International UK (AIUK) described their own experiences of racial discrimination and issued a statement calling on senior figures to stand down.

One of the whistleblowers, Katherine Odukoya, said: “We joined Amnesty hoping to campaign against human rights abuses but were instead let down through realising that the organisation actually helped perpetuate them.”

Representatives of both arms of the UK-based human rights organisation apologised and pledged to make changes, with the director of AIUK citing “the uncomfortable fact that we have not been good enough”.

• Senior staff using the N-word and P-word, with colleagues labelled over-sensitive if they complained.

• Systemic bias including the capability of black staff being questioned consistently and without justification, and minority ethnic staff feeling disempowered and sidelined on projects.

• A lack of awareness or sensitivity to religious practices resulting in problematic comments and behaviour.

• Aggressive and dismissive behaviour, particularly over email and often directed towards staff in offices in the global south.

In June last year the international board of Amnesty International sent an email to staff addressing the Black Lives Matter movement and racism. Citing the killing of George Floyd, it said racism was encoded into the “very organisational model” of the human rights body, which had been shaped by the “colonial power dynamics and borders” that were “fresh” at the time of its founding in 1961.

It continued: “Despite some notable and hard-won changes in recent years, control and influence over our resources, decision-making … has remained overwhelmingly in the hands of … people from the white majority Global North.”

It said there had been bias and insensitivity in the way some people were treated at the international secretariat – the arm of the organisation which sets policy and hires researchers from hubs across the world, with headquarters in London.

The board went on to inform staff that an independent review would take place. Over the next few months, workplace experts from the consultancy Howlett Brown conducted a “temperature check”. They were given access to staff surveys and carried out six focus groups made up of 51 staff including two exclusively attended by black staff.

Published in October 2020 but not press released, the 46-page internal report by Howlett Brown, focused on Amnesty’s international secretariat, summarised: “Remarks (in the focus groups) were consistently shared that the external face of Amnesty (International Secretariat) is very different to its internal face.” The experts recommended that to resolve issues there would need to be a recognition of the “systemic privileges that exist”.

A statement released alongside the report by the Amnesty International coalition leadership team said it was “sobered” by the findings, adding: “It is a timely reminder that discrimination, racism and anti-Black racism exist in our organisation. It has highlighted both the extent and systematic nature of racism and indicates we must address white privilege wherever it exists.”

They described feeling “dehumanised” over their race and ethnicity over a number of years, with some reporting official grievances.

In a joint statement, two current and six former employees of AIUK called for the director, senior management team and board to resign, claiming the leadership “knowingly upheld racism and actively harmed staff from ethnic minority backgrounds”.

Odukoya, who worked within the campaigns and community organising teams at AIUK, said that as a black woman she was constantly mentally exhausted navigating an environment that was “hostile to blackness”. “There’s a hegemonic white middle-class culture that seemed to be protected and reproduced. White privilege was pervasive,” she said.

Odukoya described colleagues at AIUK commenting on her hair and requesting to touch it, making negative references to her “urban” accent and referring to her as the “black girl”.

In 2019 she raised a grievance concerning racial and gender discrimination, alleging that she had been manipulated into working above her pay grade without the correct remuneration. AIUK did not uphold the claim but reached a settlement with Odukoya in May last year.

Kieran Aldred, who worked for AIUK as an advocacy officer for three years until 2018 and is now head of policy at the gay rights charity Stonewall, alleged along with the other current and former employees that AIUK’s leadership was actively harmful to staff from minority ethnic backgrounds.

Aldred, 31, claimed that minority ethnic staff were overlooked for promotions, with pay reviews consistently favouring high-earning white senior leaders. He said the leadership had exonerated themselves of wrongdoing.

“Working for AIUK destroyed my self-confidence, my belief in my capabilities. I didn’t think I was skilled enough to do my job, that any organisation would ever hire me, let alone promote me, and I suffered from ongoing depression and anxiety,” said Aldred.

Kate Allen, the director of AIUK, apologised, saying these were serious and challenging concerns and, although she could not discuss individual cases, the allegations of discrimination would be taken seriously and investigated. “We know that institutional racism exists in the UK and, like any other organisation, we aren’t immune to this very real problem,” she said.

“We recognise that we have not done enough to ensure that our organisation is a truly inclusive one where everyone receives the same level of respect and opportunity, is valued equally and is able to be heard. We are reckoning with the uncomfortable fact that we have not been good enough and from this, we understand that we must change to become better.”

In response to the Howlett Brown report, Allen said the international secretariat had also taken significant measures to act on its findings. While the report did not look at AIUK, Allen recognised that it must also adapt, and had undertaken a review of its structure and governance in relation to racism.

Amnesty International said it wholeheartedly apologised to any staff who experienced discrimination. It said the accounts detailed in the Howlett Brown report were “unacceptable” and it acknowledged that across many levels there was not full equality. It said that allegations of racist language had been dealt with in line with its human resources policies and following the report it had committed to actively tackling the root causes of the issues identified.

In February 2019, it was revealed that Amnesty International had a “toxic” working environment. A review into workplace culture, commissioned after two staff members killed themselves in 2018, found widespread bullying.

… we have a small favour to ask. Millions turn to the Guardian every day for vital, independent, quality journalism. Readers in 180 countries around the world now support us financially.

Now is the time to support a free press and truth-seeking journalism. With no shareholders or billionaire owner, we are free from political or commercial influence. We can investigate, challenge and expose those in power, and report without fear or favour.

And because we believe everyone deserves access to trustworthy, fact-led news and analysis, we keep Guardian reporting open for all readers, regardless of where they live or what they can afford to pay.

We rely on readers’ generosity to power our work and protect our independence. Every contribution, however big or small, makes a difference for our future.