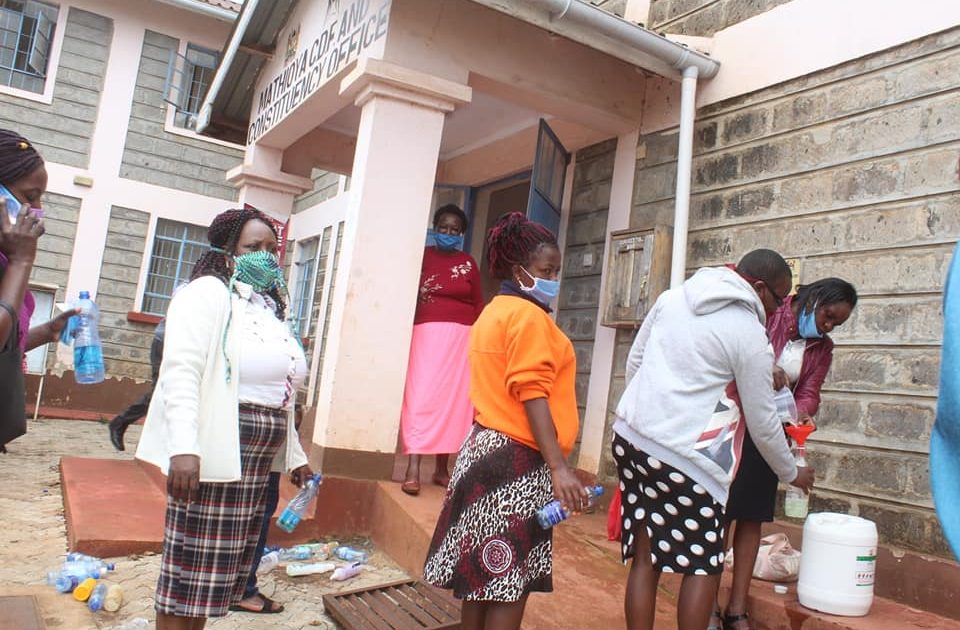 Concerns have been raised after alcohol addicts in Mathioya sub county of Murang’a resorted to quenching their thirsty with sanitizers being distributed to fight spread of Covid-19.

The addicts, who claim they cannot go for a day without taking liquor have attributed their new trend to closure of bars as the country mitigates the spread of coronavirus.

Several agencies and government departments have been on the ground distributing sanitizers to substitute washing of hands in fight against Covid -19.

A week ago, the area MP, Peter Kimari led in the exercise of distributing government manufactured sanitizers to hundreds of residents.

It later emerged that due to high content of alcohol in the sanitizers, some residents addicted to alcohol opted to start consuming the chemical.

The  Mathioya Deputy County Commissioner (DCC), Kipchumba Rutto has warned those taking the sanitizers saying the substance was not good for their health.

Rutto noted that the sanitizers are harmful for human health and urged those who may already have consumed the same to urgently seek medical attention.

“The reports of people taking sanitizers are quite shocking. We have directed our chiefs and their assistants to arrest the culprits and take them for medication before facing the law,” added the deputy county commissioner, adding sanitizers are specifically for applying on hands and for cleaning services so as to combat spread of coronavirus.

On his part, the local MP condemned residents who are flouting government’s protocol on covid-19.

Kimari said those consuming sanitizers are frustrating government’s efforts to combat coronavirus and legal action should be taken against them.

“I appeal to security officers to move with speed and apprehend individuals found abusing sanitizers and press charges against them. The sanitizers are very harmful and may endanger those taking them,” added Kimari.

One of the residents, James Kamau said addicts are finding it hard to cope with current situation after government closed drinking dens.

He noted that the consumers have argued that the sanitizers had stronger alcoholic content than ordinary brews, and since they cannot access expensive liquor being sold in supermarkets, they opted to consume them as the alternative.

Another resident, Doris Gathambi said she was surprised to see people drunk as early as 8am and yet bars were closed, only to realize they have been imbibing sanitizers.

“The chemicals used in disinfectants are dangerous and people should be told the truth about the adverse effects of consuming them. It affect their health in the long run,” added Gathambi.