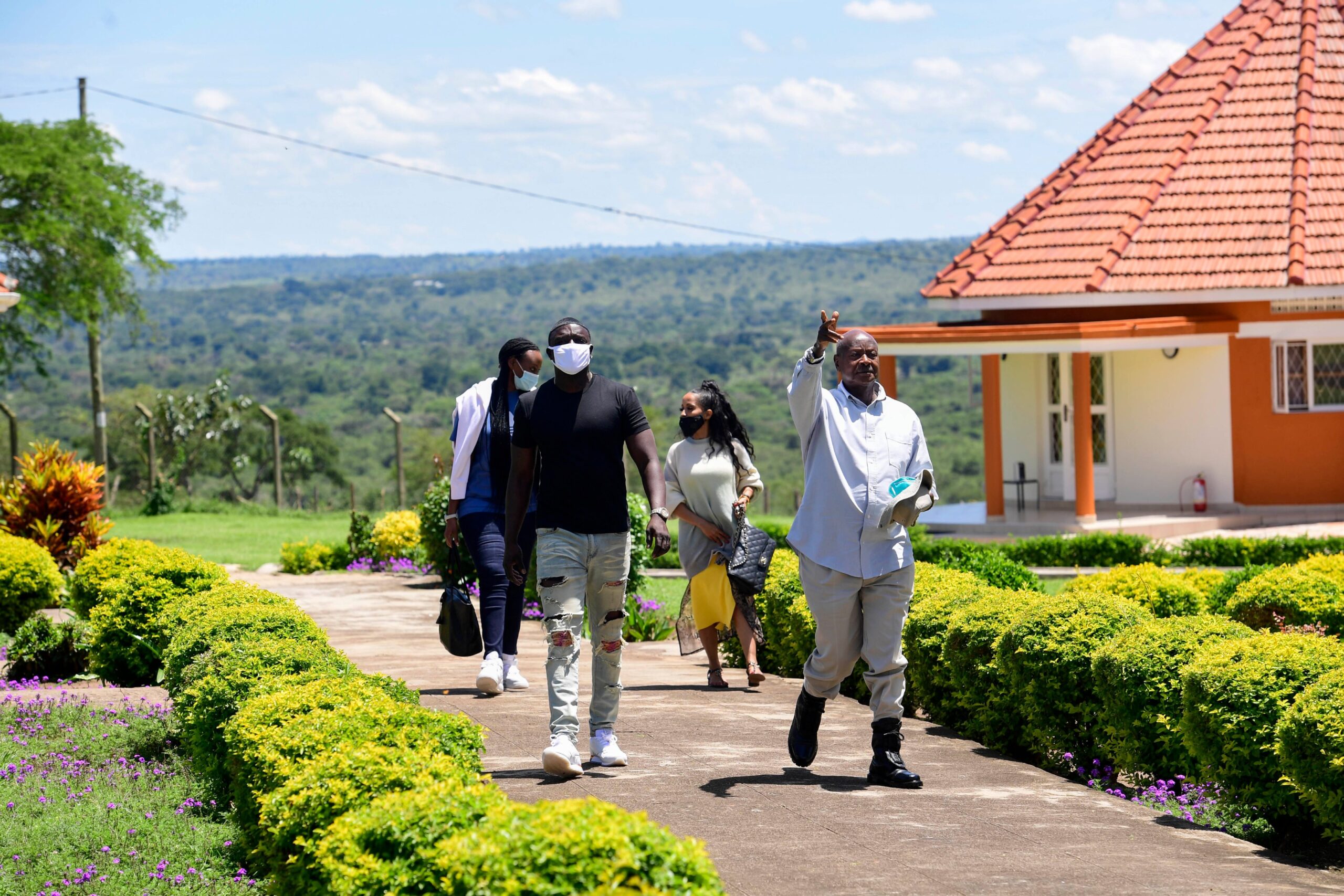 Musician Akon with President Museveni in Uganda during his visit.

Vanguard Africa and The Human Rights Foundation (HRF) are aware that you and your wife, Rozina Negusei, visited Uganda from April 2 to April 6, 2021 to discuss business and investment opportunities with Ugandan President Yoweri Museveni who appointed you as Uganda’s special envoy on tourism and culture. President Museveni also promised to find land for you to set up your investments, which reportedly includes the development of a futuristic, cryptocurrency-based city in the country.

We are writing to express our urgent concern about the association of your brand with President Museveni’s brutal regime. Museveni has exploited your meeting with him for official propaganda, as his regime seeks to capitalize on your global prestige to whitewash its image and distract from its most recent wave of repression. In recent months, state security forces have killed dozens of demonstrators, abducted hundreds of opposition supporters, and brutalized, beaten, jailed, and tortured untold numbers of Ugandans, including musician Bobi Wine, who also happens to be the country’s main opposition leader. As we write this today, several of Wine’s colleagues and music collaborators — Sir Dan Magic and Nubian Li, as just two examples — remain behind bars on trumped-up charges and have been repeatedly denied bail since December 2020.

While Yoweri Museveni may appear to some as “an honorable” and “knowledgeable leader,” as your wife and business partner publicly described him after meeting him this past February, he has ruled Uganda with an iron grip since he seized power in an armed uprising in January 1986. Over his 35 years as ruler, Museveni has sought to legitimize and extend his power through constitutional amendments and orchestrated elections marred by fraud, voter intimidation, censorship, and the jailing of his main political rivals.

In January 2020, Uganda’s subservient Electoral Commission declared Museveni the winner of presidential elections in which he was seeking a sixth term. Museveni called the election “the most cheating-free” since independence from Britain in 1962. In fact, the elections were unfree and unfair by all measures. They followed the most murderous and violent repression against civil society and political opponents in decades, and took place amidst a regime-ordered internet and information blackout, and ended with Bobi Wine being placed under house arrest for 11 days. Because of these and other related crimes, a legal complaint has been filed at the International Criminal Court against Museveni and his henchmen.

Your wife has committed $12 million to help develop Uganda’s entertainment industry, stating that, “when you develop an artist, you develop a nation.” During your meeting with Museveni, you spoke about being an artist who uses his voice “in a big way” for positive change. Please know that artists who try to do — in Uganda — what you do in a democracy without fear of retaliation, are frequently imprisoned, censored, or even killed. This has been the unacceptable norm under Museveni for decades.

No artist has suffered more persecution than Uganda’s biggest pop star, Bobi Wine, nicknamed “the ghetto president” because of his popularity and status as the leader of Uganda’s People Power Movement — a nonviolent political movement seeking democratic change. Museveni’s regime has banned Wine’s music — songs expressing Ugandans’ demands for justice and democracy and an end to tyranny — from TV and radio, and outlawed his concerts in the country. To date, over 150 of his shows have been canceled by state officials. To make a living, Wine must now perform abroad. Musician Nubian Li, a close associate of Wine’s, is currently in jail on trumped-up charges for allegedly possessing four bullets. The late musician Ziggy Wine, another close friend of Wine’s, was abducted, severely tortured, and killed in July 2019. Officials have failed to conduct any credible investigations into his murder.

Furthermore, Museveni’s regime has for several years now sought to impose strict censorship regulations on artists and performers. For example, the 2019 “Stage Plays and Public Entertainment Rules” required artists to seek a permit and submit the content of any public performance for vetting by the government’s Communication Council. Penalty for non-compliance carried a fine and/or a 6- month jail term. Officials were forced to withdraw the regulation in August 2020, but only after protests from local artists, as well as global music icons, including Bono, Seun Kuti, and Peter Gabriel.

Bobi Wine has also endured terrible repression as an opposition politician — most recently as the leading opposition candidate in Uganda’s January 2020 presidential election. Throughout the presidential campaign, Museveni’s regime deployed security forces to harass and intimidate Wine, his campaign team, and supporters. They suffered multiple forms of repression, such as repeated arrests, tear gas, stun grenades, beatings, and deadly shootings. The worst case of political violence came in November, when security forces shot dead more than 50 people while dispersing protests against Wine’s arrest. Today, about 3,000 opposition activists, demonstrators, and Wine supporters are still missing, reported to have been arrested or abducted by state security agents.

In light of the above, we urgently and respectfully request that you: explicitly make clear that any business relationship with the Ugandan government is not an endorsement of Museveni’s brutal regime; ensure that your investments provide economic opportunities to Ugandans and not just enrich their oppressors, namely, Museveni and his swaths of cronies; use your voice and platform to support or visit Ugandan artists imprisoned or persecuted for simply performing their art — a right you no doubt take for granted in the United States and other democracies; and use your extensive following on social media to galvanize further support for courageous Ugandans struggling for a country free of dictatorship, censorship, and state brutality.

You are a public figure with a great deal of social goodwill. We celebrate that BET even awarded you its global humanitarian award in 2016. In the wake of the police killing of George Floyd, you committed your art, voice, and platform for justice. You released a music video, “Ain’t No Peace,” condemning police brutality, and signed an open letter, along with 91 prominent African artists, media personalities, academics, and leaders, expressing solidarity with African Americans and the Black community globally. However, you are now publicly associating with, and literally embracing, a tyrant who commands police squadrons and battalions who kill pro-democracy demonstrators with live rounds with impunity.

You have also done a great deal of philanthropy in support of local communities across Africa, including through Akon Lighting Africa, which supports solar energy projects across the continent. However, by associating with Museveni’s dictatorship, you will be unintentionally helping to whitewash the public image of a regime with a record of systematic and murderous repression — one that has been in power longer than most Ugandans have been alive. These should not be the values that align with your brand.

Your investments in Uganda have the potential to improve the lives of many Ugandans, especially since their government has repeatedly failed them. Considering the information above, we reiterate and urge you to take the following steps:

Your global influence provides you with a unique opportunity to make a difference in Uganda. We urge you to use your platform for the betterment of Ugandans in general — not the regime that oppresses them.