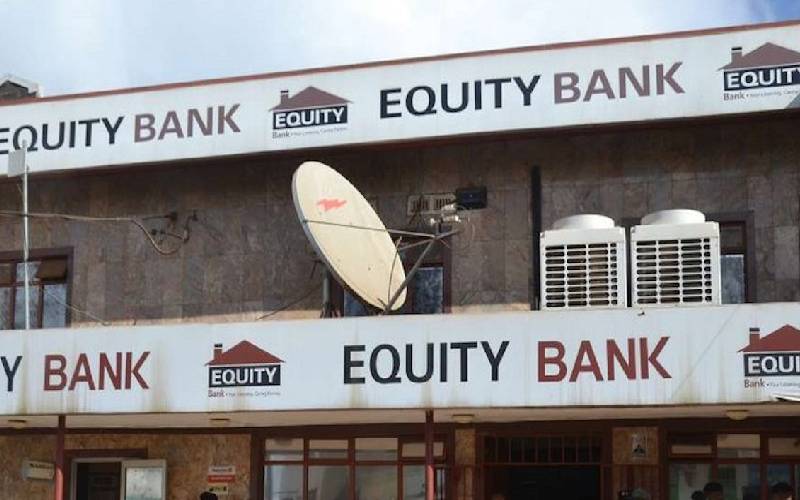 Equity Bank Kenya is stealing from customers. Multiple reports by customers over missing cash from their accounts flood their customer care social media. This is not the first the Bank is on the spot for allegations of stealing from its customers and paying them off with bad customer service.

Kenyans often take to social media to share stories about their horrible experiences with the giant financial institution. Shocking incidents of money mysteriously disappearing from their accounts and being asked to pay loans they didn’t apply for.

One Kendi Gichobi took to Equity’s social media account late Saturday morning after money she had entrusted the bank with was withdrawn without her knowledge. In the tweet she furiously accuses the bank of not assisting her for a whole month and even blocking her calls.

Your money is not safe @KeEquityBank. 20,000 was withdrawn from my account without my knowledge and the bank has not refunded the money, despite waiting for the 30 days. It has even now blocked my calls. Retweet widely!!!#tokaequity

This is just one case of the amount of theft going on at the bank.  Earlier this year  Lydia Mathia, posted on facebook how the bank okayed withdrawal of her father’s Ksh34,000 in what looked like an inside job. Ms Mathia’s dad discovered that he could not use his Equitel pin and decided to visit Limuru branch where he had opened the account. The customer care attendants dismissed him rudely and told him off. After finally sorting things out by renewing the SIM card, the dad got a notification to repay an outstanding loan of Ksh34,000.

Another client was late last year met with a rude shock after Ksh400,000 went missing from his account. His money was withdrawn using the Equitel platform barely two days after being issued with an Equitel line. The client claims he was initially able to even check his balance using the issued Equitel line but it later malfunctioned and before he knew it he was Ksh 400,000 poorer.

Here’s a list of other Kenyans complaining about the same:

Joyce Gathumbi says: “My dad’s money was withdrawn… 180k and a loan of 40k on top. And instead of helping him to track it they keep telling him his loan is due.” 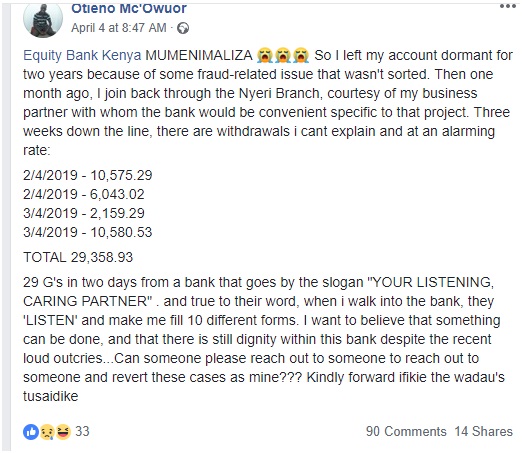 WHAT IS HAPPENING AT EQUITY BANK? WHY IS CUSTOMERS MONEY GETTING STOLEN?

@KeEquityBank How cab you allow a customer hard earned money to be withdrawn from the account through fraud ways in collaboration with equity staffs? I have lost money in my account at equity bank and it pains alot

A friend of mine has been an equity customer for a while, when they came up with this equitel line thing,he decided to try it out hoping it will be of help only fo him to find out his earlier savings was withdrawn like a decade ago including an overdraft of 7k

Avoid Equity bank at all costs. I have more than 6 friends who lost money mysteriously ???.

Good morning, hope you've withdrawn all your cash From Equity Bank and for those who were planning to open an account there, kindly don't even dare do that.

In a new scheme, Transfers from the bank to mobile money often takes long hours on end, some lasting up to two weeks. This kind of fraudulence should not be tolerated, In fact trust them with your money at your own risk.

Related Content:  Saitoti’s Widow Summoned By Court Over Alleged Child Abduction
Kenya Insights allows guest blogging, if you want to be published on Kenya’s most authoritative and accurate blog, have an expose, news TIPS, story angles, human interest stories, drop us an email on [email protected] or via Telegram
Related Topics:equityequity bank
Up Next