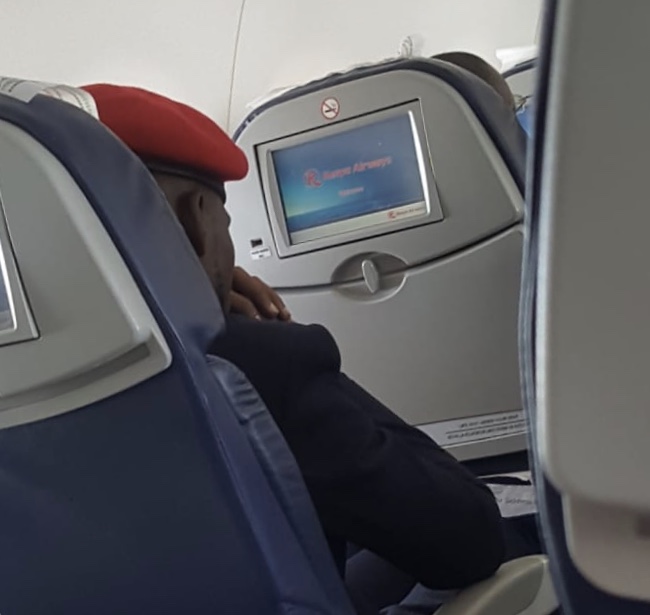 Bobi Wine moments before the plane touched down in Entebbe

Bobi Wine a prolific Ugandan legislature today made his way home after a trip to the USA where he had gone to seek specialized treatment following torture in the military camp where he was being held on treason charges which were trumped by the regime.

Bobi made a stopover at the Nairobi’s JKIA where he was received joyfully with airport staff and fellow passengers who scrambled for photos with him. Aboard Kenya Airways, Bobi sat calmly and later in the middle of the flight drowned into deep thoughts perhaps wondering what was awaiting when the plane touched down.

The writings were already on the wall, the government had banned public gathering and warned against turning out for Bobi’s grand reception which had been scheduled from the Entebbe airport.

Bobi Wine’s brother was arrested earlier this morning while making preparations for the welcoming of his brother. Police had also camped at various homes of leading opposition leaders stopping them from leaving to mobilize grounds for receiving Bobi Wine.

When the plane touched down in Entebbe, Bobi seemed uneasy perhaps the reality was hitting him that nothing had changed as the military had taken over the airport as if it was a high profile terrorist landing. The military was literally on the run way. The plane carrying Bobi was even taken to the far end of the airport where the military was waiting.

As soon as he got off the plane, he was met by army officials who first greeted him before turning into their custom beastly mode, bundling him into an awaiting military van and driving him away to unknown destination. Press was totally blocked and passengers were restricted from filming anything. Those found had their phones confiscated and photos deleted. We’re however, the Kenya Insights so we had our ways.

Related Content:  Why Staking Less Than 100Ksh Could Land You In Jail Or Cost You 5million Fine. 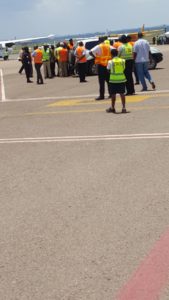 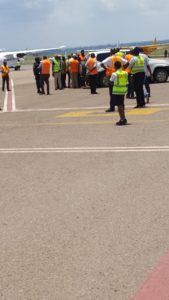 The Painful Death Of Monica Kimani, They Tied Her Hands, Slit Her Throat And Dumped Her Body In The Bathtub