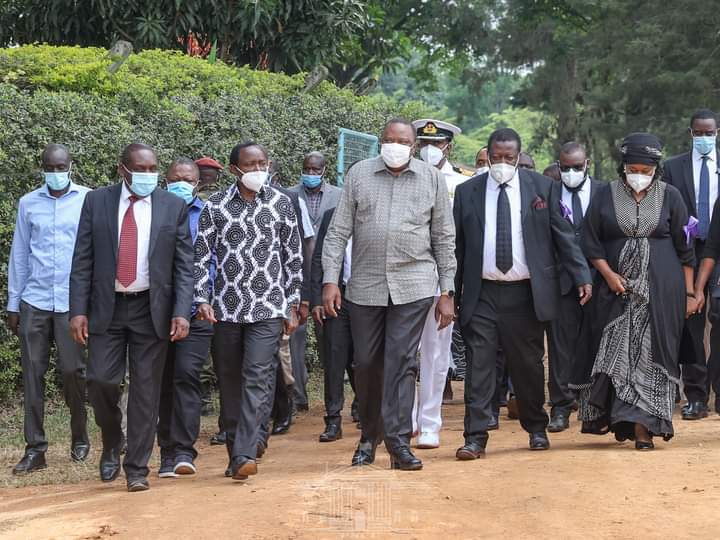 President Uhuru Kenyatta says the mission to unite Kenyans is unstoppable. Detailing the grounds that birthed the Building Bridges Initiative, the Head of State scoffed at leaders who have politicized his decision to bury the hatchet with opposition leader Raila Odinga.

Addressing mourners during the funeral of ANC leader Musalia Mudavadi’s mother, Annah, in Vihiga county, President Kenyatta maintained that their coming together under the now famous “Handshake” was out of realization that without unity the country cannot realize lasting development.

“When we finished the 2017 election, we had two options. One was for me to say I have been validly elected and go on and serve my full term. And I had the capacity to do that. But we saw how divided our country was and if that meant we had to close ranks with our competitors for the sake of peace, then I said so be it. That is why I met my brother Raila and made peace with him.” He narrated

According to the President, the new-found unity was not in any way meant to exclude others. Instead, he says their intention was to bring Kenyans together insisting that that was the foundation of BBI.

“We said we want a government where no tribe or community feels left out. We decided that we needed an election where the winner does not take it all. We want government with everyone on board.” The president charged

“That was our objective and no one can stop me from bringing Kenyans together.” He reiterated.

And the president did not stop here. He went responded to remarks that were made by a section of political leaders during the homecoming ceremony for the newly elected Msambweni Member of Parliament that appeared to attack members of the first family. Deputy President William Ruto had graced the occasion.

“As we closed the year, I heard some leaders in Msambweni saying Kenyans are tired of such and such family leading this country…elections are not about the womb that gave birth to you. It about Kenyans. There is no position that is given for free. Kenyans own the votes.” He said.

Seemingly enraged by the remarks, the Head of State called on leaders to cultivate the culture of respect towards others. He cautioned against personalization of the issue of leadership as this was a dangerous route to take and that this should never be the basis by which leaders seek public office.

“If such is the logic, then I can also say, only two tribes have led this country and we need other tribes to lead as well. What do you think? There are so many ethnicities in this country.” He said to a rapturous applaud.

And in an apparent reference to calls from a section of speakers for him to crack the whip in the ruling party, Uhuru was sounded a warning to detractors within his administration saying “Msione simba amenyeshewa mkadhani ni paka (do not mistake a rained on lion for a cat.. Everything has its time.”

He said Kenya was a democracy and that was why people are free to engage as they wish but was quick to point out that he was not going to be pushed to a corner. Once again stressing that he maintained full control of the affairs of the state.

“I am in charge of this government and I am in control of what we are doing. I don’t want anyone lecturing me. I know where I am and I am very clear about where I am going.” He said

He said some of the leaders who have turned on him could not secure a vote without his support. And he says a decision on the direction the country will take rests in the hands of Kenyans and not them. But he was keen to note that he stills holds sway amongst Kenyans.

“They hold their positions because of me. They couldn’t master even a single vote. It’s my vote that’s why they are where they are.” He charged