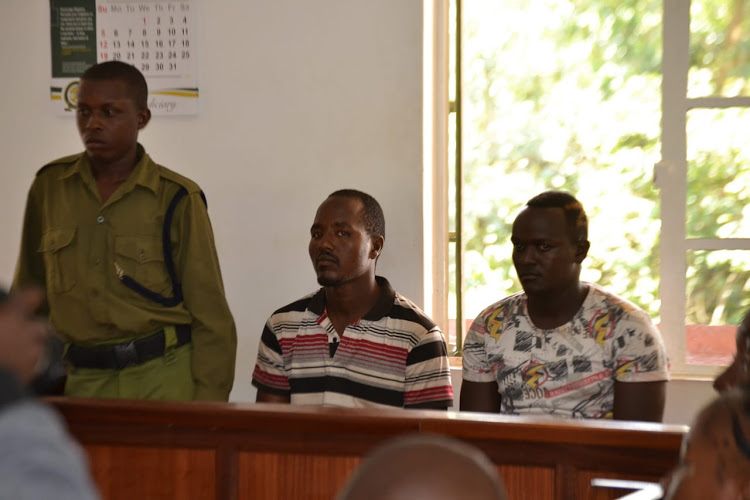 Two  suspects arrested in connection with the brutal murder and lynching of a middle-aged female primary school teacher in Mutitu, Kitui East  were on Thursday arraigned in a Kitui court.

Wambua Mwangangi and Chris Kyalo Muli are suspected to have been part of a mob that killed and lynched Daisy Mbathe, a teacher at Ndooni Primary School on  Monday January 6, 2020.

The mob, which reportedly comprised of parents of the school in which the slain teacher taught, is alleged to have perpetrated the crime over the school’s wanting performance in last year’s Kenya Certificate of Primary Education (KCPE).

The  Kitui Resident Magistrate, Felistus Nekesa  granted an application by Mutito criminal detectives to detain the suspects at Mutitu Police Station for 21 days pending conclusion of investigations into the murder.

The Teachers Service Commission (TSC) has also withdrawn six teachers from the Primary School  following the murder. “The commission strongly condemns the unfortunate death of the teacher as there are better ways of resolving whatever issue it may have contributed to the death of Madam Mbaluka,” read a letter from TSC.

The Kitui KNUT Branch Executive Secretary, Simon Nding’o, condemned the incident which he termed as serious threat to the entire Kitui teaching fraternity.

He  also lauded the Directed of Criminal Investigation (DCI) acting swiftly on the matter, urging them to leave no stone unturned until all culprits are brought to book.

The  school has since been closed.

Kenya Insights allows guest blogging, if you want to be published on Kenya’s most authoritative and accurate blog, have an expose, news TIPS, story angles, human interest stories, drop us an email on [email protected] or via Telegram
Related Content:  Who Is Next In Line To Take The Throne From North Korea’s Kim Jong Un, Here’s Her Sister The World Is Talking About
Related Topics:
Up Next