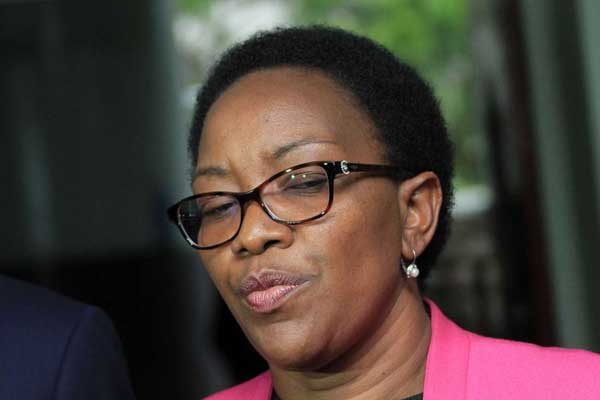 Health Cabinet Secretary Sicily Kariuki. She was the Minister for Public Service when Sh9 billion was paid out to dummy companies at the National Youth Service.

Let’s start with the good news, President Uhuru rolled out the Universal Health Coverage In Kisumu for piloting and the bad news is NHIF was ruled out of controlling the Sh30B project.

The National Hospital Insurance Fund (NHIF) has been excluded from handling Sh3.1 billion allocated for the universal health coverage (UHC) rolled on Thursday in four counties.

The Treasury will send about Sh2.1 billion or 70 per cent of the funds directly to Kenya Medical Supplies Authority (KEMSA) for the purchase of drugs and essential kits for hospitals in Isiolo, Kisumu, Nyeri and Machakos.

The exclusion of the NHIF was arrived at after the four counties expressed misgivings over governance issues at the fund.

On Tuesday, Geoffrey Mwangi, NHIF chief executive, his predecessor and 16 other officials were also charged with abuse of office an irregular award an extension of a contract in which Sh1.1 billion was lost.

Health Cabinet secretary Sicily Kariuki said the NHIF was not able to grow its membership beyond a certain capacity, which would have hindered the start of the universal health coverage this year.

It may look like any other story any other day, but behind the scenes, there was a powerful fight over the control of UHC funds and this was the plan all along by Health CS Sicily Kariuki, whose ministry is now entrusted with running the Universal Health funds, estimated at over Ksh 30 billion.

Geoffrey Mwangi is being charged with corruption at NHIF. However, DPP Noordin Haji could be charging the wrong man. All the issues given started as far back as 2001, during the reign of former President Daniel Moi, NHIF has been looted for the longest time. See this link and look at the history. Mwangi was not CEO then. 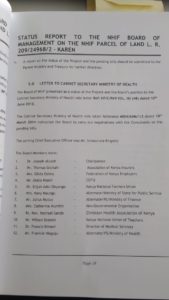 These are the real board members and former CEO Kirgotty responsible.

The charge sheet used to prosecute Mr Mwangi and the NHIF management, is not pointing to any criminal activity, only obstruction through an SMS sent to the Finance Director. However, there is no case there since the SMS itself was illegally acquired through hacking of Mr Mwangi’s phone.

Related Content:  How Sameer Group Of Companies Was Defrauded Sh80M By Conmen Posing As President Uhuru In A Corrupt Deal

The charge sheet itself, was delivered by Health CS Sicily Kariuki herself to the Board of NHIF. The question is, what is her direct interest? The plan all along has been to scandalize NHIF and its management to a point where it loses public trust, and have it dysfunctional.

Now that Mwangi and NHIF management is out of the way, Sicily is now taking full control and has even appointed two cronies as board members.

Once Ksh 30 billion UHC money is in MoH’s control, we’re in for NYS season 2. Remember who was in-charge when NYS lost Ksh 9 billion? MoH has successfully wrestled NHIF out of the way in what is a clear case of sibling rivalry. Now Kenyans should be prepared for round 2 of NYS, under the exact same architect – Sicily Kariuki.