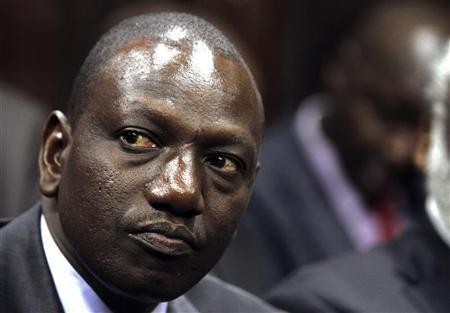 The Ministry of Water, Sanitation and Irrigation has moved in to reclaim over 2,700 acres of land in Ruai which was allegedly grabbed.

In what could easily be seen as dwindling grasp of power, the piece of land that was illegitimately taken over has since been linked to DP William Ruto and friend turned foe EX-MP Cyrus Jirongo.

GSU officers were had raided the said piece of land located along Kangundo Road bringing down the fence and structures that had been out down. Sources indicate that there’s an expansion plan on the plant by the government having acquired Sh20B loan from African Development Bank.

“The government today embarked on an operation to repossess over 3,000 acres of the Dandora Estate Waste Sewerage Treatment Plant, located in Ruai, which has been grabbed by private entities,” said a joint statement by Lands and Physical Planning Principal Secretary Nicholas Muraguri, and his Water, Sanitation and Irrigation counterpart Joseph Irungu.

While making the statement, state officials stressed on the need for expansion of the Ruai plant that has remained contested for long since its establishment in 1978.

“However, over the years, some groups of people have continued to illegally encroach into the above land taking up most of the land that was meant for the expansion of the treatment works,” said the statement by the PSs.

It added: “It is estimated that currently out of a total of approximately 4,240 acres of this land, only 1,637 acres is utilised for sewerage. Sadly, even the land in use has been encroached.”

The affected parcels; LR 28706, measuring 1,605 acres, is owned by Renton Company Limited, a company linked to the DP and other partners.

The other parcel is LR 28707, measures 999 acres and is registered under Offshore Trading Company Limited, which is owned by former Lugari MP Cyrus Jirongo.

Since 1993, Jirongo’s parcel deed has been held by KDIC over a Sh20B loan he owes Postbank. Ruto’s piece is also charged to unnamed local bank for a loan.

This is not the first time this land is coming to the public limelight, in 2015, Billionaire businessman Jacob Juma filed a case to reclaim the same land grabbed by Renton Company which is believed to be owned by the Deputy President but registered under the names of proxies.

In the suit papers, Mr Juma wanted the court to revoke the titles and order permanent injunction on the land. At the time, the value of the land was approximated to be Sh1.5B.

Is president Uhuru held hostage by these mafias of corruption? Uhuru, kindly return the public land grabbed by Weston and RENTON Co. back.

@Ibrahimjohnny @LeftistPolitics companies owned by this grabber of public land are: RENTON , EASTON, WESTON . It is called naivety. 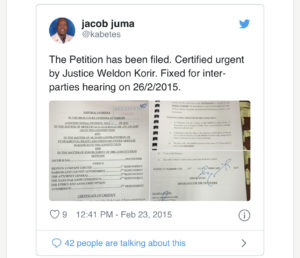 At the time, Jacob Juma who was a friend turned for, was turning inside out DP’s scrupulous deals. Aware of the political ramifications of the suit, Juma went out of his way to explain the background of the suit, attesting that it is the duty of citizens to protect embezzling of public utilities by individuals for private gain. Juma wanted the court to declare the rights of Nairobi residents to a clean environment has been threatened as the grabbed land was earmarked for construction of a sewer.

Related Content:  No Matatus To Be Allowed In Town, NMS Boss Orders 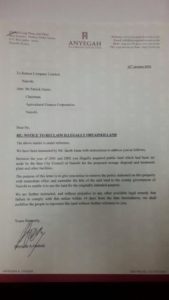 In Weston Hotel, Jacob Juma placed massive evidence and spirited effort against the DP to have the land repossessed by KCAA.

William Ruto MUST surrender KCAA land back to the gov't and people of Kenya. See the Auditor General's Report 2012. pic.twitter.com/qlAPd8Bu01

To Hon. Poghisio, as Chairman of KCAA, have you ever come across this Auditor General's Report? Self-explanatory !!! pic.twitter.com/8R0AE91FaC

Today, I have also petitioned Tobiko, DPP to prosecute William Ruto and his accomplices for stealing KCAA land. pic.twitter.com/13ZNAeAbaN

Handing over Weston land back to KCAA will be a huge boost to National Land Comm. on how to recover stolen land. They are tactless.

@UKenyatta HE Uhuru; Now that William Ruto has admitted being in partnership with Osero in WESTON hotel ownership, he should step aside too.

William Ruto MUST surrender KCAA land back to the gov't and people of Kenya. See the Auditor General's Report 2012. pic.twitter.com/qlAPd8Bu01

Jacob Juma was later to be assassinated in what has remained one of the many unresolved murders in Kenya’s history.