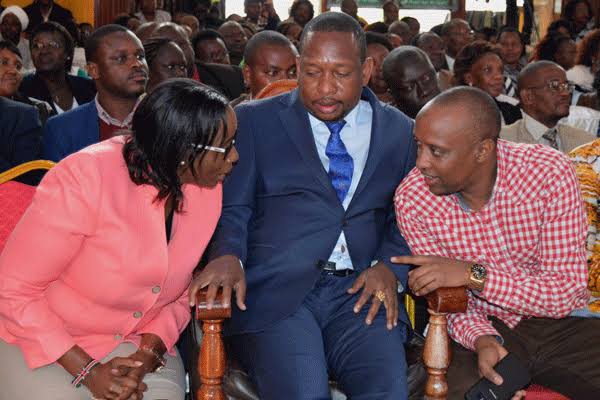 Power battles at the City Hall have taken a new shape following a change of guard effected by the Nairobi Governor Sonko. Speaker Elachi who was previously impeached but reinstated by the the high court, had officially resumed office this morning.

In a surprise move, Elachi was escorted to her office with ODM MCAs in an event that would later turn out to be marred with chaos.

Majority Leader Abdi Guyo who led the ouster of the speaker got wind and ganged up with with jubilee MCAs and stormed the speaker’s office before the rivaling groups engaged in exchanges that led to vandalism.

Elachi however stood her ground. Mike Sonko has intervened according to a letter written to the speaker by virtue of office and seen by Kenya insights terminating Guyo as the majority leader.

Sonko in his letter says Guyo has been a predicament in his implementation of jubilee policies and that his sustained attacks and intimidation towards the speaker and county staff can no longer stand.

Sonko has effectively nominated, Maringo Hamza MCA, Hon. Mark Ndung’u to take over from Guyo as the majority leader.

Kenya Insights allows guest blogging, if you want to be published on Kenya’s most authoritative and accurate blog, have an expose, news, story angles, human interest stories, drop us an email on tips.kenyainsights@gmail.com or via Telegram
Related Content:  Harvard Study Shows Men Who Smoke Marijuana Are More Fertile
Related Topics:
Up Next

Oguna: Kenya Navy Has Spotted And Identified The Number Plate Of Submerged Vehicle