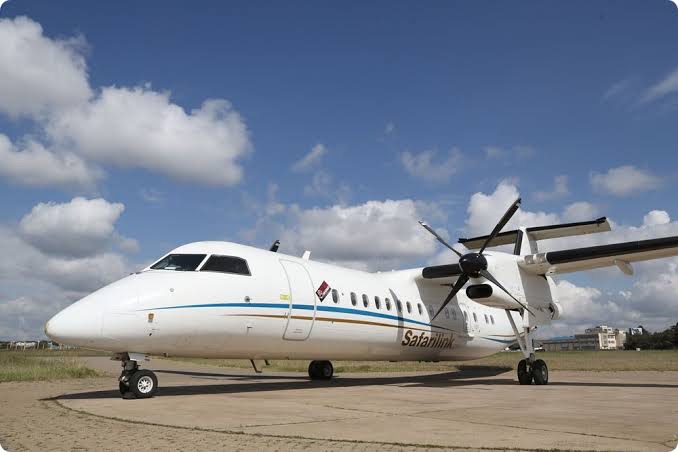 On Friday the 21st May, 2021 was perhaps one of the worst days for flamboyant Mombasa Governor Ali Hassan Joho “Sultan”. From disgrace of missing a flight after late arrival and being charged with contempt of court after being found guilty and risked 60 days imprisonment or Shs. 250,000 fine by Mombasa law court.

Maybe one the court judgement would have led to his second misfortune of the day but he just didn’t know where to tore the line.

He took to social media to complain to http://www.flysafarilink.com

In response to the governor, the airline noted that a complaint was not lodged so they could launch an internal query on the matter.

The airline did not waste time reminding him that he was late and that it would have been unfair to inconvenience others who were onboard.

According to Safarilink, the flight was scheduled to depart at 4 pm, and all passengers are required to check-in at least 30 minutes before departure time.

However, the flamboyant Governor arrived at the airstrip four minutes after the plane had taken off as scheduled and missed the flight – adding salt to an injury. 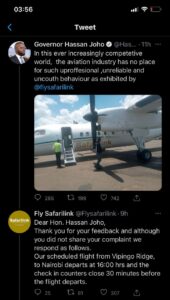 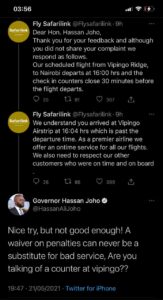 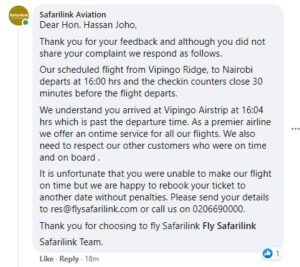 Ordinarily as per commercial aviation rules and regulations, when you’re late for flights you’re penalized but seems after fierce with county boss, safarilink has redefined the rules —you miss out with minutes, they reschedule your flights at no cost, something which is new and out of international aviation norms, not even big airlines consume such low grade damage control.

The rule has always been, despite social or political status, if you miss out on flights schedules, you’re penalized. Safarilink is simply breaking the norms to satisfy Joho’s ego.

Related Content:  Sarah Wairimu Wants Call Records Of Uhuru’s Relatives And DCI Kinoti Revealed In Cohen’s Case
Kenya Insights allows guest blogging, if you want to be published on Kenya’s most authoritative and accurate blog, have an expose, news TIPS, story angles, human interest stories, drop us an email on [email protected] or via Telegram
Related Topics:
Up Next