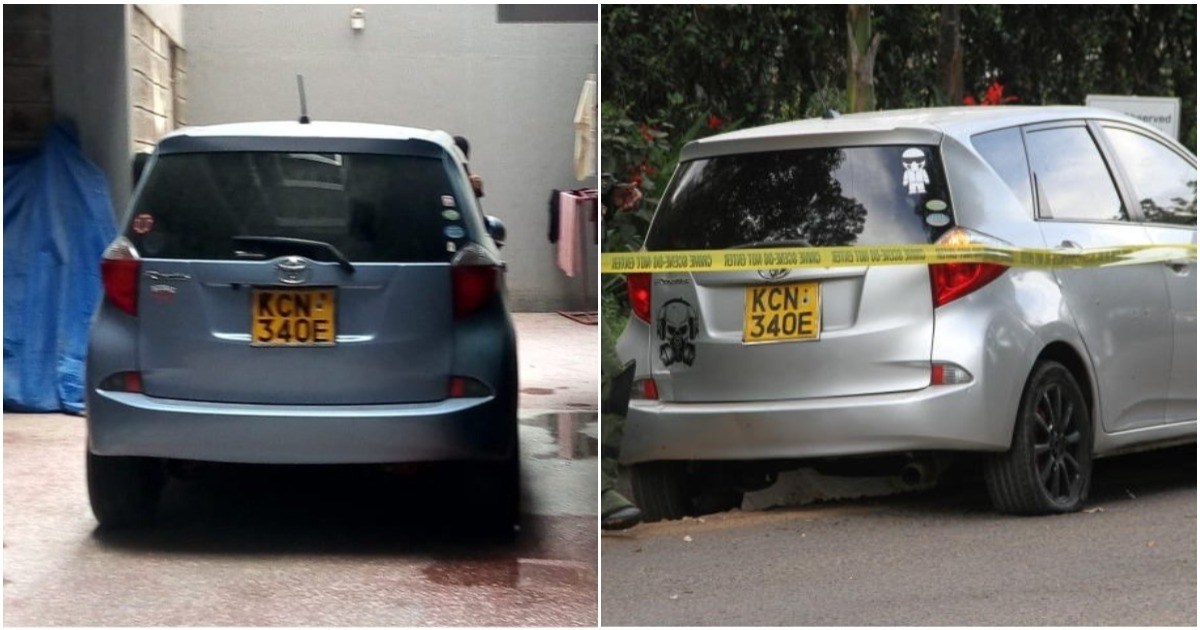 Car used by terrorists in Dusit on the right and the plate they cloned on the left.

Officers from the Flying Squad, the Anti-Terrorism Police Unit (ATPU) and the Directorate of Criminal Investigations (DCI), raided the NTSA offices in Upper Hill, Nairobi, to find out how the ring operates and eventually prosecute those involved in a crime that helped terrorists to stage the 14 Riverside Drive attack that led to the loss of 21 lives.

When the agencies raided, employees were caught unawares and ordered to vacate offices as the detectives combed the premise to piece up the links. At the end, 19 employees of the authority were taken away by police for questioning.

Dusit attackers had used Toyota Ractis (KCN 340E) to launch their attack in what detectives say was a duplicate of another car of the same make and similar description though different color that was impounded on January 16 in Kitengela, Kajiado County. It had the original number plate.

It has since been established that there’s an existing cartel that links officials at NTSA and criminals to clone car number plates and that’s how the Dusit attackers made it through.

The whole thing plays out like a movie, once the cartels are contacted by the criminals, crook NTSA officials in the racket that do a quick search of cars baring same descriptions but in different towns and clone the plates.

For instance, if one is in Nakuru and wants a cloned number plate, the registrar simply finds a match of a car in a different town say Garissa or even Busia. They also verify that the plate doesn’t have to be on police radar to avoid getting intercepted.

The vehicle specifications are then extracted from the owner’s logbook on the NTSA website, including colour, chassis/frame number, year of manufacture, transfer number, owner’s name, make, body type and other details.

A copy of the owner’s ID is also downloaded from the website by the insider. These details extracted illegally are then used to create a fake logbook elsewhere. With a fake logbook, they’ll report a lost or damaged number plate at a police station then use the abstract to apply for a new number plate at NTSA and that’s how the same vehicle ends up with similar number but different owners as it happened in the DusitD2 case.

Once back at the NTSA for a new plate application, the applicant is charged a fee which is determined by how many people in the web were involved.

KRA then gives details of the previous owner which is then used to get certificate without inspection as insiders innthe inspectorate department lias to evade this scrutiny net. This is because electronic inspection always detects when the vehicle’s chassis number is different from the one in the logbook

Ring also ropes in insurance brokers who play their part by giving the cloned plate car owner with insurance sticker. In January alone, Flying Squad has impounded 26 cars with duplicate number plates which is disturbing because your car could possibly be cloned without your knowledge and you could easily get in trouble with the state over a crime you weren’t part of.