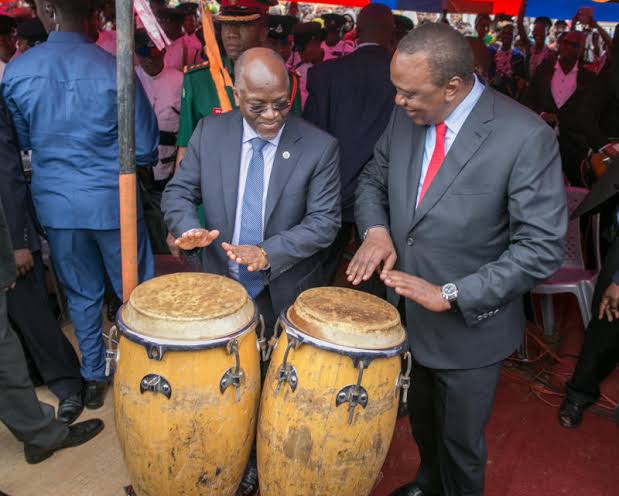 Speaking during his 10th Presidential Address on Covid-19, President Kenyatta told Kenyans not to think countries that are not releasing their coronavirus data are doing any better in handling the pandemic.

“Let’s not compare ourselves and say some places don’t have the virus. Why do we have it, and they don’t? Let me remind Kenyans, we live in a democracy where there is media freedom. As a state, we don’t have the power to hide anything. Whatever happens, we tell you.”

“There are others who have that power. But we are proud of the fact that we are a democracy and are able to tell each other the truth and face the reality instead of sweeping the truth under the carpet and have our citizens suffer quietly,” Uhuru said.

The move to exempt Tanzania whose President declared the country safe from Covid19 — a move which was aimed at keeping October General elections hopes at large. The list comes amid increasing diplomatic wars with Kenya.

On Tuesday, there were claims that the Kenyan delegation to President Benjamin Mkapa’s funeral was turned back mid-air by the Tanzanian authorities after President Uhuru’s comments. Claims that were denied by Ministry of Foreign Affairs.

Introducing guests at the funeral service in Uhuru Stadium, Kabudi said they had received information that the plane carrying Poghisio had been forced to turn mid-air because of bad weather.

“We were expected to have with us the special envoy representing President Uhuru Kenyatta, Senator Samuel Losuron Poghisio… but we have received information that his plane was forced to turn mid-air in Monduli. The information we have is that the plane is expected to land safely in Nairobi,” Kabudi said.

The CS said the list will be reviewed on a regular basis depending on the circumstances on the ground and after a comprehensive global mapping of the intensity of the disease.

According to the communiqué, all the passengers arriving in the country will be required to produce a PCR based Covid-19 certificate whose test should have been done 96 hours before travel.

“Let it be clear that those who will have a certificate of tests done before the stipulated 96 hrs will not be allowed to board in the first place. On arrival the passengers’ temperature should not exceed 37.5 degrees and not display any Covid-19 related signs,” Macharia said.

He said only such passengers will be exempted from quarantine. Macharia said passengers traveling out of the country will be required to abide by Covid-19 requirements of destination countries and before boarding, airline operators are under firm instructions to check compliance.

“Passengers arriving after curfew hours shall be allowed to proceed to their hotels but must have a valid passport and boarding pass,” he said.

The CS said drivers of such passengers will also be required to provide evidence that they came from the airport to pick them.

“For those departing after the curfew hours, they must have a valid boarding pass before they are allowed,” he said.

Macharia said air operators are required to provide guiding materials on the application of preventive measures.

“It should be noted that the aviation industry is an important sector both in terms of transmission and opening the economy. As we head towards the resumption of the international flights we have developed these protocols to ensure the safety of travelers,’ he said.

Macharia said through the resumption of the local flights, the industry had taken some time to learn what needs to be improved to ensure maximum readiness ahead of the August 1.

Domestic flight after approvals and protocols opened up on July 15 and so far so good.

Magufuli declared Tanzania Covid free defying WHO, opened its airport for any willing International flight bringing inn tourists. A move to collect revenues and get the country back on her feet. But this couldn’t qualify the intermediate neighbor to Kenya – make it into the list of low risk country to be allowed  to fly into Kenya.​