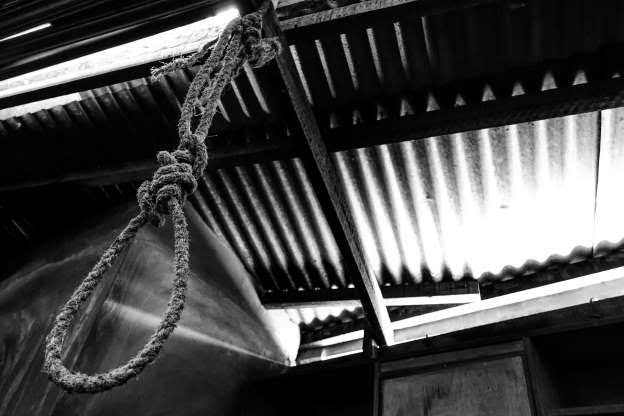 A 65-year-old man, who was allegedly diagnosed with cancer, has committed suicide. Tabathia Mugambi hanged himself in his house on Thursday evening at Kwa Mwaura village in Laikipia East Sub-county just hours after being screened
It was not immediately established what type of cancer the deceased was suffering from and at what stage.
The incident was reported by the deceased’s nephew Charles Maina who told police officers that he found his uncle hanging from his house’s roof.
Laikipia county police boss Maxwell Nyaema yesterday said the deceased left behind suicide note indicating that he did it on his own and that no one should be blamed for his demise
“The deceased left behind a suicide note that was found in his house about 200 metres from Kalalu trading centre. It stated that he did it on his own and his wife Teresia Kabariti Nyokabi should not be asked anything,” the commander said.
The incident occurs a few days after a 40-year-old woman from Naivasha committed suicide after being diagnosed with breast cancer.
Purity Muthoni hanged herself in her sister’s house in Kasarani Estate after travelling from Kenyatta National Hospital (KNH) where she had gone for treatment.
“She waited until the sister had gone to work before using a rope to commit suicide after telling her friends that she did not want to undergo the pain other cancer victims had gone,” a neighbor said.
The mother of two had been undergoing treatment in different hospitals before she was diagnosed with the disease.
Cancer is now the third leading cause of death, and the second among non-communicable diseases (NCDs), accounting for seven per cent of the overall mortality.
The number of people diagnosed with cancer has tripled in the last couple of years.
As many as 133 people are diagnosed with the disease every day as the incidence of the disease continues to grow in the country with about 90 Kenyans dying from cancer daily, with many having been diagnosed too late for treatment.
Kenyans recently took to social media with calls to declare cancer a national disaster.
Kenya Insights allows guest blogging, if you want to be published on Kenya’s most authoritative and accurate blog, have an expose, news, story angles, human interest stories, drop us an email on tips.kenyainsights@gmail.com or via Telegram
Related Content:  Is This Nairobi’s Most Expensive Ditch
Related Topics:
Up Next

Raila: The Parliament Should Apologize To Kenyans For Spending Taxpayers’ Money On Irrelevant US Trip