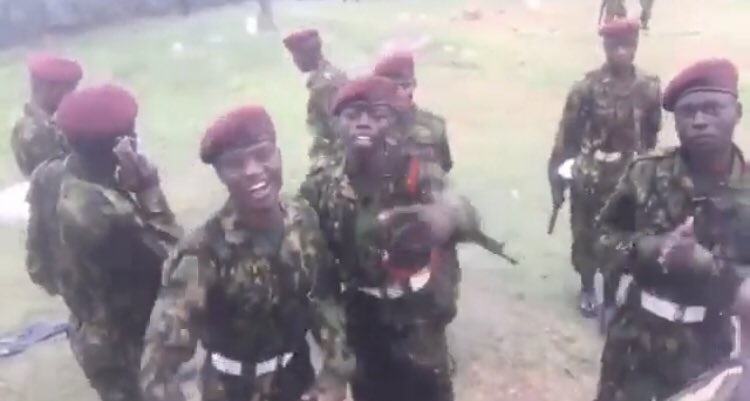 The National Police Service (NPS) has responded to a video of freshly passed out recruits from the General Service Unit (GSU) who vowed to brutally deal with the public.

Through an official statement on Wednesday, 8 December 2021, the agency heavily condemned the remarks made by the young servicemen in the viral clip that invited uproarious reactions from Kenyans.

The commission also cleared its name from the incident, insisting that the behaviour of the excited soldiers does not reflect the values of the service.

According to NPS, an internal review has been launched with a view of taking appropriate action on the same. 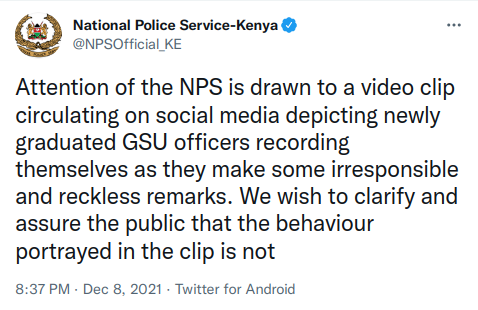 In the circulating footage, the fresh graduates say they are ready to take up their new roles, but Kenyans should be worried.

“We have arrived and just know that we are not coming to play. Don’t joke with,” one of the recruits said.

Alarmingly, some of them were holding their new guns.

The clip, which has been circulating since morning left many unimpressed.

At a time when the public is calling for reforms in the disciplined forces over misuse of firearms and power, the video was not received as a good gesture.

Some netizens called for firm disciplinary actions against the officers who filmed themselves threatening the public.

In case you haven’t watched it, check it out below.

Kenya Insights allows guest blogging, if you want to be published on Kenya’s most authoritative and accurate blog, have an expose, news TIPS, story angles, human interest stories, drop us an email on [email protected] or via Telegram
Related Content:  Video: Governor Joho Hanging Out With Supermodel Paris Hilton
Related Topics:
Up Next

How Former Vision 2030 CEO Mugo Kibati Might Have Colluded With Officials in Ministry of Energy In Lake Turkana Wind Power Project Tender Under Investigation.

South Sudanese Coffers Grinding To An Halt Courtesy Of A Tanzanian