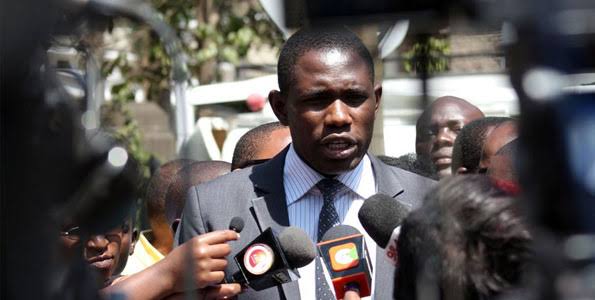 Dr. Oluga adressing press in a past event.

Dr. Ouma Oluga who’s the KMPDU Secretary General was elected on Monday 28/01/2019 as Co-Chairman of the Health Workers 4 All Coalition alongside Ms Amanda Banda from Wemos – Amsterdam.

Health Workers 4 All Coalition is a global initiative formed during the 71st World Health Assembly last year. The coalition advocates for universal access to skilled health workers everywhere in the world. The membership is drawn from International Council of Nurses, WMA, Public Service International, Wemos, Solthis, MSF, Ecumenical Pharmaceutical Network, Amref Health Africa amongst 29 other international and regional organizations in academia, civil society, unionism and professional associations working with or on Human Resources for Health.

Equally, KMPDU joins a 5 member Steering Committee for the Coalition.

The Co-Chairs are charged with strategic leadership of the coalition, increasing membership and lobbying governments to invest in HRH and guarantee everyone everywhere the right to access a skilled health worker.

Dr. Ouma Oluga grew up lacking basic healthcare because facilities and health workers were not available to attend to him and his family. When he graduated with a Degree in Medicine and Surgery (MBChB) from Moi University’s school of Medicine in 2010, Dr. Oluga decided to remain in his country to champion the rights of all health workers at a time doctors were migrating out of Kenya. He is deeply convicted that access to a well-trained and well-motivated health worker guarantees access to health as a human right.

Dr. Oluga has led the Kenya Medical Practitioners Pharmacists and Dentists Union (KMPDU) as the Secretary General and Chief Executive Officer for 4 years. He was the KMPDU Western Branch Secretary for two years prior. He is Kenya’s leading public healthcare advocate with a convincing following by majority Kenyan public and an admirable high approval from Kenyan health workers. He is a healthcare speaker in local and international conferences. He has spoken in many events including as a panelist during the 4th WHO Human Resources for Health Forum.

Dr. Oluga believes building local and international solidarity within the health workforce including community health workers where they exist is important to strengthening accountability mechanisms within health systems. He is creditedfor uniting Kenyan doctors, improving employment terms and influence of doctors and igniting health conversations.

Dr. Oluga was jailed in February 2017 for leading a 100 days nationwide doctors’ strike over a labour dispute between Doctors and the Kenya government. In the days prior to incarceration, he rallied doctors and the public to champion for more employment of health workers, health workers’ support and specialized training, improved terms of service for health workers and equipping of public health facilities. Hesuccessfully signed the first ever public health sector agreementsbetween KMPDU and the 47 devolved governments and also the National Government after a high level engagement with the President of the Republic of Kenya.

Due to his commitment, integrity and consistency, Dr. Oluga’ssphere of influence has expanded beyond Kenyan health workforce to include University Lecturers, Government Officers, Pilots Association, Civil Society Organizations and Youth Organizations. He is passionate about creation of employment opportunities for youth, decent work programs, transparency and stakeholder involvement in policy making processes.

Dr. Oluga attends to patients at the Kenyatta National Hospital as a frontline health worker. He is also a post-graduate medical student due for graduation with a Masters of Medicine in Internal Medicine from the University of Nairobi in 2019.

Kenya Insights allows guest blogging, if you want to be published on Kenya’s most authoritative and accurate blog, have an expose, news TIPS, story angles, human interest stories, drop us an email on [email protected] or via Telegram
Related Content:  Tom Cholmondeley Dies In Nairobi, His Last Days Were Haunting
Related Topics:
Up Next