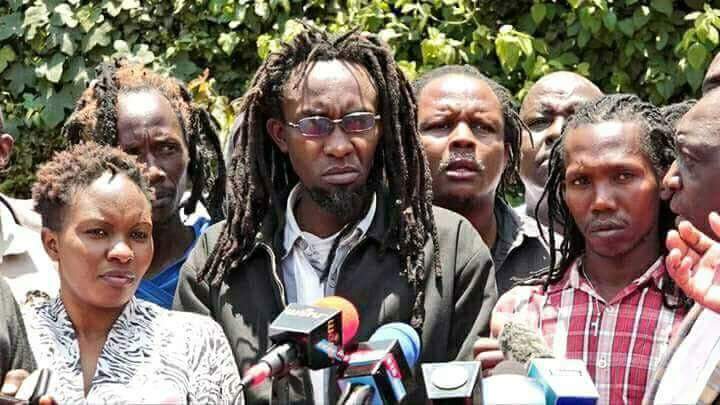 The mention of Mungiki sends shivers down any spine that knows how heartless this dreaded sect is. A criminal gang used in cold blood murders, robberies and all the criminal activities you can think of. Ross Kemp, One of the world’s most courageous investigative journalists flew down to Kenya to follow up on Mungiki, he admitted to this group is one of the most ruthless gangs in the world he has had encounters with.

During the 2008 PEV, 1200+ were killed majority by police and tribal cleansing in Naivasha. Members of the Mungiki Sect were suspected to have been used in the ritual killings that targeted members of communities that cites against Kibaki from the Kikuyu Community, Mungiki identifies themselves as the soldiers of the community. President Uhuru would be then indicted by the International Criminal Court in the Hague for financing this terror group that killed hundreds. Known for being extra brutal, their executions were marked with chopping off body parts.

I remember during the PEV period I was staying on Kisumu and women transported in police escort from Nairobi on fleeing after Mungiki attacks arrived terrified and relieved at the same time. One woman held the attention of many when she arrived with a human body wrapped in a green plastic bag, it was her husband’s who had been killed by the Mungiki and head chopped off. She has salvaged the head only to go and bury. We’ve heard of horror stories how chopped off heads were used to block roads, blunt objects used to forcefully circumcise perceived enemies. State protection was allegedly granted to the dreaded sect and they even had privileges of police uniform for camouflage. However, Uhuru would later be acquitted by the ICC and matter out to rest.

Kibaki’s government under Minister Michuki did a clean sweep on Mungiki when they became a menace and hundreds were killed without secrecy and apology. Sect leaders Maina Njenga, Ndwiga Waruinge and other surviving sect members would, later on, abandon the group and converted to the church. Whether this was strategical or genuine nobody really knows. However what we know is Mungiki exited the stage, went away from the limelight.

We’ve lived through the years without mention not fear of Mungiki, we’ve instead had struggling criminal gangs in the city like Gaza primarily made of malnourished, drugs consumed and brainwashed teenagers terrorize the residents. They’ve been equally met with police brutality and swept clean given unrelenting efforts by ‘Hessy’ a pseudo name for a killer cop who never forgive. 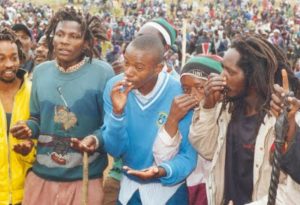 Back to the story of the day. While Kenya is preparing for fresh election after a stolen one was busted by the Supreme Court, different strategies are being used by different parties to capture attention and affection from their fanbase and basically whip up emotions. Days back supposed Nairobi Business Community held a press conference to protest against NASA planned anti-IEBC demos in the City to force incriminated officials out of office before the election. Having watched the seven-minute ‘Presser’ i made key observation that pointed at a sinister motive; instilling fear! The alleged businessmen mentioned business only once and the entire statement was political full with threats, threats and more threats.

It’s not easy to see this well-orchestrated scheme that’s why Kenya Insights is always here to give you that second look. If you’ve noticed, Jubilee has been on a legitimacy convincing spree a campaign aimed at affirming their supporters that Uhuru is fully in power even though in reality, the constitution limits his powers but that’s part of the strategy. Jubilee will sell their supporters ice cream of they were Eskimos and they’ll still take it.

The press conference starts with full GEMA rituals signaling who are targeted in the messaging, the GEMA community. They go ahead to give a statement that reads like a terror movie, they speak with so much authority you’d think it was Uhuru speaking but again this is not a brainer. The spokesman says “Uhuru will remain the president until he’s sworn in again” he goes ahead to repeat that line. Here the message is simple, kill the spirits of the opposition still holding hopes of Canaan. Well calculated speech delivery.

The statement goes to further state how they’ll protect the vote and Uhuru presidency. Jubilee supporters, by the way, are fully convinced the court stole their victory without paying attention to the court’s verdict that didn’t challenge the numbers Uhuru got but the conformity and noncompliance to the constitution by the IEBC but hey not any amount of sense can change an already made up mind so no need of going deeper.

If interest, however, is the clever use of dreadlocked, stone-faced, men in the presser. If you noticed, they’re strategically placed in the center for full camera capture and at no point are they captured smiling, they wore that no-nonsense face the end. The Hidden message in this thing is Mungiki factor. See, the sect initially was characterized with long untidy dreadlocks and snorting some drug, if you look keenly you’ll notice in the background they’re snorting or pretending to be. 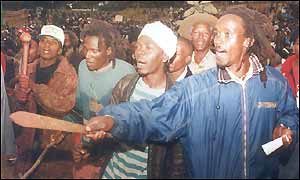 To complement Uhuru’s legitimacy and Jubilee power control I think whoever crafted this wanted to assure the supporters particularly the GEMA that their ‘soldiers’ are fully on board to supplement the State power just in case. But this thing is ridiculous staging because Mungiki members dumped the dreadlocks to camouflage and in fact, most of them are in suits and in big offices nowadays.

In my own thoughts, I think there’s a well laid out plan to cause voter apathy especially in the opposition areas including voter displacement. Those informal sectors will buy into this and are often most targeted in the fear-mongering strategies. Remember in the run-up to 8/8 there was a plastic war atmosphere created that never was. Jubilee is strategically putting NASA on the receiving end, keeping them agitated and involved in rebuttals as Jubilee is busy campaigning. You’ll see unrealistic legislations being pushed that will have NASA complaining, meanwhile, Jubilee will be campaigning.

I highly suspect that towards the 26th election date Jubilee will give in and allow NASA’s irreducible minimums and by then they’d have fully configured the system to beat NASA before the polling station opens. Cambridge Analytica, the company advising Kenyatta specializes on manipulating gullible minds and operates best in a divided society, Kenya is a fertile ground given sharp ethnic divisions that have made their work even easier. Fear is their trading commodity and that’s why you’ll notice Every time we move closer to the election date, fear of violence increases. It is not surprising to the watchful eyes. This time Mungiki seems to be an asset in their push. Mungiki narrative is brought back to whip up emotions, fear to opposition and ‘confidence’ to Jubilee. If it was genuine, you wouldn’t see them in camera but hit unexpectedly like in 2008. This is all but a strategy to create a notion. Cambridge are experts at manufacturing hot air but again this is Kenya.

Jubilee like any other contender is in this election to win and if they went wrong the last time, they can’t afford to lose twice and that’s why they’ll they’ll everything possible including dumping the constitution to install a totalitarian government. NASA an opponent can’t sit back as a crybaby but study their opponents, secretly plan their attack strategy and stop Jubilee. What took down the communists in Divided Germany was the perception and realization by common folk that the communists were not as powerful as they projected themselves. Jubilee projects itself as insurmountable to experience defeat at the ballot. In truth, they are stiffly scared of a transparent process, in truth they neither have numbers nor have the backing of Kenyans. It’s time the common folk knows this, in the villages and hamlets.

And lemme be extravagant with the truth, if Jubilee was confident of a clean sweep, a clean win in a clean election and had the imaginary numbers I promise you wouldn’t be seeing the twerking going around. It would be zero side shows, combined efforts to ensure flawless electoral process but since lies are more convincing they’ve resorted to clutching on every sideshow available. We all know who can’t win in a clean fair election and who can win but just don’t want to say it. Anyway, if this didn’t open your eyes one lid, you can go back to consuming brainwashing lies. I’m out until the next.

In The Hands Of Militia Police, Blood Boiling Accounts Of Brutalized UoN Students And Lecturers