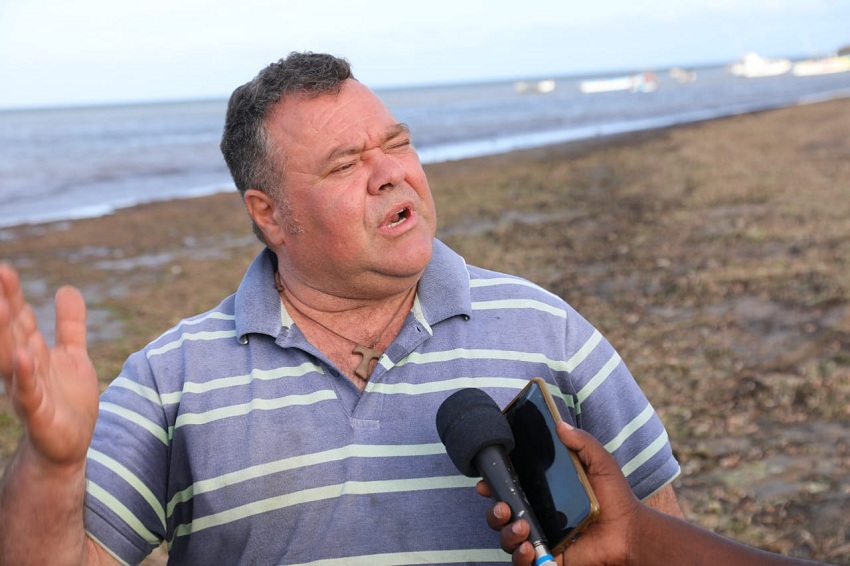 Basta Alessandro said his ships are normally inspected and use the nets which are required by the fisheries regulations.

An Italian investor whose ship was nabbed for allegedly doing illegal fishing in Kipini area of Tana River County has dismissed claims that he does not follow the laws of fishing.

Last week, two dolphins and a turtle were found dead along the shores of the Indian Ocean in what is believed to be a result of trawlers fishing in the area.

Basta Alessandro the owner of Itika limited whose ship MV Roberto was nabbed fishing in Kipini waters of the Indian Ocean said his trawler was doing fishing legally as per the license which was issued by the fisheries department.

Speaking in Malindi, Sandro said he owns two ships that do trawling activities in the Indian ocean three of which were licensed to do fishing from 3.2 miles adding that another company also has two ships which do fishing both in the shallow and deep sea.

He said the forces behind the arrest of his vessel crew members were people pout to seek attention and funding from international wildlife organizations.

“I have been doing fishing in Kenya for the last 20 years I work with the community and you can hear from them if I do something legal or illegal, I do fish legally and sell fish to locals at a very cheap price,” he said.

The Italian said there is no conflict with the fishermen and his catch comprise of small fish which are sold in Malindi and Mombasa at a very cheap price from Sh. 130 per kilo.

He said his ships are normally inspected and use the nets which are required by the fisheries regulations.

Sandro said last week his ship was ambushed by a group of security personnel from KWS with guns by officials who had no masks which were risky to the crew members who have been on the ship for 30 days.

“This is just a plot to protest so as to get funding from organizations in America, Germany and other international donors, but the truth is we are very keen on conservation,’’ he said.

He said his captain was arrested and taken to the police station but revealed that there was no evidence to prove that he was doing illegal fishing.

“All evidence is fake my lawyer made sure they go to the relevant departments and everything was found to be alright,’’ he said.

He said each ship has 80 crew members adding that his work feeds over 3000 families through the fish caught by the trawlers.

Since the incident happened, he said he no longer goes fishing in Kipini but as there are a lot of fish in Malindi fishing area.

However, he revealed that he has incurred losses amounting to over Sh 40 million and vowed to take legal action against those who led to the arrest.

Community members interviewed said the trawlers had no problem and help in supply of fish to local fishmongers at a very cheap price.

Abdul Hamza one of the fish dealers in Malindi said the trawlers the ships fish from 3.2 miles that are recommended and do not have any negative impact.

On the issue of Kipini he said the locals are lazy that’s why they are not happy with the efforts of the Italian who does fishing,

He dismissed claims that the ships were destroying turtles saying turtles live in corals where they do not fish.

“I would urge the government to investigate this issue and find out the real problem instead of just following here say,’’ he said.

He said there are five ships among them four do fishing in shallow waters and the other one goes fishing in the deep sea.

Ali Hamza a resident of Malindi also said there was no problem with the trawlers because most of the fish are sold locally to fishmongers.

Kipini residents last week asked the government t0o ban trawlers as they were harmful to marine life such as sea turtles, dolphins, and other endangered species like the guitarfish.