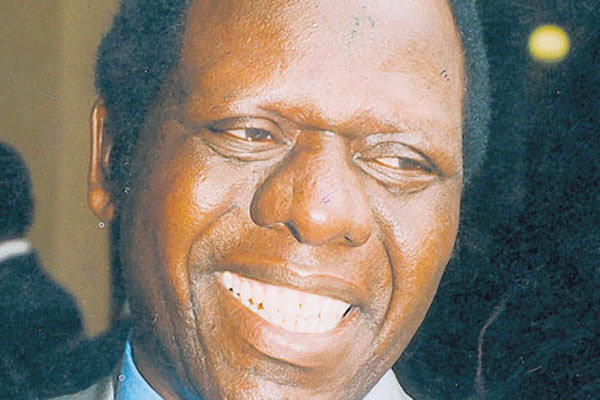 When Kijana Wamalwa passed away in 2003, the former VP hadn’t made a will and this would lead to a lengthened battles within the family over his estate. Fifteen years after Wamalwa’s death, his pension has never been processed. An injunction was issued after a suit by Wamalwa’s eldest daughter, Alice Muthoni Wamalwa.

When the VP left, he left a heap of tussles to the family since he didn’t have a will. Today, the family is in deep legal battle more so on his Karen property which we gather from family sources that it’s currently valued at Sh550M. 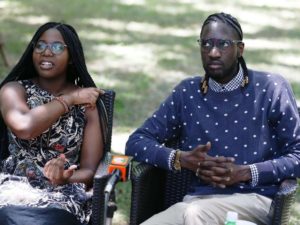 The family is now divided into two battling group; Michelle and Derek who’re both Yvonne Wamalwa’s daughter are on one side while Muthoni and her other siblings on the other.

Derek who in the interview called out his uncle Eugene Wamalwa is not the late VP’s biological son but son to Luke Mboya who comes from the prominent Tom Mboya family. Luke And Yvonne had a son together before she married Wamalwa in a lavish wedding in 2003.

Wamalwa left an estate but it is the Karen property that is in contention, according to court papers, Wamalwa’s late widow Yvonne Nambia Wamalwa argued that the Karen home was not part of his estate. 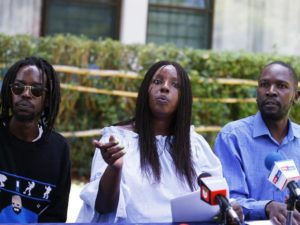 Alice Muthoni and her siblings.

However, the Karen property is listed under Wamalwa’s estate whose co-administrators after Wamalwa’s death remained Yvonne and Alice Muthoni, the eldest daughter who’s currently the administrator since Yvonne died.

Now, problem arises in the control of property. When Wamalwa was still alive, he lived with all his kids in the same house, when he died and before Yvonne travelled to Australia, the other kids were hounded out of the Karen home as Yvonne insisted the property was hers.

When Yvonne Wamalwa passed away in Nanyuki, she had in her will that Stephanie, the sister who was taking care of her while sick should look after her kids; Michelle and Derek. That would not be the case, Yvonne’s other sister Jacqueline Nangami came and took them instead. 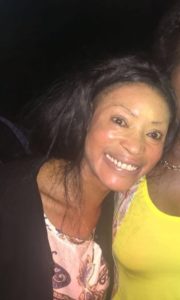 Jacquline was previously married to the Omamo’s family and had two kids before they separated and she married an Australian. When Yvonne Wamalwa was appointed Deputy Ambassador in Australia, she moved with her kids and her sister.

Now, on coming back from Australia for her sister’s funeral, Jackie assumed the role of the mother to the oprhans. During Yvonne’s funeral, DP Ruto promised to take care of all Michelle’s school expenses and promised to give Jackie a job in Australian embassy so she could be able to support the two kids left.

Since coming for her sister’s funeral, Jackie has never gone back to Australia to her husband, instead, she moved in to Wamalwa’s Karen home together with her two kids and Yvonne’s. At the same home, Yvonne’s mother lives.

The other wing of Wamalwa’s family consisting of Michelle and Derek and most probably in conspiracy with family members they’re in alliance with, moved to court to disqualify Alice Muthoni from being the co-administrator of the estate and instead replace him with Derek.

A family source talking to Kenya Insights said this is part of larger scheme to sell the Karen home and they need full control since Muthoni has blocked this move. The tussle has the larger Kijana Wamalwa family split right in the middle on one hand is Wamalwa’s late widow Yvonne Wamalwa’s children Michelle Nafuna Wamalwa and her brother Derek Luke Mboya. Orphaned, given the death of both parents the two are battling for their lives.

On the opposite side is their step brothers and sister led by Jabali Wamalwa, Alice Muthoni Wamalwa, William Wamalwa Senior and William Wamalwa Junior. The four step children claim the two Wamalwa orphans from Yvonne Wamalwa’s house want to grab everything Wamalwa left for all of them.

“It is a question of fairness whether one of the beneficiaries can get three quarters of the estate to the disadvantage of the four who are left to share one quarter of the property,” said Muthoni.

Orphans from Yvonne’s house apparently want the other four to inherit the other property in Kitale and this is where the heat is since Karen house has higher value.

Kenya Insights learns that Michelle wasn’t really pulled out of Australian School as she had alleged during her interview, when her mother was recalled from Australia, they both cane back and has been attending GEMS Cambridge International which the government was fully paying for. Jackie, her aunt, pulled Michelle out of school as she had been promised a job in Australia by Ruto and she was to travel with Michelle. 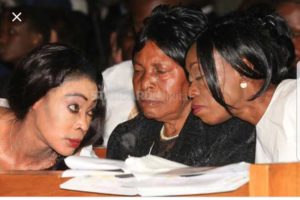 Yvonne’s sister Jackie , mother and Stephanie during her funeral service.

For an Year now, the young lady has been out of school and since the aunt’s promised job is yet to materialize, she’s been forced to stay at home. We’re told more often they turn to the CS Wamalwa who send them help, this is contradicting to the picture the two painted of him during the presser. “It’s an open secret in the family that Eugene has a softer heart for Michelle, hell not stop at anything.”

The CS refused to comment on the recent developments. Some family members are pointing fingers at Jackie for poisoning her sister’s kids to turn against their other siblings causing a wide rift. A plan that’s suspected is that of selling the Karen property and vanishing with the money probably to start a new life in Australia.

A cloud of suspicion also engulfed the Yvonne’s memorial when her mother held Luke Mboya’s hand calling him her real son-in-law. Luke who’s Derek’s biological father, was seen driving away with Michelle and Derek immediately after the presser throwing many into guessing what is really conspiring.

The matter on the Wamalwa estate is up for hearing on February 4, 2019. This would square how this property would be shared in fairness.