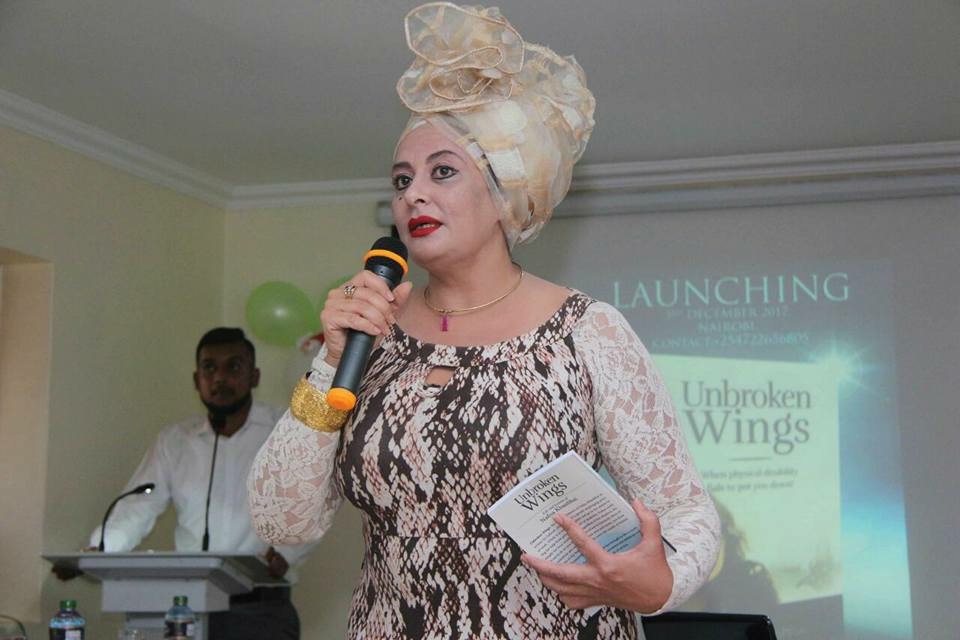 Nazlin Umar.The country is currently under cleansing as authorities go on the extreme in a crackdown on counterfeit and contraband goods. Sugar has been a key target with several tones of sugar and stores raided and confiscated. Preliminary tests have shown lethal chemicals like mercury,lead and copper are present in the smuggled sugar that is repackaged and sold to unsuspecting consumers.

Many concerns have been raised on the genuineness of the crackdown as it seems to only target the small people in the supply web as the main faces behind the importation of the contraband sugar remain a mystery. As the debate rages, one person has risen beyond the bar, Nazlin Umar a controversial presidential candidate who again made news recently as Aden Duale’s girlfriend, has implicated the Deputy President Ruto into the poisonous sugar debate. She says the DP is the mastermind.

DP William Samoei Ruto is the mastermind and main beneficiary behind the poison sugar. And his right hand minions. There I have said what other leaders fear to say. Arrest DP Ruto and his right hand loud mouths. Stop playing side shows and going for those acting in Ruto’s proxy.

The media, DCI, DPP, Matiangi keep on reporting of some big politicians without naming names, Matiangi claimed he was being threatened, who is threatening the CS? So the truth will remain hidden because people fear for themselves, while we are being looted dry and poisoned? Name the big names.

Yes, Mr. President Uhuru Kenyatta I am naming the believed Killer sugar Baron as he cannot continue to blackmail you, investigation officers and this nation. Let me do the dirty job as a servant if my nation: if you haven’t listened to me these last few days.

Who is the chief despot of the killer poison sugar? Who is plotting the mass food terrorism in a bid to tarnish his bosses legacy? Who has acted in subterfuge to the nation? Who is the enemy of the people?? One William Samoei Ruto?

Ruto is also the head and master mind of the maize and electric company scandals, nssf, pipeline too. We have lost more than a trillion of our hard earned taxes to his greedy thiefing hands.

Uhuru needs no other laws, the constitution as I have repeated time and again fully empowers Uhuru to fire this malicious evil thiefing despot ann appoint another DP. The DP’s seat is as irrelevant in the constitution as the deputy governors of counties. Throw the despot out like a rag.

Ruto is interfereing with the investigations, making threats not to be exposed else he will burn this nation, as he was the one whose proxy companies imported the sugar and who ordered armed police escort of the poisoned sugar to Nairobi and Nakuru all the way to Kabras….etc. The Rai’s are merely his minions. (More about this later. Yes Ruto made Pan paper fail intentionally then sold off the public entity to the Rai family at throw away price of under 1B). He is a hidden partner. The Rai’s should also be audited and investigated.

The DCI and DPP must not insulate him and his henchmen, even if it be him and the majority leader Aden Duale Aden Duale who brought this wrath upon Kenyans. They can loot all they want but no, no one should be spared in heading or aiding and abetting poisoning us with mercury and copper. Those who knew this and remained silent are also killers.

I am already target and expect to be finished off like Jacob Juma, but I am ready to meet my maker if this is my fate.

Ruto is no longing acting under his Boss. He has rebelled against his president Uhuru, which is a crime by treason. He is abusing state machinery, abusing office and public funds to campaign for himself 2022. He is no longer working. This is an electoral crime and a violation of his oath of office.

William Ruto knows he is about to go down and is not only looting left right and center but is in a fierce campaign to entrench himself and set the base for civil war and tribal genocide and ethnic cleansing as he did pev 07/08 should Uhuru dare expose him, suspend or fire him. But he has to. He has no choice.

The fallout I prophetestisized (new word I created since i am NO prophet) over 2 years ago when they were as comfy as two bugs in a rug has also come to pass.

It isn’t the easiest thing being president. Uhuru has no legacy left unless he swallows this bitter pill. He must cut off this cancerous arm.

I demand public inquiry and audits not those conducted lopsidedly in secrecy. Kenyan will not accept any scapegoats and sacred cows. Investigate his wife #Rachel and kids too. They are all beneficiaries.

I also demand state security for my family and I as the chief opposition, exposer and whistle blower in Kenya. I have a lot more unsaid.

Uhuru now needs to remove his gloves, wear his army boots, brave up and kick some ass! We are ready to face the consequences today than give the black mamba more time to sink his poisonous fangs even deeper into the nation and take us back to pev violence.

I repeat. Iam already target, under 25/7 surveillance and monitoring and expect to be finished off like Jacob Juma and Mesheck Yebei too, i have suffered gross unheard political persecution and oppression but I am ready to meet my maker if this is my fate.

ALLAHUACKBAR! I can no longer allow our beloved country to go to ruin under the hands of a few vile malicious evil despots. We are the hero’s we have been waiting for. Kama ime kuwa mbaya, iwe mbaya! I stand for public interest.

I and my family are already the victims of gross unheard of targeted, systematic political persecution and may be killed for this but I remain black mambas most fierce critic, the strongest independent anti-corruption tzar and the most ardent defender of the people. Allah be witness.

The gloves are off. I’m ready for anything. Kila mtu abebe msalaba wake.

Truth as only said by Nazlin Umar Rajput.

NB:
I have posted this all over major fb groups. The world must know. I said it earlier, I was waiting for Ramadhaan to end to take this cold war and exposés out to the universe if so be it.

Kenya Insights allows guest blogging, if you want to be published on Kenya’s most authoritative and accurate blog, have an expose, news TIPS, story angles, human interest stories, drop us an email on [email protected] or via Telegram
Related Content:  OLAMBO: The gods Have Conspired Against EACC Chairman Kinisu, But He Has an Option
Related Topics:
Up Next