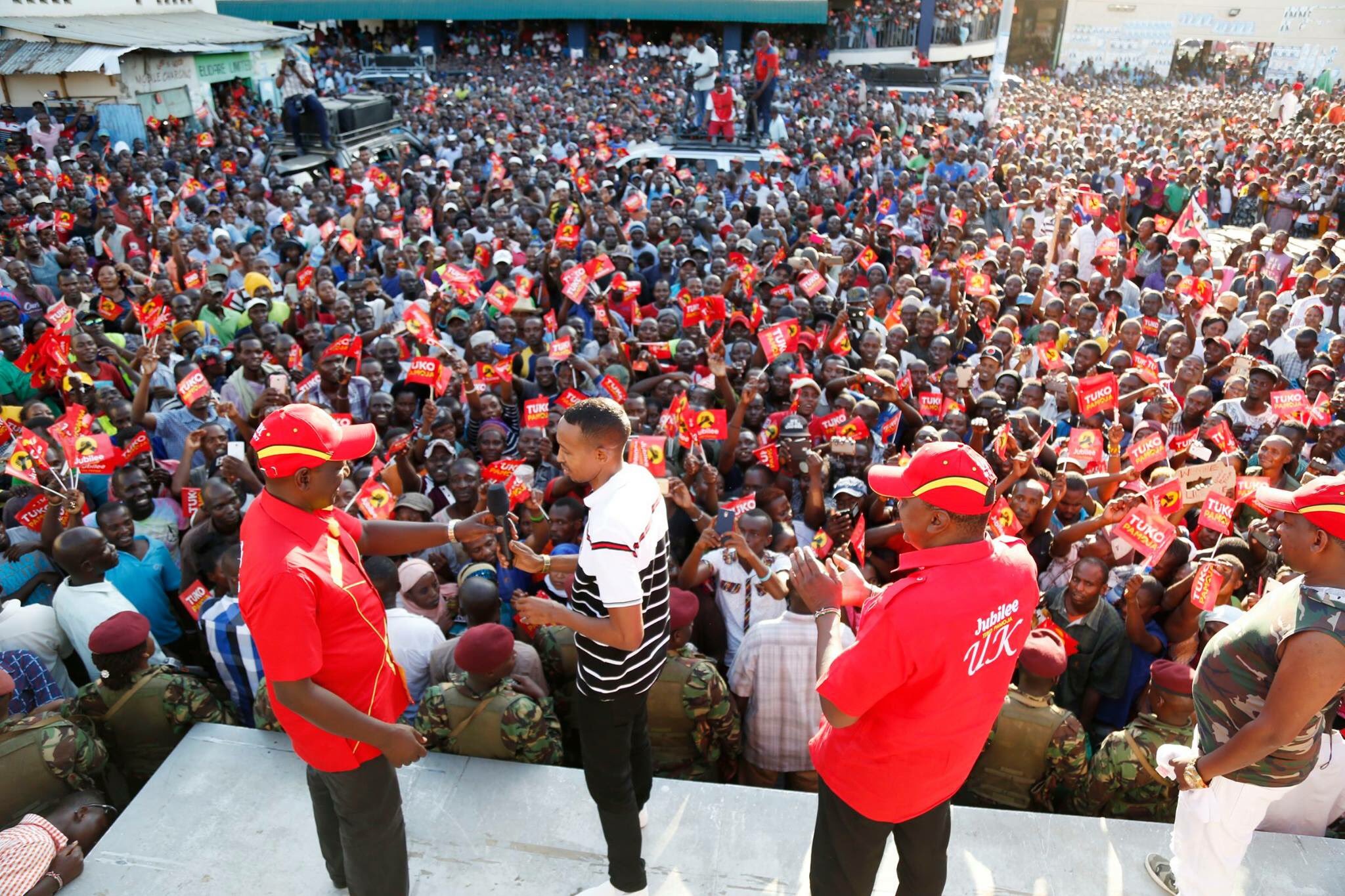 The interwebs streets are currently flamed up with mainstream media abuzz with the news that Nyali MP and Jicho Pevu famed Mohammed Ali a harsh critic of Jubilee administration has defected to the same team he’s been fighting. This is coming following an appearance he made during president Uhuru’s campaign in Mombasa.

Jubilee campaign pitched camp in his constituency. Moha has defended his appearance at the rally saying he was merely playing a hospitable host to the president. Moha is being castigated especially by opposition supporters who now think he’s a sellout. Below is a statement the Mp has issued in his defense.

Today, President Uhuru Kenyatta visited my constituency as part of the Jubilee Party’s electoral campaign program. Given the political tension in the country right now, my decision to attend his rally as MP for Nyali was a difficult one to make, but I chose to attend it, and give the office of the President its due respect. Also, young in the field of politics as I may be, I chose to respect the event and attend because I wanted to deliver a message. I chose to attend precisely because of the point we are at in this country today.

Both political formations, NASA and JUBILEE have, through their actions, removed any possibility for negotiation on the best way forward for our country. We are close to the edge, and the ramping up of temperatures makes our collective descent off the cliff seem inevitable. It is not. It is not because even in our political competition, what should be at the heart of us is the welfare of our people. In 2007 I reported on these very streets of Nyali, after a political contest much like this one. I saw violence that never want to be repeated. So I welcomed the President to my constituency to remind him of that, just as I will remind the Former Prime Minister should I get the opportunity to do so. The lives of our people, indeed, the soul of this country, is of far greater importance that whatever enmity the two men, and their parties seem to have for one another.

I hope that perhaps, in welcoming a man, and a party whose policies I personally disagree with, shows the public that politics is important, but that their lives are more important. As an Independent Member of Parliament, my responsibility is FIRST and FOREMOST to the people of Nyali, who elected me. The people of this constituency need jobs, better healthcare and education for their children, and a hope for the future. As I did on the campaign trail, I say that I will work with all people whose core interest is to develop Nyali and make this constituency the envy of this county.

In my own opinion, Moha must have misread the political moods and writings to make such an appearance that was bound to be read with a political eye. Coming barely hours after Hassan Omar yet another Jubilee critic having defected officially to Jubilee, his appearance was bound to blow up. In his well-calculated speech, Mohammed Ali steered off Jubilee politics instead presented plight of constituents.

The media quickly picked up the story and misinterpreted it for convenience and to suit a narrative that Jubilee is gaining more relevance and winning more leaders. It is equally not surprising that Jubilee bloggers starting with Itumbi went on a rampage posting few captured moments to advance this narrative.

I’ve personally talked to the MP and refuted the media reports that he has defected and that his stand for justice and against Jubilee injustices stands. Now, my issue is, Moha underrated Jubilee’s might I’m destruction. He was probably convinced to just make an appearance and being an independent candidate it could be inconsequential not knowing what was awaiting him. They waited for the moments and captured the pictures that will haunt Moha a junior I the murky political world a long time to shake off. Perception is everything in politics and that’s what Jubilee baited Moha with.

The timing was bad, Jubilee is his presumed enemies so it was obviously going to be read as having gone to bed with enemies. No amount of explanation will easily shake off this perception he was baited and ran into of being a sellout. But I’ll not play so much of an advocate as he knows the entire truth for me I simply interpret the media falsehoods. As an independent candidate should Mohammed Ali defect to any party then it means his election will be automatically canceled and will have to seek a fresh mandate from Nyali. As for what happened today, good luck shaking off this, it’s going to be a long bumpy ride, your political enemies will capitalize on this and hang you in public daily.

Related Content:  Akon Confirms His New City In Senegal, 'Akon City' Is A Reality
Kenya Insights allows guest blogging, if you want to be published on Kenya’s most authoritative and accurate blog, have an expose, news TIPS, story angles, human interest stories, drop us an email on [email protected] or via Telegram
Related Topics:
Up Next