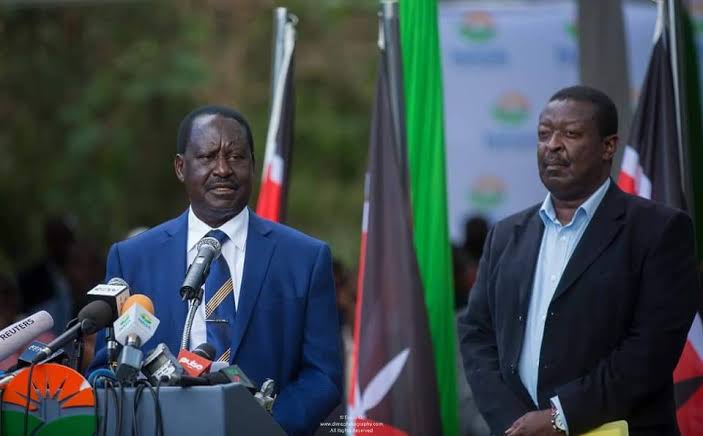 Musalia says the former Prime Minister  March 9, 2018 Handshake was necessitated after Western powers pushed a visa cancellation drive against key members of the National Super Alliance (Nasa) and their families.

In his autobiography titled Musalia Mudavadi: Soaring Above The Storms of Passion, the unsuccessful 2013 presidential candidate says that there was no unanimity in the move by Nasa.

The handshake was also highly secretely guarded, Musalia who had met with Raila multiple times the week before the handshake was announced says he did not mention anything. The handshake then came as a suprise to him. “Unbeknown to the rest of us, Raila had entered into a conversation with Uhuru… There was not even the slightest hint that anything of this kind could be going on. The Handshake on Friday, 9, March (2018) between the two gentlemen, therefore, came as a total surprise to me.” He writes.

In the 418-page book, Musalia points out that Raila  mentioned that he had received letters of cancellation of his visas by various foreign missions to Kenya and that led to him caving in and agreeing to meet up and mend fences with his political rival.

Kenya Insights allows guest blogging, if you want to be published on Kenya’s most authoritative and accurate blog, have an expose, news, story angles, human interest stories, drop us an email on tips.kenyainsights@gmail.com or via Telegram
Related Content:  How Dennis Waweru Cooked Himself Out Of Nairobi Gubernatorial Race and Now Risks Losing Dagoretti Seat
Related Topics:
Up Next

Dr. Gitahi: Brace Yourselves, It Could Take Upto 18 Months For Kenya To Recover From Coronavirus