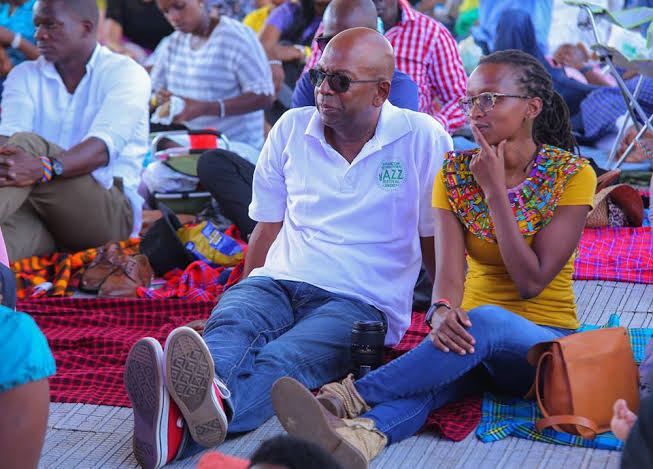 Safaricom CEO has succumbed to cancer and the family has announced that his burial will be held tomorrow in a private ceremony. It appears Bob Collymore was prepared for his journey all along and had everything written down.

Heres a prolific man whom despite having been the most criticized CEO in the country, has been eulogized as a great person, leaving behind a family of four, Collymore has been mourned by many people across the divide.

Collymore suffering from acute leukemia, had to take time off from his position at the leading teleco to seek treatment abroad. This was the first time his personal health struggles came to the surface.

In an interview with Steve Biko, Bob came out personal in what might just be the only available personal revelations he left us with. Below is an excerpt from Bob’s interview with Bob where he opened up about his health, family and subtly his death. 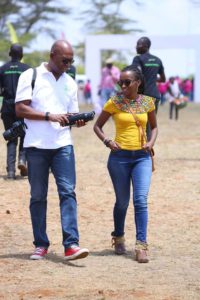 The Late Safaricom CEO and Founder of Safaricom Jazz, Bob Collymore with his wife Wambui Kamiru.

Having just turned 60 not too long ago, what was been your greatest revelation of the 50s?

I think I had a lot more self realisation in my 50s. In my 40s I was still hunting around. I left UK for Japan and then to South Africa where I started to gain a defined sense of purpose, began to understand there is privilege in working in an environment you can make a difference in.

The other significant thing that happened in my 50s is that I adopted my daughter — we have a 50-year difference between us. That was a great thing.

My 50s is also when I was diagnosed with cancer and to think of life and wonder if things will work out; will I get back to Nairobi or is this it; and when I look back at my life how do I feel about that.

That’s a good question. I know purpose is to help as many people as I can to do the right thing. I have talked about cancer children at KNH on palliative care, children who know they will die and not dying in the best circumstances.

My question is; can I sway people or the government to do the right thing for them? Can I make business deals that will look at the climate change or impact it in a good way? Can I do more to encourage great transparency, reduce fraud and corruption?

Have you always been clear what you wanted? Was this ever part of the big idea?

I was always clear that I wanted a bigger car and a bigger house, like most people, really. [Laughs].

I wanted these things because they show status but at some point, I must have been 45-years, these things changed. I started asking what do I want to do and why?

I was in Japan then with my family and my son had just finished school and I thought, ‘what is important to me now?’ and at that time it was my son’s happiness. But was the car I was driving then, a Jaguar XKR Sports, going to guarantee his happiness?

I started to think about the society he was living in and the future he was going to occupy and my role in making it better. That was my turning point. Life was never going to be about the size of car I drove.

Did you ever cry when you were in hospital?

I think I did. Once or twice, in the early days. There was a period of uncertainty, when I didn’t know exactly if I had cancer or not but everything was indicative that perhaps I had it.

And I cried in response to the messages. It was a death moving messages, even the sea was moved. Everybody at Safaricom and just the general Kenyan public, strangers, acquaintances, friends, just wishing you well.

It’s tough. I remember many years ago, Wambui asked me the same question. I said I don’t and that’s why I only have one friend, unfortunately that friend died. She said wow.

But over the eight years of being here, we’ve seen more and more people emerge as genuine friends or people who genuinely care. So I have a very small circle of good friends, and they come from different kind of backgrounds. It’s tough for people like me because we actually want people to care more.

So who now tells the emperor when he’s naked?

Wambui does. Also, him [points at Urbanus Musinga, his Executive Assistant]. He is likely to tell me when I’m doing stupid things…

What’s the most stupid thing you’ve done in nine years as CEO?

(Chuckles) Why are you asking this question? Because I have to go through so many things that I have done to pick the most stupid thing I’ve done.

They’re many. My mind is in paradise to think about it now. [Pause] I think some bad HR decisions — the firing was more about the timing rather than if I should have done it or not.

Has this experience of battling cancer changed your perception of mortality?

[Pause] Death is inevitable and I have made the decision not to cling on the thought of it because it will eventually come; I just do not know when.

I have chosen to focus on the things that are more important to me. Now I know it’s kind of impossible for somebody to live for 200 years.

[Chuckles]. But something very important is that when you have cancer the idea of death is near, and so it doesn’t surprise unlike you who is healthy, but death could be coming in the next minute or tomorrow morning.

Has it changed how you do business?

To some extent it has. It has allowed me to let more people manage me. It’s made us focus on the things that are important because not everything is important, not all arguments are important.

Because music is a big thing in your life, if you’re to pick a song that captures the moment you were fighting cancer, what song would that be?

That’s a tough question. There’s a difference between me and my wife, she listens to the words, I listen to the music. So for me it’s a bit more abstract, it’s about the sound, not the words. So I don’t think I can pick a song that says, that’s where I was.

But during this time I did listen to a lot of “Grandma’s Hands,” by Gregory Porter and Ben LOncle. Grandma’s Hands actually is a nice song because it does take me back a lot because my grandmother had such a huge impact in my life. Probably the single most important person in my life.

You have been married once before…

Three times! [Laughter in the room] But divorced twice.

How do you do it three times? What is your reason for coming back over and over, is it love? Faith? What is it?

Each time it’s got better. Each time the match has been better. There are stuff I couldn’t have done better for sure.

And is blame which I have to take. Hopefully I have learnt from some of it. What keeps me coming back? [Pause] I think I never set out to remarry, I think I just meet someone who, we lived together for a while before we got married, so someone who you think I can spend the rest of my life with because we care for each other.

The first marriage was a mistake for sure. I was too young — in my 20s. The second one was not a mistake, what was a mistake was how we conducted it.

Now we’re actually very good friends with Clare because we have children in common and she has been very very supportive because she’s gone through cancer herself in the UK and she kind of gives me tips on how to deal with some of the challenges that I face with the chemicals they’re about to pump into me. She frequently reached out to Wambui and say why don’t you come down for the weekend?

When you were in that room, alone, with your thoughts, did you discover anything about yourself?

Yes, actually I did. [Pause] I don’t know if I should say it…I should in the spirit of honesty. [Pause] I had hundreds and hundreds of well-wishers sending me messages to get well soon, some who are strangers, business rivals, acquaintances and all and I stopped and asked myself, “would I have done the same thing?” [Long pause] The answer is no. That realisation didn’t fill me with pride, knowing that I was not the nice person I thought I was.

Does it get easier – marriage – when you keep getting married?

I think it does get easier providing you’re mature enough to learn lessons from the last time round. If you’re not mature then you’ll keep repeating the same mistakes.

Do you think as you grow older you become a better husband?

I think you should become, I don’t think you always do. There are some old guys who don’t do anything constructive.

Because you have a blended family, how do you make sure that everybody else is getting along?

That’s a trickier question to answer because it is complex. There are lots and lots of people involved. So my side, I’m really lucky in the sense that my ex-wife has met a guy who is fantastic.

They’re getting married again next year. He’s a good man.

He would go to such extent just to make sure that I can see my daughter. When I was sick he would drive her and then leave her for the Saturday.