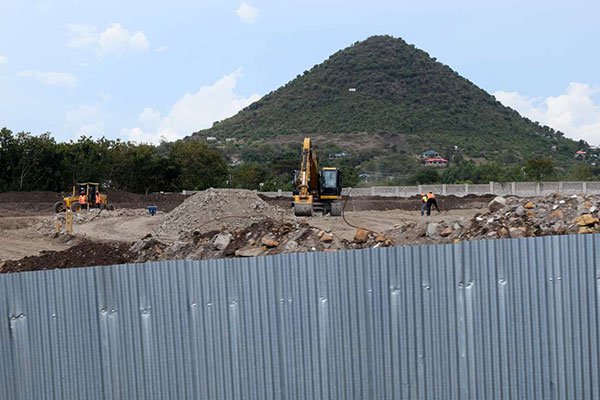 In 2014, HomaBay County set aside a budget of sh200 million to construct a much-hyped ultra-modern 9,000-capacity Homa Bay Stadium that, was supposed to be build from scratch. 5 years ago, After a groundbreaking ceremony, the only thing to show for the project a dormant dirt-stinging, iron sheet fenced area filled with craters created by excavation machines.

According to the Homa Bay County’s executive for sports, Fredrick Odero, in the financial year 2014-2015 the devolved unit set aside Sh200m for the project that would occupy about 4.5 acres. Another Sh160m was allocated for the stadium construction this financial year.

The retired Auditor General Edward Ouko in January released a report revealing that one of the contractors was paid despite not completing work contracted to do. The contractor, Manjano Enterprises Limited, was to build a perimeter wall and related works for the stadium at a cost of Sh28million.

However, the firm was paid Sh5million but failed to complete the work, and in fact, they moved away from the site.

“The contractor had erected columns (pillars) covering half of the stadium’s perimeter only but thereafter abandoned the site,” indicated the report.

The construction works resumed on July 5 this year with authorities in the region saying that the project will now be finalized in the next one and a half years.

“We hope that work on this facility that resumed about two months ago and is estimated to take one and half years to complete will proceed well amid the teething problems raised by National Environment Management Authority (Nema). We are determined to ensure that work on this project is not interfered with or delayed,” said Odero.

Our background checks revealed that the project had been initially stopped by NEMA for failing to meet the set standards and comply with the regulations set by the environment management agency.

The main contractor, Six-Eleven Energy Limited, has only carried out site clearance, construction of office store and demolition of the existing structures. Even the iron sheet perimeter wall is half complete.

According to the county officials, the stadium will be oval-shaped with two wings – north and south. Each wing has a 2,000 capacity stand alongside a VIP pavilion with a capacity of 3,000, terrace with 2,000 people. The playing surface was to have an artificial carpet.

Other features are an eight lanes tartan track, modern changing rooms and underground offices. However, no artistic impression or the project blueprint of the sports structure is available for perusal raising a red flag.

In their defense, the Homa Bay county government has however announced that it will only concentrate on the main stadium before considering constructing the other facilities. Odero hinted that they will seek financial help from the private sector and the national government after completion of phase one which will involve putting up of the main pavilion and the artificial turf.

“We will finalize phase one and later use it as a display to ask for assistance from potential well-wishers as the funds we have are not enough. We will not start any other project until this one has been finalized. However, we have long term plans to construct three other sports facilities at the sub-county level,” said the county’s director for sports Francis Guma.

The region comprises eight sub-counties which have been clustered into three regions where other stadiums will be constructed according to Guma.

“By 2022, we hope we will be able to improve the other three facilities which I cannot refer to as stadiums but medium-size sub-county sports facilities,” he said.

No sports facility in Homa Bay meets the minimum requirement laid down the Kenyan Premier League to host its fixtures.

Construction work at Homa Bay Stadium remains the key pillar not only to the development but also supporting and uplifting the sports culture in the lakeside county that majority of the youths suffer in absolute poverty.

Kenya Insights allows guest blogging, if you want to be published on Kenya’s most authoritative and accurate blog, have an expose, news TIPS, story angles, human interest stories, drop us an email on [email protected] or via Telegram
Related Topics:Homa BaySportsStadium
Up Next