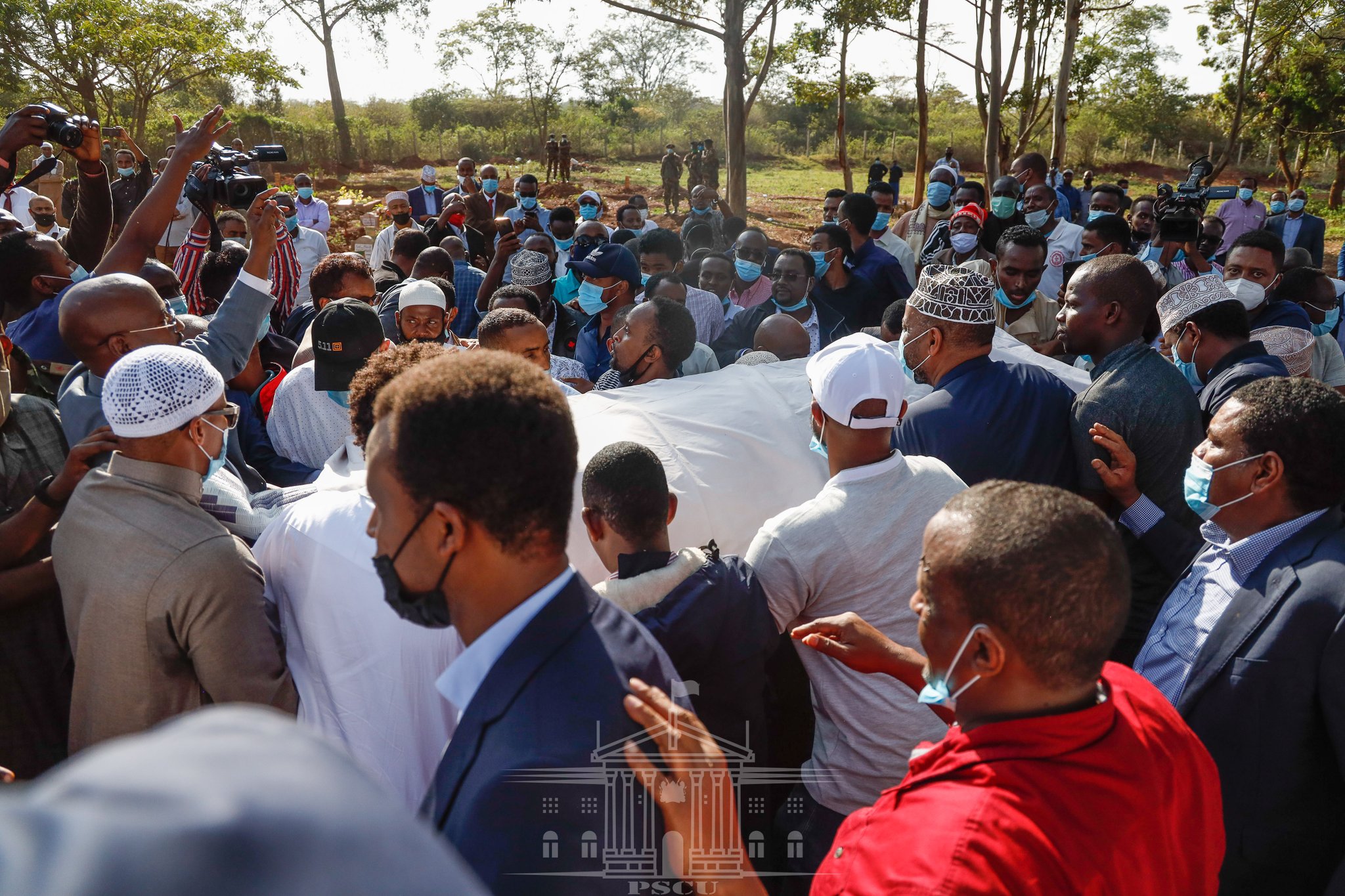 Senator Mohamed Yusuf Haji died on Sunday night while receiving treatment at the Aga Khan Hospital in Nairobi County and on Monday the 80-year-old Senator was buried after 4 pm prayers at the South C Mosque in Nairobi.

The normal rite of passage of the Muslim faithfuls of  prompt burial ignited a discussion online as it coincided with the burial of Simeon Nyachae who died on 1st and stayed for 2 weeks before burial.

Curious Kenyans wanted to know how the Muslims are able to conduct their funerals in the shortest time and what exactly happens behind the cemetery gates.

Firstly we rarely transport a body. You get buried where you passed away. You must be wondering Garissa would have been ideal burial place for him being a public figure. For us your burial is where maut or death will find you.

Our burials timings is mainly dictated by prayers times, remember we pray 5 times a day

Most of the burial prayers would coincide with the 1pm or 4pm prayers for various reasons ranging eg to allow immediate family like children to arrive etc. We try and avoid evening or nighttime burial unless it is case of accident and departed pught to be laid to rest as quickly as possible.

The body is prepared either at home or even at some mosque. Ghusl is the full body ritual purification mandatory before the performance of ritual and janaza prayer. We don’t use a coffin, we have a common built contraption that is used for everyone ( returnable)

Our mosque in South C does that very well and a few masjid in Mombasa. It is a new trend across many towns in Kenya since a Muslim passing away in your town it becomes your responsibility as a fellow muslims to give the departed bro or sister a good send off and burial. Growing up in Marsabit we used to lay to rest many muslims who die in road accidents as they head to Moyale and Ethiopia.

Once the body is ready ( The departed is wrapped in a simple plain cloth ( The Kafan) and that’s it . It costs less than 500 Bob.

The body is then carried away in a Janaza the common contraption and is placed at the back of the mosque awaiting the normal prayers to happen . Once the normal prayers have happened then announcement is made that we have a body of a departed bro or sister and if we could remain behind to join. It is considered a blessing to take part in such even if you were not known to the departed. We then bring the body to the front of the congregation.

Typically the son elder one will confer with the Imam ( Priest) and announce if there is anyone who owed the departed anything and if the departed owed anyone anything . Then the son or immediate family male member will announce that they will take responsibility.

We then all stand behind the Janaza and final prayers are led by the imam . Sometimes we have more than one body so they are all laid out in a line .

It takes less than 10 minutes and swiftly the body is picked and young men who most likely are not even known to the deceased jostle to be the ones carrying the departed.

Once at the graveyard immediate family members preferably sons and brothers to the deceased will go inside the grave which is always ready but we make a pillow to lay the head made out of mud.

Once the body has been removed from the Janaza the departed is laid inside the grave lying on their right side facing Kibla ( Mecca we all face Mecca to say our prayers. )

Wooden planks are placed as an enclosures inside and if you can’t find wood then concrete slabs is allowed.

Once done the family members step out and soil is the poured into the grave . Again total strangers mainly young men would do it and get soiled yet they may not even be known to the departed.

Women are not allowed at the cemetery and if they go then they can only watch from a distance. Men carry out the entire ritual once done then family members can be left behind to say extra prayers etc.

The whole burial will not last more than 30 Minutes and you are done .

If I may have skipped anything Aalahu A’alam. Allah knows best.

I hope this quick write up helps you to understand our faith.