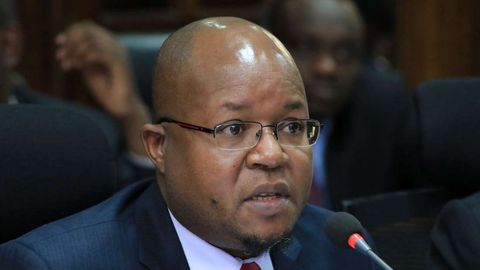 Energy and Petroleum Regulatory Authority ( EPRA) boss Robert Pavel Oimeke  was on Thursday arrested by EACC detectives and detained at the Integrity Centre’s basement cells after allegedly receiving a Ksh 200,000 bribe.
Confirming the arrest, EACC head of communication Mr Philip Kagucia said the suspect was arrested by the detectives after receiving the said money from an employee of an Oyugis based Petrol station.
According to the anti-graft agency, the station employee had sought Mr Oimeke help in reopening the station after it was closed after it was found in possession of super export petrol.
After being cleared by the Kenya Revenue Authority and paying a fine of Ksh 309,842 the station was given a clearance letter by the taxman.
Mr Oimeke is set to be arraigned on Friday.
Kenya Insights allows guest blogging, if you want to be published on Kenya’s most authoritative and accurate blog, have an expose, news, story angles, human interest stories, drop us an email on tips.kenyainsights@gmail.com or via Telegram
Related Content:  Missing Nairobi’s MCA Habiba Hussein Has Been In And Out Of Hospital For Two Years After Losing A Baby From A Complicated Pregnancy
Related Topics:
Up Next

Contractor In Sh2.18 Billion Road Project Risks Being Kicked Out Over Dismal Performance