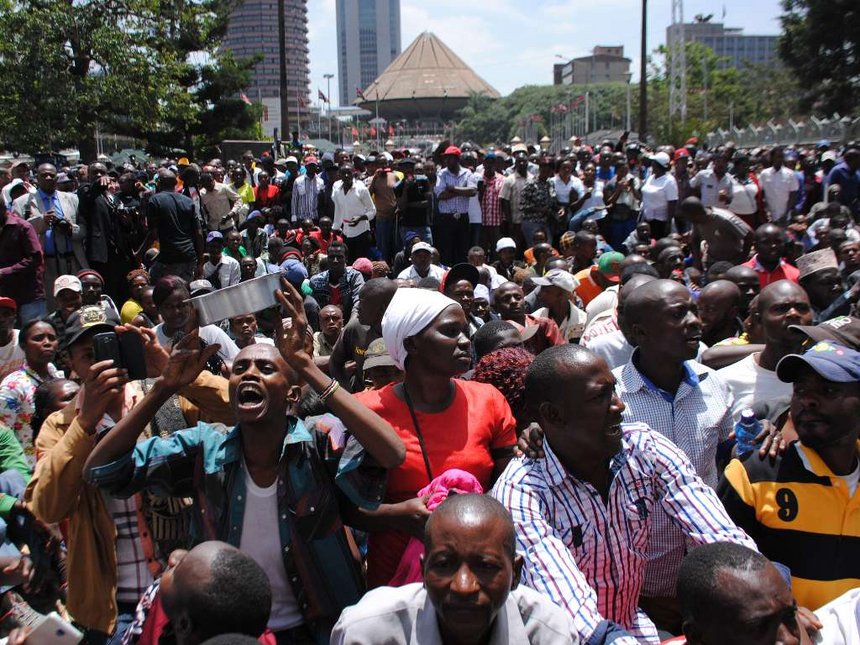 The hawkers in Nairobi’s busy business hub, Eastleigh are left in desperation state after being left in darkness following failed promises from the Nairobi County Government and National Lands Commission to give them back their land illegally being held by Private Developers, Alfa Traders.

The parcel of land that the Alfa Traders claims has been a market space for the hawkers before they were violently displaced on the takeover. Ombudsman came to the Hawker’s relief in their report that found the land to be a public entity open for the traders and at the same time figured out the alleged land lease held by the dubious contractors was fake.

The commission recommended the Nairobi County Government to repossess the land and allocate it to the hawkers and also for them be compensated for losses incurred when their stalls were destroyed during Alfa Traders violent takeover. Commission also recommended for the Chief Valuer of lands at City Hall to be relieved of his duties since he was caught to be part of the land grabbing cartel.

The National Lands Commission present during the Ombudsman’s Eastleigh report launch,  promised to give a conclusive report on the ownership of the contested land as early as the start of September.

Two months down the line, nothing has been forthcoming from both camps with Kidero mum, no cessation steps, all charlatans in City Hall seated pretty, NLC hasn’t given their report as promised. The hawkers are left asking themselves on who to turn to next since their operations have been stalled. The Business Community in Eastleigh ordered them out of their few available spaces.

Deputy President, Ruto recently attempted to intervene and his recommendation to have the traders move to a small piece of land around Pangani wasn’t welcomed.

Kenya Insights has established that despite all the orders on the Duping contractors to stop construction, nothing has changed and they’re continuing regardless. It gets interesting that the illegal construction is ongoing under a full police guard. Someone in the system has been compromised to facilitate the illegal construction. From our investigations, the developers have resorted to a bi-weekly construction that happen only at night with gun tooting plainclothed officers guarding the premise.

Who’s misusing state resources in frustrating the helpless hawkers, why is the the county government feigning disability in dealing with the private developers, why can’t Kidero adopt the Ombudsman recommendation to weed out the corrupt elements in his office that are facilitating land grabbing. Why is NLC silent on the report, why haven’t they released time within promised  timeframe?

Who will guard the hawkers from the bully richmen who are grabbing every single parcel of available public land. The County Government seen to have gone deep into bed with the wealthy businessmen together with NLC leaving poor traders in desperate states with tightened cost of living.

Kenya Insights, embarks on a lengthy justice trail for the traders and will push the agenda to shame the bully traders and the forces frustrating the hawkers steps.

Kenya Insights allows guest blogging, if you want to be published on Kenya’s most authoritative and accurate blog, have an expose, news TIPS, story angles, human interest stories, drop us an email on [email protected] or via Telegram
Related Content:  Safaricom, The Kenya's Big Bad Wolf
Related Topics:CorruptionEastleighInvestigationsKideroLand
Up Next