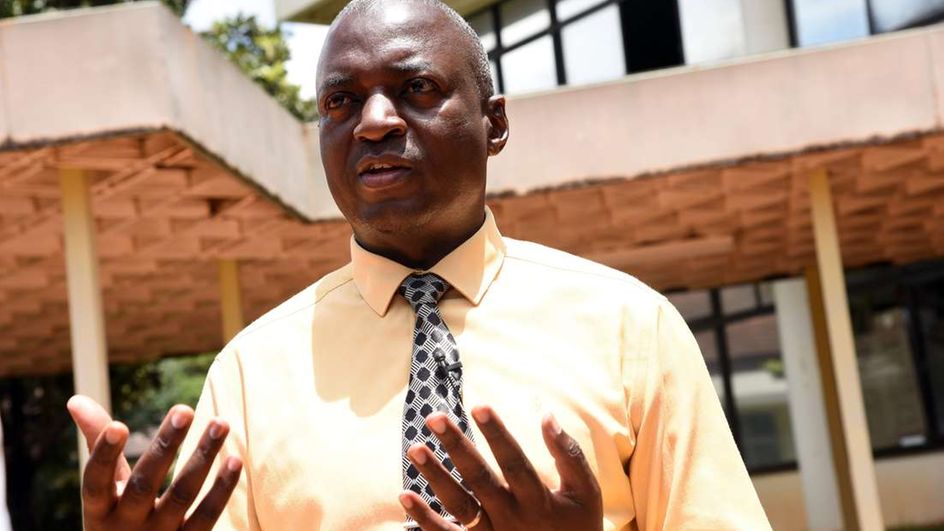 Dr Joel Lutomiah, the Kenya Medical Research Institute Centre for Virus Research director who was demoted over alleged failure to release Covid-19 test results to the Health Cabinet Secretary Mutahi Kagwe, on Friday told a parliamentary committee that he was condemned unheard.

A teary Dr Lutomiah told a Senate ad hoc committee on Covid-19 that he blamed his fate on the Ministry of Health acting director-general, Dr Patrick Amoth, and Dr Daniel Langat, the head of the ministry’s Department of Disease Surveillance and Epidemic Response Unit.

In a blow by blow account, Dr Lutomiah recalled how several calls led to his removalbefore he was given a chance to explain himself.

He said Dr Amoth called him and put him on loudspeaker in a conversation that also involved Mr Kagwe, which dealt him the final blow.

The revelations come at a time the country is still struggling to contain the Covid-19 pandemic, as the numbers keep on surging daily.

On Thursday, the country recorded the highest number of infections at 147, with the total cases hitting 1,618. Some 70,172 samples have been tested since March 13, when the first case was reported.

After receiving his demotion letter, Dr Lutomiah wrote to his boss, Prof Yeri Kombe, explaining what had transpired before his dismissal.

He narrated to senators that in one of the early laboratory Covid-19 testing meetings attended by Dr Amoth, Dr Langat, Mr Mamo , Prof Kombe and chaired by Chief Administrative Secretary Rashid Aman, they agreed that results generated in the previous 24 hours should be sent to Mr Mamo at the Covid-19 data centre by 8am for compilation so that Dr Amoth would get them at 9am.

Dr Amoth suggested in the same meeting that he was ready to receive the results by 10am so that labs could have sufficient time to compile them before they are sent to Mr Mamo.

In this case, the labs were given an extra one hour to relate and report the results, which meant that any time between 8am and 9am, the results should have been sent to Mr Mamo from respective testing laboratories.

“This was the norm and we were so keen on time, given the nature of the virus we were dealing with and how we had agreed with the ministry we would send the results,” Dr Lutomiah said.

At the same meeting, they all agreed that laboratories should only report results that were ready by the time of reporting and the pending ones would be combined with subsequent tests in the next 24 hours and reported the following day.

Dr Lutomiah told senators that at 6am on April 17, he received a call from a Kemri worker, Mr Samuel Owaka, who was responsible for preparing results for reporting that morning, informing him that he had a medical emergency.

He said his child was sick and he could not report  to work in good time to prepare the results of the previous day.

Since he could not reach out to other members responsible for preparing the report, Dr Lutomiah went to the institute in person to prepare the report for submission to the ministry.

At around 7.45am, Dr Lutomiah received a call from one Alex of the Covid-19 data centre informing him that there was a change of plans: the Cabinet secretary was going to hold a press briefing at 8:30am, and not the usual time of 3pm because he had another engagement in the afternoon. Therefore, the results were required by 8am.

After a few minutes, he received three calls from Dr Langat, enquiring why he had not sent the results, as he was going to delay the CS’s press conference.

He said he compiled the results from Kilifi and Kisumu and sent to Mr Mamo and copied Dr Langat at 8.06am. This, he said, was on the understanding that pending results would be reported the following morning as earlier agreed.

A few minutes later, he received a call from Mr Mamo, demanding to know why the results from other laboratories had not been included in the report.

“I responded by informing him that I had not received the results and reminded him that based on what was agreed earlier, any pending results would be reported the following day,” he said.

In the ensuing confusion and phone calls, he received a call from Dr Amoth, asking him to confirm if he had received results from the remaining laboratories, and he said he had not. Dr Amoth hung up.

Dr Amoth then called again and informed him that he was on loudspeaker and that CS Kagwe was listening in.

He was asked again to confirm whether he had received the results from the other laboratories, and if by the time he sent the initial results he had not received them.

“I heard Mr Mutahi calling my name and when I was just about to respond to him, Dr Amoth interjected and said he was not going to allow the CS’s time to be wasted on a conversation that was not yielding much. And he hung up,” he said.

After a few days, he was called by Prof Kombe’s secretary, instructing him to see the director.

He went and he was handed a letter written by Prof Kombe, dismissing him for failure to release the results on time that Friday.

“This is further to our meeting with the Cabinet secretary this afternoon on the matter relating to your conduct. You, this morning, delayed the release of Covid-19 laboratory results of the previous evening contrary to an earlier agreement with the Ministry of Health that you release them before 8am. You, therefore, have failed in your duty to honour a matter that is of national importance,” the letter from Prof Kombe says.

“I hereby relieve you of your duties as the director, Centre for Virus, with immediate effect. You will hand over to Dr Samson Konongoi, who will act until a substantive holder is appointed. Meanwhile, revert to your position as a research scientist.”

Since the first case was reported in Kenya in mid-March, Kemri was on the frontline under the leadership of Dr Lutomiah on testing.

Kemri has the largest testing capacity in the country, and the necessary structure and infrastructure to respond to the pandemic were put in place by Dr Lutomiah.

He was the chairman of the Kemri Rapid Response, which is in charge of laboratories, and would appear on the Ministry of Health committee to give the position of the institute on Covid-19.

Related Content:  Silverstone Airline Called Out For Poor Post Crash Crisis Management As A Victim Is Flown To US For Surgery

Responding to senators whether he was taken through disciplinary action or a warning before he was dismissed, Dr Lutomiah confirmed to the committee that all he was given was a dismissal letter and nothing more.

“Given my position and in the event that I do something that warrants an action to be taken against me, I have to appear before the board, but even before appearing before it, I was to appear before the human resources management advisory committee, which requires one to present his case before its escalated to the Board of Management,” he said. “I am of the opinion that whatever action that was taken against me was hurried and I was not given the chance to present myself.”

He continued: “I wish to state that prior to this unfortunate event that led to my demotion, my performance as a substantive holder of the position of deputy director Kemri had not been questioned. Which means I had not received any warning, verbally or written.”

According to a letter sent to the Senate from the Ministry of Health responding to the matter, officials maintained that Dr Lutomiah was not sacked from Kemri but the changes occurred within the re-organisation of the institution.

It states that an agreement between Kemri and the Ministry of Health stated that the results of Covid-19 would be released to the ministry the next day between 8am and 9am.

As the deputy director, the ministry said, he had the overall responsibility of collecting and transmitting Covid-19 results from all the satellite laboratories on time.

“Owing to the national importance of transmitting the results on time and delays attributed by Dr Lutomiah, an administrative action was taken against him,” said the statement from the ministry.