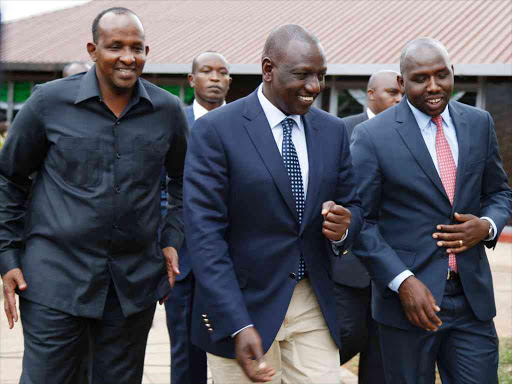 On Saturday night, many were baffled by the Deputy President’s unusual tweet suggesting that he had unsubscribed from a 411 news alert service.

At first, many speculated that it was a subliminal reply to Uhuru’s dare that the DP should resign sharply contradicting his earlier assertion in Isiolo where he said he wouldn’t resign.

It was Senator and ally Murkomen who came in to break the waters. 411 SMS news alert service which is powered by Capital News, owned by Chris Kirubi had churned news that didn’t go well with the DP and his team who then took to social media urging their followers to unsubscribe from the service that charges Sh5 daily.

Kirubi is a close associate of the President.

The resist move borrowed from NASA coalition post the 2017 elections  is not only meant to deny Capital revenue but to delegitimize it as a state machinery. And to be straight to the point, it is the news about Ruto being heckled in Isiolo that possibly rubbed the DP’s camp the wrong way.

Even though there’s a viral video online showing the DP being heckled by youths chanting pro-BBI slogans in Isiolo, it’s unclear why they picked it as propaganda from the state hence the mobilization to resist the services.

There’s no difference between SMS news alert 411 and Joseph Goebbels’ notepad. It is the state’s most vicious propaganda tool against hustler’s and their quest for inclusion.
UNSUBSCRIBE is the only option left.

The same message of ‘UNSUBSCRIBE’ has been replicated elsewhere by the DP’s adherents.

To UNSUBSCRIBE from 411 news alert please dial *456*20# and follow the instructions. Thank you ! pic.twitter.com/MD2GTXYJTX

Propaganda is to a democracy what the bludgeon is to a totalitarian state. Noam Chomsky

Let us UNSUBSCRIBE to 411 not their weapon of PROPAGANDA! pic.twitter.com/PnVw2jKO9X

To all Kenyans that believe in Hustler Nation narrative, I ask you all to kindly unsubscribe from 411 updates. I have personally led by example. Thank me later#FreeDennisItumbi#KaziNiKazi pic.twitter.com/i2H5DVU1hN

Other media houses like NMG and Citizen have not been spared either on the onslaught.

411 breaks the news by sending alerts to subscribers on a diversity of topics. Resist has been a tool used against corporates deemed to be working against popular interests, when Odinga urged his supporters to resist certain products that helped Jubilee cling to power, the effect was felt that they had to beg him for mercy.

The Media Council of Kenya has condemned the action, and was set to issue a formal statement.

The action was also condemned by Mount Kenya Youth Caucus which called for tolerance in the country on media coverage.

“Last night, Deputy President William Ruto embarked on a sustained attack on one of the media houses, urging his supporters to unsubscribe from their news alert services – the crime being that the said media house reported of an incident that happened in Isiolo where he was booed,” the group said in a statement, terming it a “Trump playbook.”

“We know this Donald Trump playbook very well. You berate the media for doing their job, and then turn to claim victimhood when called out, as you get cheered on by your ethnic mob itching to run riot on social media same way those Trump hooligans were incited to Capitol Hill to go lynch those who didn’t support the nullification of the US Presidential election results, ” they added.

“If someone is booed in Isiolo for selling a hustler narrative that is fallacious and antagonistic, the media will report it as it is. If you aren’t happy with the public knowing how unpopular your divisive agenda is, you are at liberty to buy your own media house with the public money you have been stealing, and we shall be there to call in and ask them to be objective in their reportage.”

The war declared between Ruto and Kirubi and other news outlets is a wait and see what happens match. Branding outlets fake news is also another powerful propaganda tool that former US President Trump used against mafia houses that didn’t sing praise sings to him, it did not only put the lives of many journalists in danger but also jeopardized the freedom of speech speech and free media.

Related Content:  Sonko Splashed Sh4M Of County Money On Daughter’s New York Trip
Kenya Insights allows guest blogging, if you want to be published on Kenya’s most authoritative and accurate blog, have an expose, news TIPS, story angles, human interest stories, drop us an email on [email protected] or via Telegram
Related Topics:
Up Next