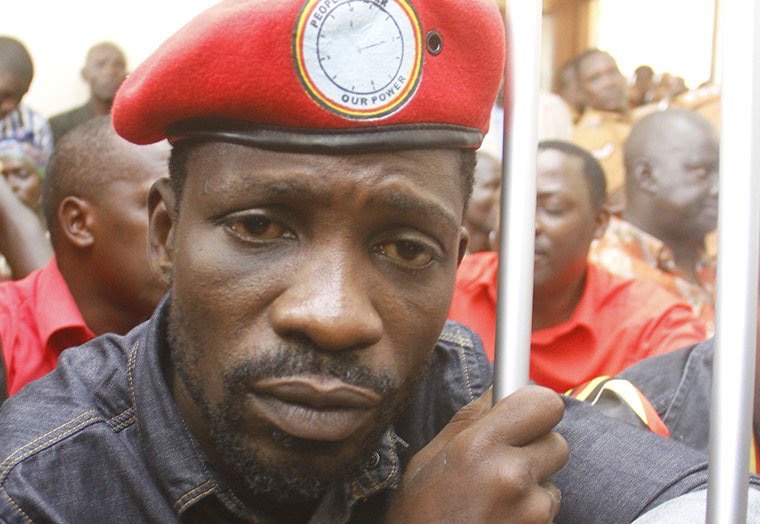 Injured Bobi Wine while appearing in court where he was charged with treason and later released.

Uganda Government through the East African Affairs ministry has written to the parliament of Kenya demanding that its legislators apologise for allegedly abusing Uganda President Yoweri Museveni.

Kenyan lawmakers including Jared Okelo (Nyando), Babu Owino (Embakasi East) and Gideon Keter (nominated) of the Kenya Young Parliamentarians Association said they would first stage a protest against the arrest and torture of Bobi Wine at the Ugandan embassy in Kenya before escalating it into Uganda.

Now, the ruling party lawmakers in Uganda are demanding that action be taken against the Kenyan MPs for what they called meddling into the affairs of a sovereign state.

Unsatisfied by the minister’s verbal ‘action taken’ statement, Rukiga Woman MP Caroline Kamusiime Muhwezi insisted on knowing what action had been taken against the MPs, whom she said used abusive language to the person of the President of Uganda, which to her was unacceptable.

“After the recent protests, the Kenyans including MPs came out and abused our president but nothing was done by the ministry. They were demanding our president to free Bobi Wine. Free Bobi Wine, as who?” Kamusiime said.

The legislators are now threatening that if the Kenyan parliament does not take action against the legislators, the ministry would not hesitate reaching Kenyan President Uhuru Kenyatta for redress.

Kenya Insights allows guest blogging, if you want to be published on Kenya’s most authoritative and accurate blog, have an expose, news TIPS, story angles, human interest stories, drop us an email on [email protected] or via Telegram
Related Content:  Revealed: Negotiations With Doctors Turns Ugly As PS Nicholas Muraguri And Top Afya House Officials Resorts To Physical Threats On KMPDU Council To Call Off Strike
Related Topics:
Up Next

The Over $850 Million in U.S.-Kenya Commercial Deals and Engagements President Uhuru Sealed In His US Visit