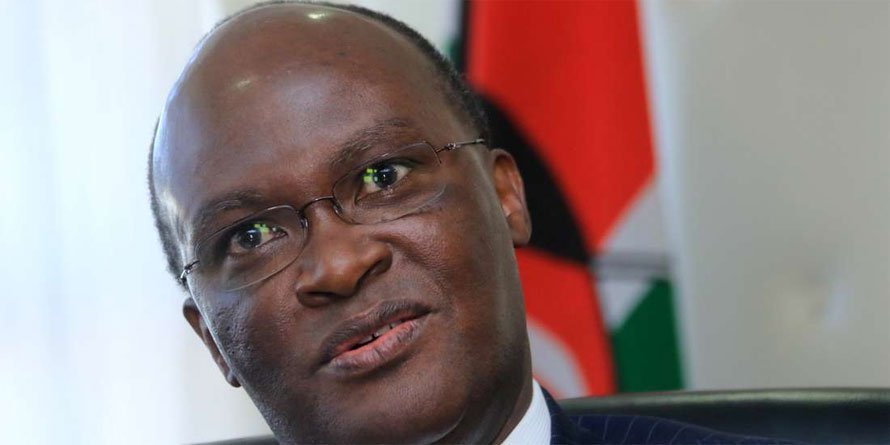 Mombasa Business community under the lobby group Fast Action Business Community Movement and the State are currently not having a tot of cordiality. The movement which is drawn from the larger business community from the CFS to Tuk Tuk riders, came together following an alarming signs of the imminent collapse of Mombasa economy.

In raising the alarm, FABCOM said the directive by the government to restrict transportation of cargo from the port via SGR single handledy marked the slow death of the monumental coastal city. Many businesses not only in transport but those like hotels, lodgings, shops that indirectly depended on the freight industry collapsed and thousands laid off as businesses were rendered withered.

In a petition that they’ll lobby group has prepared for the president, they asked for a free market policy that would allow traders to go as they wish with their businesses without state restrictions that have since proven to be costly.

According a study done by the University of Nairobi commissioned by Mombasa County Government, upto Sh17.4B In revenue had been lost since the implementation of the restricted transportation of SGR by the state which has dealt a great blow to the Mombasa economy.

Below is a copy of the Petition. 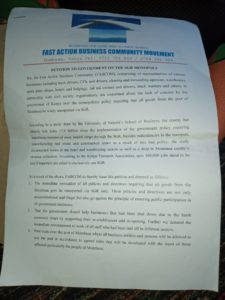 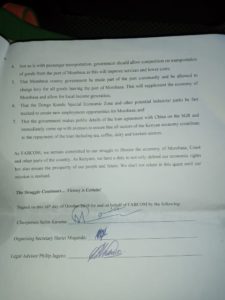 Weeks back, the government had purportedly withdrawn the strict SGR directive to allow importers to use their own desired means of transport as it should be under The Hague Rules set international for free trade.

However, we’ve since learnt that things are now as they should be in the ground. Lobby group insists the suspension shouldn’t be an option instead it be uplifted in entirety. Cargo delays are still being reported and lives are yet to be back into normalcy despite the government giving assurances that all is back in track.

In the past weeks, you must have noticed unlimited coverage of Mombasa and the media narrative that normalcy at the port has been regained and lives as well. This the business group has dismissed as a fallacy and part of the broader propaganda machinery put in place by the state.

Morning of today, our writer had received an intel that strangers had been hired to pose as businessmen who’re satisfied with the state’s suspension directive and that for them business was back to normal. They didn’t disappoint and showered praises to the transport CS, they called the lobby group as imposters which is ironical. To further discredit the group, they alleged the protesters were ferried from Nairobi which is yet another blatant lie. As for who would’ve hired and secured a media coverage for the small group is not a rocket science.

We’re also told of a planned maligning social media campaign to further discredit the lobby group as imposters yet its confirmed they’re real owners of the failing businesses. Standard Media recently exposed the CS Macharia for having billions in his docket and little to show for it. Standard has since come under harsh criticism with a sponsored campaign by paid bloggers painting it as a fake news source. A classic escape goat route. Macharia has been at loggerheads with the traders over the SGR directive and determined to have it remain stuck by all means.

New entrant yet unsurprising into the debate is CS Balala who’s considered a political reject in Mombasa. In a well crafted move to discredit the movement and grievances raised, Balala alleged that CFSs were being used for moving drugs and ivory trade. He had rebuttals

It's very sad when one of our own (from coast) is among the fore front men pushing us to the wall. I listened to the presser that Najib Balala gave and the accusations are quite astonishing. pic.twitter.com/CUEY84UE8y

Someone should school ⁦@tunajibu⁩ on how a CFS operates

It’s a shame that instead of the state engaging the stakeholders for an amicable deal, they’re engaging in sideshows which is not going to solve the matter that is not going anywhere, which the is the despaired state of Mombasa economy. The lobby clearly is not the issue here but rather the issues raised. As to what desperate move they’ll take next, it’s time to tell and us to report to you.

Related Content:  2019 KCSE Results Released, How To Check Via SMS
Kenya Insights allows guest blogging, if you want to be published on Kenya’s most authoritative and accurate blog, have an expose, news, story angles, human interest stories, drop us an email on tips.kenyainsights@gmail.com or via Telegram
Related Topics:
Up Next