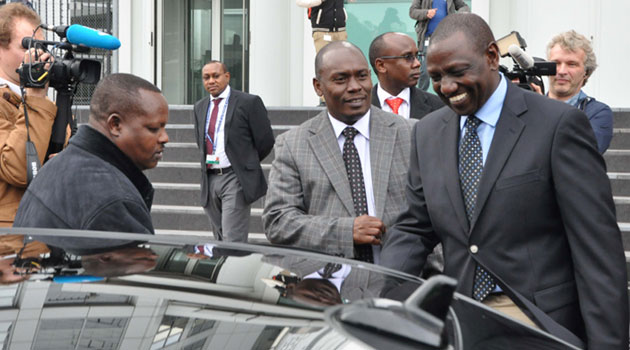 William Kabogo And William Ruto during The Hague Days.

For the longest time it has been speculated that former Kiambu Governor William Kabogo was rigged out during the party’s primaries in favor of Kabogo. This was seen as apparent given the bad blood that the two politicians had at that time.

Kabogo was one of the openly vocal politicians from the Central region who objected the idea of the Kikuyu community supporting the DP in his bid for 2022. Kabogo had blamed his political woes on Ruto in what he claimed was a ploy to lock him out of 2022 politics.

He blamed Ruto for not taking action against his complaints and fears that the outcome of the Jubilee Party nomination exercise had already been predetermined. In a thinly veiled attack aimed at Ruto, Kabogo cautioned the DP that it was not automatic that he would get Mt Kenya votes come 2022.

While appearing on Citizen TV, Murathe who’s leading a ‘Stop Ruto Movement’ from contesting in 2022, admitted to rigging during the party nominations. “Some interested parties rigged out highly popular people, especially from Mt Kenya, and planted the people they wanted,” he said. “A lot of people were left out. I watched it and was seething inside, but there was nothing I could do about it.”

DP William Ruto spearheaded the primaries. On the first day, the exercise was cancelled. It was mired in confusion and chaos. It resumed the following day. Kabogo amongst other leaders from Central who were agruened including Jaguar who wept uncontrollably stormed the Jubilee Headquarters in Pangani to lodge their complaints. Most fell on deaf ears.

Related Content:  How Murkomen is feeding on Ruto-Toglos beef

According to the 2022 game plan  Waititu had been poised to deputize Ruto as the DP. It’s however not definite as a lot has happened in the recent days. Kabogo made peace with Ruto and was even speculated to be in support for his 2022 bid. Murathe’s admission also seems to have opened the wounds for Kabogo who said, “Murathe confirms they rigged party nominations in 2017. What a shame washing dirty linen in public.”