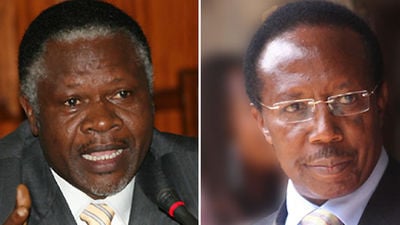 The Supreme Court has set date for the hearing of a petition seeking clarification of whether former Cabinet minister Chris Okemo and former Kenya Power boss Samuel Gichuru can be extradited to Jersey Island to face theft and money laundering charges.

The judges are expected to determine who between the Attorney-General and the Director of Public Prosecutions (DPP) has the legal authority to commence extradition proceedings in court.

The DPP moved to the Supreme Court after the Court of Appeal quashed the extradition of Mr Okemo and Mr Gichuru in March 2018 saying the process had been wrongly initiated by the prosecutions boss.

In the appeal, the DPP wants the appellate court’s decision set aside.

The Royal Court of Jersey said the Gichuru-Okemo secret accounts received bribes in hard currency estimated at Sh997 million, but only half of the entire loot was found and seized.

Mr Gichuru and Mr Okemo had reportedly subtly wired large sums from the Jersey account to themselves in the years to 2002. The authorities were only able to recover foreign currency amounting to Sh526 million and Sh444 million was to be wired back to Kenya after deducting court expenses.

Mr Okemo served in President Moi’s government as the Minister for Energy between 1999 and 2001 while Mr Gichuru was the managing director of Kenya Power & Lighting Company between November 1984 and February 2013.

A court in Jersey issued a warrant for the arrest of Mr Gichuru and Mr Okemo on April 20, 2011, but the two have challenged the move through multiple legal suits in Kenyan courts.

The DPP wanted the two sent to Jersey to face corruption and money laundering charges.

Mr Gichuru and Mr Okemo face a jail term of up to 14 years each if they are extradited to Jersey and found guilty of the racketeering charges preferred against them.

Interestingly, Kenyan authorities have never opened criminal proceedings against the duo, whose bribery scheme cost taxpayers billions of shillings and hurt the development of power plants — ushering in power blackouts and expensive electricity.

The asset seizure proceedings and judgment offer a detailed breakdown of the goings-on in the secret account and a rare glimpse of the extent to which Mr Gichuru and Mr Okemo benefited from the bribery scheme.

The scheme was executed through Windward Trading Ltd — the entity through which Mr Gichuru received hefty kickbacks to award suppliers lucrative tenders during his two-decade tenure at the helm of Kenya Power that ended in 2003.

Mr Gichuru in August 1986 set up Windward Trading in Jersey as the entity which would receive bribes disguised as ‘commissions’ or ‘consultancy fees’ from firms which won Kenya Power tenders.

Walbrook Trustees (Jersey) Ltd were the administrators and face of the company and would wire kickbacks received to Mr Gichuru and Mr Okemo.

However, in May 2002, Walbrook filed a suspicious transaction report with Jersey authorities and refused to make any further payments to Mr Gichuru from these accounts, leading to a freeze on the accounts.

The scheme was brought into sharper focus by Mr Gichuru’s messy divorce case where his wife lifted the lid on his secret offshore accounts, prompting Jersey authorities to further investigate the matter.

Windward on February 24, 2016 pleaded guilty to one count of possessing proceeds of crime and three counts of acquiring profits from criminal conduct.

Kenya Insights allows guest blogging, if you want to be published on Kenya’s most authoritative and accurate blog, have an expose, news TIPS, story angles, human interest stories, drop us an email on tips.kenyainsights@gmail.com or via Telegram
Related Topics:Chris OkemoKPLCmoney launderingSamuel Gichuru
Up Next