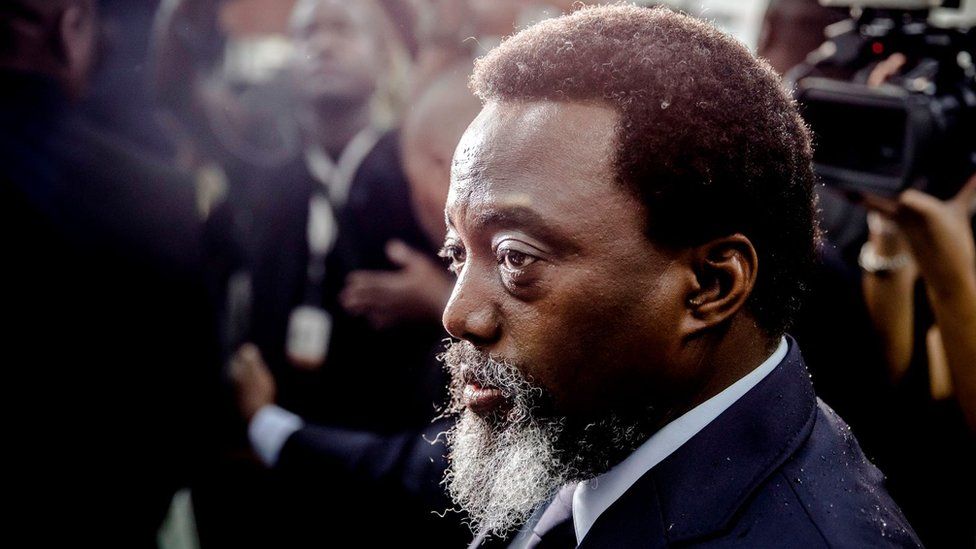 BGFIBank is the biggest bank in central Africa. It has always enjoyed suspiciously close relationships with some of the region’s most notorious heads of state. But no one knew quite how close – or quite how suspicious – until now. A massive new investigation into some 3.5-million leaked documents shows how the bank played a central role in the alleged looting of hundreds of millions of dollars from the Congolese state – even as most of the population lives in extreme poverty.

It is a short walk from the stately Palais de la Nation, the official residence of the Democratic Republic of Congo’s head of state, to the gleaming, modern Kinshasa headquarters of BGFIBank. We don’t know if Joseph Kabila, during his 18 years as president, ever visited the
bank’s offices in person. We do know that the bank was owned and run by several of his closest family members; and that the proximity between the bank and the presidency is far more than just geographic.

The Continent can reveal that the bank allegedly played a central role in a years-long scam that allowed Kabila’s family and close associates to launder at least $243-million in public and suspect funds, and make multimillion-dollar cash withdrawals.

On one occasion, $6-million was withdrawn – in cash – from an account linked to the Kabila family. To put this in perspective: 60-million Congolese citizens live below the international poverty line of $1.90 per day.

These startling figures come from the biggest-ever leak of African bank records: some 3.5-million statements, emails and documents that give an unprecedented insight into the inner workings of BGFIBank, the largest bank in central Africa.

The leak was obtained by PPLAAF, the Platform to Protect Whistleblowers in Africa, and the French investigative unit Mediapart, and shared with the European Investigative Collaborations network. The documents were trawled through by a consortium of investigators representing 19 different media houses across 18 countries, including The Continent, as well as five NGOs.

These startling figures come from the biggest-ever leak of African bank records: some 3.5-million statements, emails and documents

This investigation, known as Congo Hold-Up, offers the most convincing evidence yet of widespread corruption during Kabila’s tenure as president, which lasted from 2001 to 2019. It also paints a damning picture of a bank which flouted rules and regulations – both its own and those imposed by national and international authorities – to enable looting on a grand scale.

“For me, BGFI is a mafia bank,” said Jules Alingete, the head of the Inspectorate General of Finance, who was appointed last year by Kabila’s successor, President Felix Tshisekedi. “It is unacceptable what happened.”

The consortium made repeated and sustained attempts over the past month to obtain comment from senior executives at BGFIBank, including from the holding company’s headquarters in Libreville, and its offices in Kinshasa and Paris. The bank did not respond in any way.

The oil company that wasn’t

It is another short walk, along Kinshasa’s wide, colonial-era avenues, from the BGFIBank offices to 43 Avenue Tombalbaye, where an office block has been built in the heart of Kinshasa’s upmarket commercial district. The story of this land’s ownership is a case study in how money was siphoned from the Congolese public purse into the hands of Kabila’s inner circle  with the bank playing a central role in allowing it to happen.

Until 2013, the land was owned by Philippe de Moerloose, a wealthy Belgian businessman with ties to President Kabila. Then he agreed to sell it to Sud Oil a shell company with no ties to the oil business, and no evidence of having conducted any commercial activity at all. At the time, Sud Oil did not appear to have any assets or funds in its account at BGFIBank.

Sud Oil was, however, very well connected to the then-Congolese president. Gloria Mteyu, Kabila’s sister, owned 20% of the company; Aneth Lutale,
Kabila’s sister-in-law, owned the rest. Sud Oil agreed to pay $5million upfront for the building, with another $7million to be paid in instalments over the next year. Before agreeing to the deal, De Moerloose demanded a bank guarantee for the outstanding amount. Despite the complete lack of security offered by Sud Oil, BGFIBank provided
that guarantee.

In other words, if Sud Oil failed to pay, the bank itself would be liable for the debt. An unusual commitment, given that Sud Oil had no assets.

The man who agreed to these terms was Francis Selemani, who was then the chief executive of BGFIBank’s Congolese operations. Selemani also happens to be President Kabila’s foster brother, and is married to Aneth Lutale – the majority owner of Sud Oil. Kabila’s sister Gloria, who owned the rest of Sud Oil, at the time also owned 40% of BGFIBank in the DRC.

But Sud Oil still needed to find the $5-million for the initial payment. Just before it was due, the Banque Centrale du Congo the DRC’s central bank, the keeper of the country’s treasury – transferred $5.5-million from state coffers into Sud Oil’s account at the BGFIBank. This appears to be a brazen violation of Congolese banking laws, which prevent the central bank from funding private companies. Typically, central banks formulate a country’s monetary policy and provide financial services for the government and commercial banking system.

Some $5-million was then transferred from the Sud Oil account to De Moerloose’s bank in Switzerland.

In the time it took to complete these transfers, the Congolese state became poorer to the tune of $5.5-million, while the Kabila family gained ownership of a luxury multimillion dollar property – with all these transactions facilitated by BGFIBank.
Extensive attempts were made through various different channels by the consortium to contact the people named in this investigation, including Kabila, Selemani, Mteyu, Lutale, and De Moerloose. Detailed questions were sent to the current and former governors of the Banque Centrale du Congo.

If Sud Oil failed to pay, the bank itself would be liable for the debt. An unusual commitment, given than Sud Oil had no assets

No one responded to these requests for comment, with the exception of De Moerloose, who said that he had corresponded with Selemani over the “payment guarantee” granted by BGFI, and that he “at the time demanded a copy of the register of shareholders” from Sud Oil and there was no reference to any member of the Kabila family.
In the absence of any other official comment, the documents must speak for themselves. What they show is that this pattern of dubious transactions, riddled with conflicts of interest and apparent violations of both Congolese law and international banking regulations, was repeated again and again.

A close analysis of the leaked documents conducted by the Congo Hold-up consortium shows that $51.4-million was wired directly from the central bank into Sud Oil’s account at BGFIBank. A further $42.5-million came in from other state entities. Tens of millions more came from payments linked to the Chinese owners of copper and cobalt mines in the country.

The documents also show that at least $80-million was withdrawn in cash from Sud Oil and related accounts between 2013 and 2018, including several multi- million dollar withdrawals. Congolese law limits dollar withdrawals to a maximum of $10,000 per day.

BGFIBank’s close links with the central African region’s ruling elite have attracted scandal before.
The bank began life as the Gabonese branch of the Banque de Paris et des Pays- Bas (better known today as BNP Paribas). It was renamed in 1996 as Banque Gabonaise et Française Internationale – BGFIBank – due to its increasingly close links with the Gabonese state. As of today, at least 10% of the bank’s holding company is owned by companies linked to the family of Gabon’s President Ali Bongo.

Pascaline Bongo, the president’s sister, is on the board of the holding company; and, until last year, so was former finance minister Emile Doumba.
Sure enough, when the Bongo family purchased 12 luxury properties in France between 1996 and 2008, they did so via an account at BGFIBank. These deals are at the heart of a major corruption case in France, with French prosecutors saying that the late President Omar Bongo’s salary cannot account for the vast sums of money that were spent.

And in the neighbouring Republic of Congo, the local subsidiary of is run by Jean-Dominique Okemba, the country’s much-feared intelligence chief who also happens to be the nephew of President Denis Sassou Nguessou.

The president’s son, Denis Christel Sassou Nguessou, is currently under investigation by authorities in the United States for allegedly using funds embezzled from the state petroleum company to buy two luxury apartments in Florida, three Range Rovers, a Patek Philippe watch worth 110,000 euros, and jewellery to the value of $1.4-million, as well as a number of private plane trips for himself and his entourage. These funds were channeled through shell companies with accounts at BGFIBank, according to a Global Witness investigation.

The world of international finance is supposed to be tightly controlled. There are regulations in place to prevent the flow of suspicious money from one country to another, and banks play a central role in enforcing these regulations.

When high-profile politicians (known in the industry as “politically exposed persons”) are involved, the rules are even stricter. Those rules were poorly enforced at BGFIBank, as even its own audit in 2017 concluded: “The sum of the weaknesses described creates for the bank a very high exposure to operational, litigation, money laundering and reputation risks,” concluded auditors KPMG.
That internal audit was triggered by another, much smaller leak of documents, which again suggested widespread corruption by Kabila’s inner circle. The whistleblower on that occasion was Jean- Jacques Lumumba, grand-nephew of Congo’s liberation hero Patrice Lumumba.
Lumumba joined BGFIBank in Kinshasa as the head of the credit department in February 2016. It didn’t take him long to notice that something was badly wrong. When he confronted Selemani the CEO and Kabila’s adopted brother with evidence of suspicious transactions, he claims that Selemani threatened him with a gun (Selemani has not responded to this claim).

“The bank effectively exists to facilitate corruption, and there have been no consequences,” Lumumba told The Continent. “You know, Patrice Lumumba was the first Congolese to really fight against corruption. He would have been devastated to see his country exposed to so much of it.”

Meanwhile, the DRC remains one of the poorest countries in the world, with 73% of its population living in extreme poverty. With the help of a friendly bank, Kabila and his family became considerably richer during his 18 years in office. The people that the former president was supposed to be serving did not.