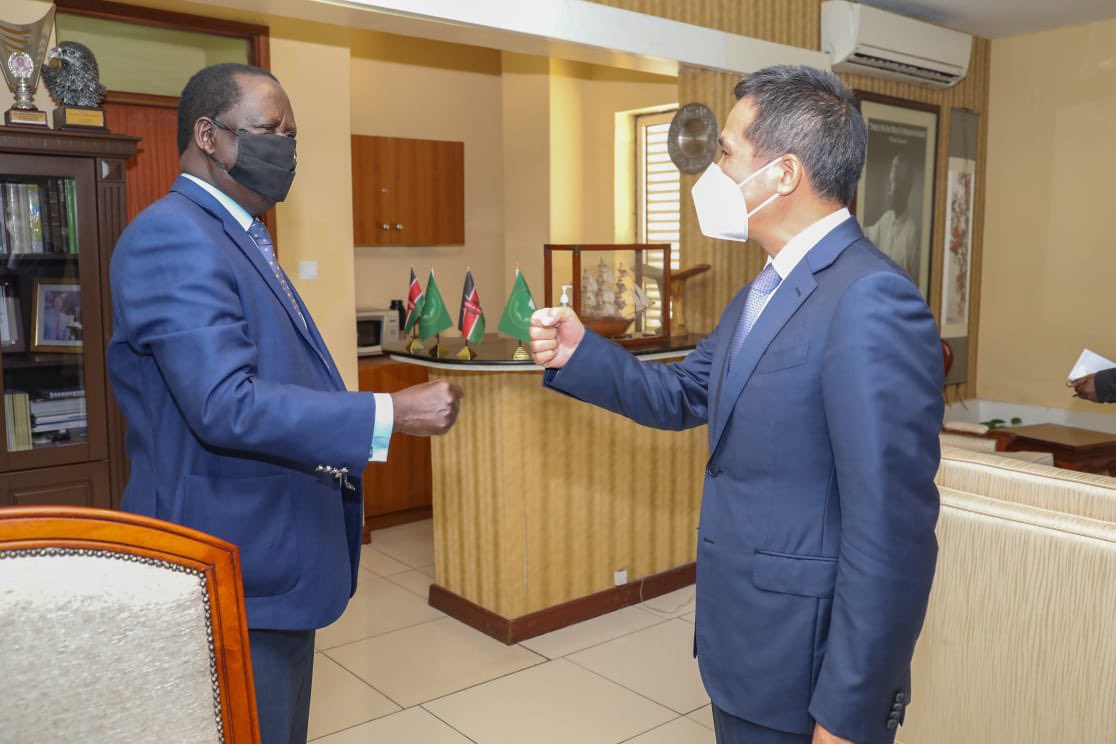 The Chinese government has undertaken to accord Kenya and her people priority once it avails its own covid-19 vaccine. Chinese ambassador to Kenya H.E. Zhou Pingjian noted that President Xi Jinping’s administration will continue to stand in solidarity with developing countries, especially in Africa, in efforts aimed at defeating the pandemic that has caused untold suffering to humanity as well as disruptions to economic and social activities.

Speaking after a meeting with Kenya’s opposition leader Raila Odinga, Zhou reiterated his country’s promise to “taking the lead in the search for a safe and effective covid-19 vaccine and making it affordable and available to Africa”, an offer welcomed by the Orange Democratic Movement leader.

“We want to thank the Chinese government for its commitments to ensure that once the vaccine is available, it will be easily accessible and affordable across Africa,” Raila said.

Already a potential covid-19 vaccine developed by China National Biotech Group (CNBG) is in the final stages of clinical trials in a number of countries including some in Africa like Morroco.

Researchers have expressed confidence in the vaccine which they say is safe given that it has already been approved for an emergency inoculation programme in China targeting essential workers and others at high infection risk.

According to the World Health Organization, out of the ten coronavirus vaccines that have progressed to Phase III trials globally, a record four are being developed by Chinese scientists.

The promise is a follow up to a pledge made during a recent meeting between Chinese President and African leaders including Kenya’s Uhuru Kenyatta, where Beijing emphasized the importance of collaboration and called for unity, solidarity, and joint efforts to contain the pandemic while paying particular attention to people in vulnerable situations.

Soon after the first case of coronavirus was reported in Africa, China responded swiftly, leading a massive resource mobilization to aid the fight. Both the government and Chinese private firms like Alibaba delivered the much-needed protective gear to virtually every nation in the continent.

During the meeting with Odinga, Ambassador Zhou pledged more support for Kenya’s industrial development, in line with Mr. Odinga’s calls for more focus on productivity.

At the same time, Odinga called for a speedy return to multilateralism and co-operation in managing global affairs, including the covid-19 pandemic and climate change.

He also welcomed China to scale up its support for infrastructure development in Kenya and Africa.

The two also discussed other local issues currently shaping public discourse including the Building Bridges Initiative where Odinga gave an update on the progress made so far in seeking to build a more cohesive and united Kenya.

“Odinga took the opportunity to explain key aspects of the Report of the Steering Committee on the Implementation of the Building Bridges to a United Kenya Taskforce.” A statement from Raila’s spokesman Dennis Onyango read