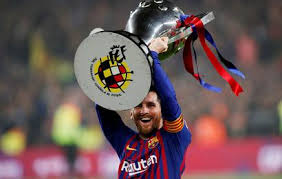 Barca has done it again. This time around in a world class performance from this seasons La Liga championship.

Some then hoped there could be a race when they drew 4-4 at Villarreal but a few days later they hammered Atletico and that was the genesis of their race to victory.

Even if Barcelona had collapsed, Real Madrid were too far behind to capitalize while Atletico, fragile away from home, have never looked capable of the winning the run.

Barcelona may yet prove they are the best team in Europe in the UEFA competitions when they met UK’s Liverpool in the semifinals.

That aside, Barca are indisputably the best in Spain after they wrapped up their fourth La Liga title in five years on Saturday.

Barca are now nine points clear of Atletico Madrid with three games left to play.  While Real Madrid gaze set to finish runners up in consecutive seasons behind the titleholders by double numerals in terms of points.

The shortcomings of Real, who now own the pathetic record of winning the La liga only once in seven years, are put down unembellished by the table but a smaller margin compliments Atletico too.

Here’s the video, In Spanish language, of Barcelona’s 1-0 against Levante that secured them the Trophy.

Kenya Insights allows guest blogging, if you want to be published on Kenya’s most authoritative and accurate blog, have an expose, news TIPS, story angles, human interest stories, drop us an email on [email protected] or via Telegram
Related Content:  President Kenyatta Cautions Politicians Against Misinterpretation Of The Handshake Says It Has A Deeper Meaning With Him And Raila
Related Topics:Atletico MadridBarcaChampionsLa LigaReal Madrid
Up Next

Child Defilement At The Lakeside Beaches