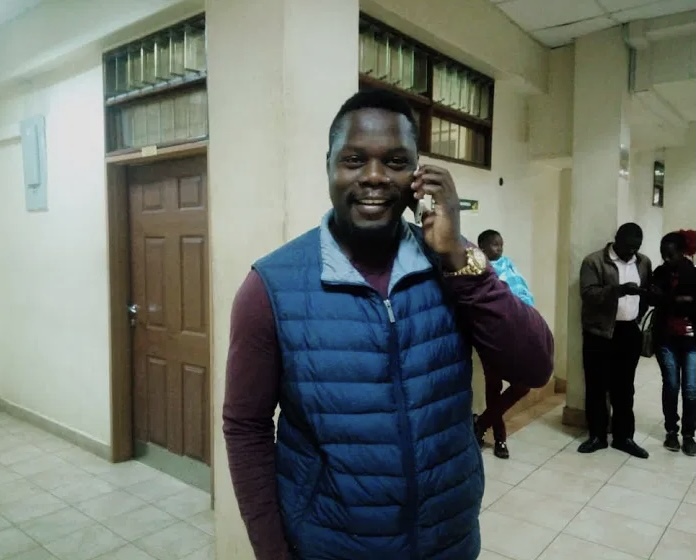 He is accused of planning to kill a key witness in a rape case he is facing alongside Frank Wanyama, who also used to play rugby.

Detectives say they had received a tip off that Olaba had contacted some hit men to eliminate the said witness, in an attempt to evade justice.

Investigating Officer George Otieno told the court that Olaba had already paid a down-payment ahead of the deadly mission. Unknown to him that he would engage undercover detectives at some point.

Detectives at Kilimani Police Division were first notified of the plans on April 17, when they decided to lay a trap- an undercover officer was deployed to him as a hitman.

And on Thursday  night, Olaba was arrested “while in a meeting at Madaraka estate with the sole purpose of achieving his goal to eliminate the key witness.” Detectives who arrested Olaba had posed as hitmen.

Two phones were confiscated from the suspect and are set to be subjected to a forensic analysis. Police are keen on establishing whether he had other accomplices and their identities.

Efforts to secure the witness have already been put in place, police said.

According to sources, Olaba told police that he had been “possessed by satanic spirits”, after he was arrested.

The rugby player is also facing gang rape charges before a Milimani court alongside Wanyama. They are both out on a Sh300,000 cash bail.

Milimani Law Court  magistrate Zainab Abdul released the two on cash bail after they pleaded not guilty to charges of gang rape and committing an indecent act.

This was after the High Court ordered a retrial after quashing their earlier conviction and 15 years imprisonment.

This High Court had established that there was no evidence that one of the key witnesses in the case was sworn in before taking to the stand- which is a requirement before one can testify.

The two rugby players are accused of committing the offence on February 11, 2018 at Seefa Apartment in High-rise estate in Nairobi County.

The two played for Kenya Harlequin and the national rugby 7s team.