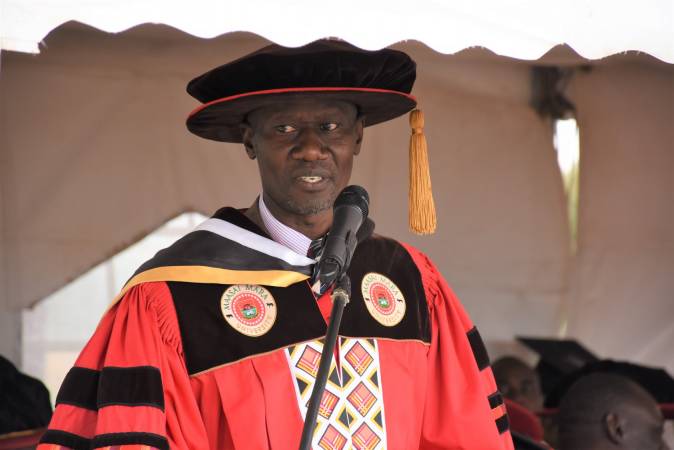 HIGHLIGHTS• Not registered: Prof Kitche Onyango Magak is alleged to have acquired his PhD from Washington International University (WIU) that is neither registered nor accredited by any authorised educational body.• Corruption claims: Prof Magak, who succeeded Prof Mary Walingo, who was sent on leave to allow her continue with corruption allegation charges in court.

The government has demoted Maasai Mara University Vice Chancellor Kitche Onyango Magak following claims that he acquired his PhD degree from an online university neither recognised nor accredited.Prof Magak has consequently been replaced by Prof Joseph Chacha, previously the Deputy Vice Chancellor in charge of Partnership, Research and Innovation at Maseno University.And apart from the demotion, Magak is now under probe by both the Ethics and Anti-Corruption Commission (EACC) and the Directorate of Criminal Investigations (DCI).Magak’s incidence has left the country with egg on its face, with international bodies now questioning the credibility of Kenya’s appointment of individuals to management positions.Onyango took charge of the reins at Maasai Mara University last Wednesday during a low key ceremony presided over by Maasai Mara University Council chairman Kennedy ole Kerei.Magak, who succeeded Prof Mary Walingo, who was sent on compulsory leave in September 2019 to allow her continue with corruption allegation charges in court, is alleged to have acquired his PhD from Washington International University (WIU) that is neither registered nor accredited by any authorised educational body.A letter by John Leaky Grisham, the Chief Department Administrator in the Department of Education in the State of Hawaii, dated September 5,2021, discloses that WIU which began as a diploma college was shut down by the authorities in 2015 for non-compliance with education standards and requirements.The university, according to Grisham, then devised survival mechanisms and started offering online courses but were equally intercepted and the site collapsed for the same reasons.“Note, therefore that, there is no university by the name of Washington International University (WIU) in the state of Hawaii or Pennsylvania,” Grisham says in his letter addressed to Paul Winfrey, the Regional Director of African and Asia Pacific of the International Centre for Academic Integrity (ICAI).ICAI was founded in 1992 by Prof Don McCabe of Rutgers University to combat cheating, plagiarism and academic dishonesty in institutions of higher education.No campusMagak’s troubles started sometime in September when ICAI wrote to Education Cabinet Secretary George Magoha, detailing complaints from some of its members in regard to the acting VC’s qualification.“The centre launched investigations upon receipt of the complaint from its members in the country that Magak does not hold valid PhD documents from a recognised and accredited university in the United States and across the globe,” Win frey said in his letter of September 22, 2021.In a detailed report to Prof Magoha, Winfrey says WIU neither had a physical address nor an administrative office in Pennsylvania.“The university has not sought educational accreditation and does not have a campus. As recently as October 2012, the Oregon Office of Degree Authorisation stated on its website that WIU is located in the British Virgin Islands and that its degrees are not recognised,” Winfrey informed Magoha.Winfrey added that WIU does not exist and that “document awarded to any candidate bearing its name is, therefore, invalid.’’ “As a centre that is mandated to combat cheating, plagiarism, academic dishonesty and champion for integrity, we, therefore, urge you to take necessary action,’’ Winfrey said in his letter.Tumultuous reignBesides, the Maasai Mara University Council, Winfrey’s letter was also copied to EACC, Transparency International Kenya and DCI boss George Kinoti. Following the recommendation by ICAI, Maasai Mara University moved fast and took action against Magak.In a letter dated January 19, 2022, Kerei asked Magak to immediately hand over to Onyango and report to one of the departments of the university.“The university council resolved that you relinquish the position of acting Vice Chancellor and hand over with immediate effect,’’ the letter read. “Report to the chairperson, department of Language, Linguistics and Culture in the school of Humanities, Social Sciences and Creative Industries for assignment of duties.”Magak has had a tumultuous reign at Maasai Mara since his appointment, that ran into problems immediately he took office. The university was forced to put up a spirited defence after Parliament opened investigations into the criterion used to select its bosses following credibility questions.According to the university, after the arraignment of Prof Walingo, its two DVCs also landed in trouble, being charged with corruption allegations, thus leaving Magak as the only most suitable individual.

Related Content:  How Trump’s Funding Cut To WHO Will Affect Kenya’s Wars Beside Covid-19
Kenya Insights allows guest blogging, if you want to be published on Kenya’s most authoritative and accurate blog, have an expose, news TIPS, story angles, human interest stories, drop us an email on [email protected] or via Telegram
Related Topics:
Up Next