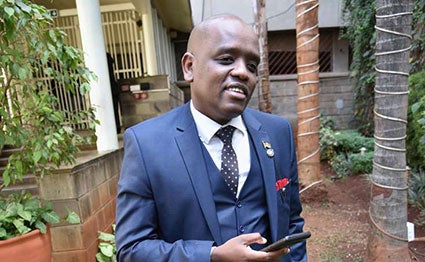 Ruto’s keyboard warrior Dennis Itumbi has been shoved into an embarrassing moment again after he was kicked out of the main dais at the Bomas of Kenya during the launch of the BBI Report.

In a video posted by Daily Nation, Ruto’s man is seen shaking hands with and speaking to another man out of the view of cameras behind the seats occupied by President Uhuru Kenyatta, DP William Ruto, Raila Odinga, BBI task force Chairman Yusuf Haji, and Tanzania’s Foreign Affairs Minister Palamagamba Kabudi.

Security details of the President are captured whisking Itumbi away from the podium to behind the curtains where he belongs. Kenyans on twitter are having a moment just after Itumbi’s boss was laughed at again by the President.

In his defense, Itumbi posted this

No embarassment @dailynation, just another great day in office….of course you See I still remained on the podium. Just one of those moments when everyone is just doing their job…hahaa enjoyed. Tuko sawa https://t.co/k8fYGaws5c

Here are randomly sampled tweets of the awful moment that clearly highlighted how irrelevant Ruto’s tanga tanga team has become.

Dennis Itumbi is a masquerader who passes himself as a director in the presidency, never mind he was recently charged in court but no one told him to “resign”. Because, really, resign from what? @StateHouseKenya https://t.co/bPGv0V97U2

Embarrassing moment for Dennis Itumbi after he was chased away from podium during the BBI launch.<<<< #Tsunami that you asked for. Fake Statehouse purported employees are treated as security threat, jamaa amebebwa juu juu ??? #BBIPeoplesReport
pic.twitter.com/gFdwb1qtBk

Itumbi being manhandled like a village cassava thief is the most hilarious thing I've watched today. Rodent.

Security: Itumbi get off the podium

Itumbi: I work in Harambee House annex and I have a HSC medal

Journalist : Mr President, what do you think about State House official who was man handled at Bomas?

That evil spirit Dennis Itumbi won't tell us that he was chased away from the Podium during the BBI launch.

The once powerful Dennis Itumbi hounded from the podium like a canis lupus. pic.twitter.com/2M5ktbAWKo

Dennis Itumbi was reminded that he is a nobody in this government. Being handled like a village thief. He should've remained in the house and maybe write more love poems to Maribe while Eric Omondi mints the honey. #BBIReport #itumbi

Itumbi being hunted out of stage at the Bomas BBI public launch is hilarious! The "star" of 2013 has become another unwanted eyesore! Just like bad weather!