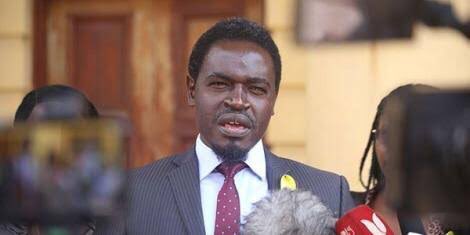 A showdown looms at the Law Society of Kenya (LSK) following the suspension of the President Nelson Havi over alleged irresponsible leadership.

The LSK boss facing various charges including claims of gross misconduct and abuse of office said he will not step down stating that the Council members have no power to fire him and that their efforts are aimed at concealing theft of the society’s money.

The 8 suspended Council Members do not have power to suspend President Nelson Havi. That is a preserve of Members in a General Meeting. The ‘suspension’ is a nullity ab initio intended to conceal theft of Society’s money. I continue to serve till end of term on 24.3.2022. ^POLSK

“That the Council of the Law Society of Kenya in its Ordinary Council meeting held on 8th February 2021 …. hereby recommends the suspension and/or removal of Nelson Andayi Havi from the office of the president of the Law Society of Kenya pending the Ordinary General Meeting to be held in March, 2021 where his defence will be heard in person or through an advocate of his choice and thereafter a decision made by the general meeting through a vote of all members attending the meeting both physically and virtually” said the council.

The members accused Havi of failing the leadership and integrity test, bringing dishonour and disrepute to the society and the dignity of office of its president causing it to lose face nationally and internationally.

“We are not sure the president meets the threshold of mental ability to lead society. His character, integrity and mental capacity continue to worry us. The conduct of the President during his tenure has fallen so short of this requirement. This can only be attributed to his weakness of mind, will and character” the council added.

“In the interim, having lost confidence in him: no scintilla of confidence remaining, we got to act to conserve the best interest of the members, the rule of law and public interest. The remaining reputation of society. Suspending him is a mammoth task but the interests of the members of the Society outweigh his individual interests” they remarked.