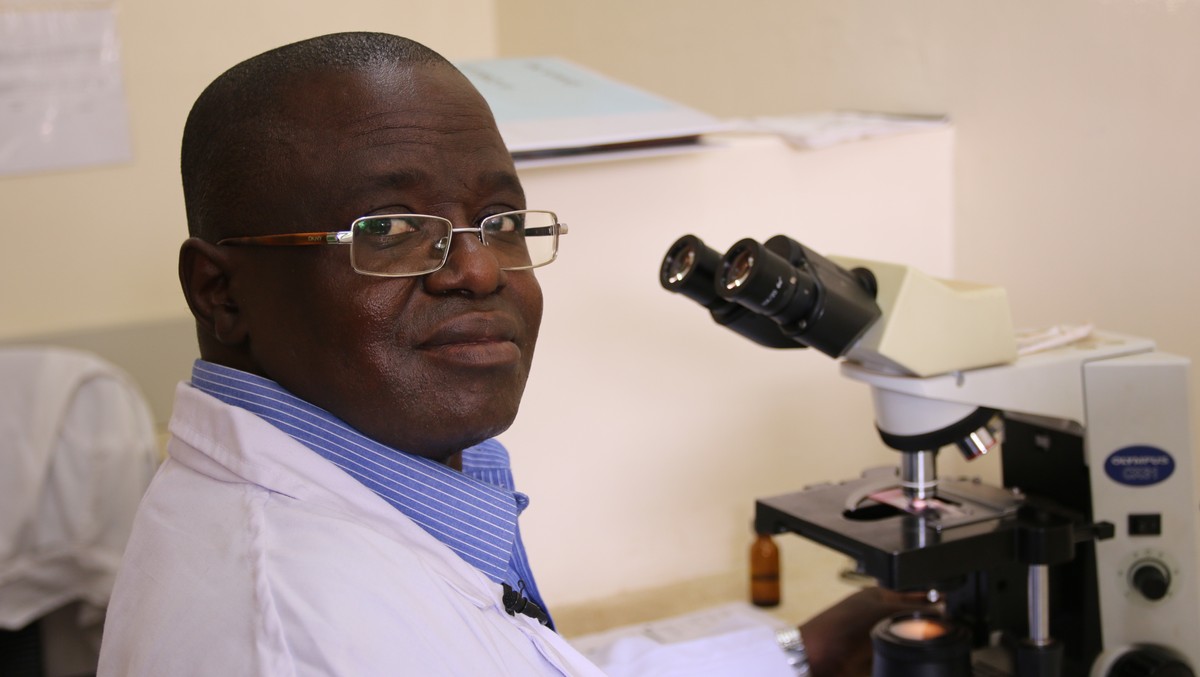 Dr. Walter Otieno is a medical doctor, a Senior lecturer and Head of Paediatrics and Child Health Department at Maseno University School of Medicine, a Senior Research Officer at the Kenya Medical Research Institute (KEMRI) / US Army Medical Research Unit, as well as a Honorary Consultant Pediatrician at the Jaramogi Oginga Odinga Teaching and Referral, the Aga Khan and the Avenue hospitals in Kisumu, Kenya.

A top Kenyan scientist who participated in a ground-breaking medical research is confident of a malaria-free future after the World Health Organization (WHO) approved the first vaccine for children.

The approval is based on results from an ongoing pilot programme in Kenya, Ghana and Malawi. Key findings of the pilots informed the recommendation based on data and insights generated from two years of vaccination in child health clinics in the three pilot countries.

Dr Walter Otieno participated in the vaccine pilot study as the principal investigator in Kisumu and hopes nursing mothers will use the vaccine.

Malaria kills one child every two minutes and more than 260,000 African children under the age of five every year.

An excellent pediatrician, Dr Otieno’s love for children is his greatest motivation whenever it comes to work. His joy is seeing healthy children and happy nursing mothers.

In 2010, he was among medical experts who took part in a four-month pre-vaccine trial on malaria. In 2016, he was invited to work as the principal investigator of the vaccine pilot study in Kombewa.

At the time, he headed the department of pediatrics at the School of Medicine, Maseno University. “I was lucky to be selected as I had the right qualifications and was at the right place at the right time,” he says.

He worked alongside 280 medical experts, including counsellors, nutritionists, laboratory technicians, clinicians and nurses. “We also had pharmacists, doctors and research coordinators,” he offers.

The study took five years and saw an enrollment of 1,631 children in Kombewa aged between six weeks and 17 months. They came from Muhoroni, Seme, Kisumu West, Kisumu East and Kisumu Central sub-counties. Nyando and Nyakach acted as control areas.

The centres were chosen because they had high transmission rates. “We followed them up the entire period from the trials. On average, we were working for 10 to 12 hours a day,” says Dr Otieno.

“Our main aim was finding out if the vaccine was safe, effective and would work with children. By knowing how it works, we wanted to establish if it would reduce the cases of transmissions of severe malaria and our focus was anemia,” he offers.

In Kombewa, 62 per cent of the admissions are due to malaria and reducing the numbers even by half would mean a big difference.

During the study, however, only 10 out of 1600 children died of natural deaths. The malaria vaccine only gives about 50 per cent protection against severe effects of the disease.

The other protective measures include use of bed nets, proper sanitation, and visiting hospitals in case of signs and symptoms. “What we need to do is embrace this new method; it is a trial that was done here and we have confirmed that it works,” he offers.

“We should work on getting as many children as possible vaccinated. Just like any other vaccine, the more people are vaccinated, the greater the protection. The side effects of the vaccine are almost similar to the other immunisations.”

Dr Otieno hopes the vaccine will be embraced around the lake region, a malaria endemic zone. “There is hardly no one who has not suffered the severe manifestation of the disease,” he says.

The vaccine will go a long way in saving costs both at family, county and country level due to hospitalisations.

Data from the pilot programme showed that more than two-thirds of children in the three countries who are not sleeping under a mosquito net are benefitting from the jab.

“This is a historic moment. The long-awaited malaria vaccine for children is a breakthrough for science, child health and malaria control,” says WHO Director-General Dr Tedros Adhanom Ghebreyesus. “Using this vaccine on top of existing tools to prevent malaria could save tens of thousands of young lives each year.”

In recent years, WHO and its partners have been reporting a stagnation in progress against the deadly disease.

“For centuries, malaria has stalked sub-Saharan Africa, causing immense personal suffering. We have long hoped for an effective malaria vaccine and now for the first time ever, we have such a vaccine recommended for widespread use,” offers Dr Matshidiso Moeti, WHO Regional Director for Africa.

“There’s a glimmer of hope for the continent, which shoulders the heaviest burden of the disease and we expect many more African children to be protected from malaria and grow into healthy adults.”

The next step for the vaccine will include funding decisions from the global health community for broader rollout, and country decision-making on whether to adopt the vaccine as part of national malaria control strategies.

Dr Otieno, who hails from Yimbo in Siaya County, was born in 1966 and attended Nyangera Primary and St Mary’s Yala Secondary. He later joined Njiri High and the University of Nairobi to study medicine.

In 1998, he got his first job as a research officer with the US Army Medical Research Unit in Kombewa. He was a post-graduate student in pediatrics and child health at the University of Nairobi.

He later pursued a PhD in molecular medicine with a research interest in sickle cell disease between 2004 and 2009.

How The Media And Betting Firms Are Used In Money Laundering