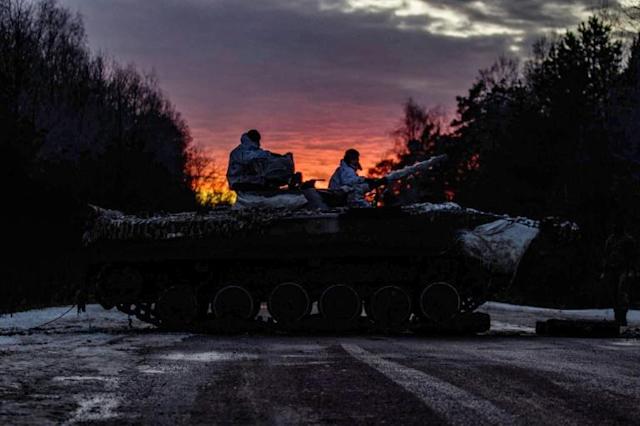 (AFP)-US President Joe Biden and France’s Emmanuel Macron prepared to sound out Russia’s Vladimir Putin on Saturday and Ukraine urged its citizens not to panic after Washington warned that an all-out invasion could begin “any day”.

Weeks of tensions that have seen Russia surround its western neighbour with more than 100,000 troops revved up another notch when the Kremlin launched its biggest naval drills in years across the Black Sea.

The exercises off the coast of Ukraine’s Odessa added urgency to a hastily arranged call Saturday between Biden and Putin aimed at defusing one of the gravest crises in East-West relations since the Cold War.

The Russian leader is also due to speak later Saturday with Macron. The talks come after a week of frantic shuttle diplomacy by the French leader and European officials did little to ease fears of war breaking out in eastern Europe.

Russia on Saturday added to the ominous tone by pulling some of its diplomatic staff out of Ukraine.

The foreign ministry in Moscow said its decision was prompted by fears of “possible provocations from the Kyiv regime”.

But Washington and a host of European countries cited the growing threat of a Russian invasion as they called on their citizens to leave Ukraine as soon possible.

The prospect of frightened Westerners fleeing their country prompted Ukraine’s foreign ministry to issue an appeal to its citizens to keep calm.

Related Content:  Catholic Church Reject Same-Sex Unions As The God ‘Does Not And Cannot Bless Sin’

“At the moment, it is critically important to remain calm, to consolidate inside the country, to avoid destabilising actions and those that sow panic,” the ministry said.

“Ukrainian diplomats are in constant contact with all its key partners, swiftly receiving the information needed to prepare a well-timed response.”

Washington on Friday issued its most dire warning yet that Russia had assembled enough forces to launch a serious assault at any moment.

“Our view that military action could occur any day now, and could occur before the end of the Olympics, is only growing in terms of its robustness,” US National Security Advisor Jake Sullivan warned.

US military assessments had earlier said the Kremlin may want to wait for the Beijing Winter Olympic Games to end on February 20 before launching an offensive so as not to offend Russia’s ally China.

Sullivan stopped short of saying that the United States has concluded that Putin has made the decision to attack.

But some US media cited intelligence sources and officials as saying that Washington believes that a war could begin at some point after Putin concludes talks with German Chancellor Olaf Scholz in Moscow on Tuesday.

The German leader is due to travel to Kyiv on Monday and then visit Putin as part of Europe’s efforts to keep the lines of communication open with Moscow.

Russia is demanding binding security guarantees from the West that includes a pledge to roll NATO forces out of eastern Europe and to never expand into Ukraine.

Washington has flatly rejected the demands while offering to discuss a new European disarmament agreement with Moscow.

Russia has called the US proposal woefully insufficient.

The diplomatic push will continue on Saturday with talks between US Secretary of State Antony Blinken and Russian Foreign Minister Sergei Lavrov.

Blinken told a press conference in Fiji that the crisis had entered “a pivotal moment”.

“If Russia is genuinely interested in resolving this crisis of its own making through diplomacy and dialogue, we’re prepared to do that,” Blinken said.

He added that dialogue would only be possible if accompanied by “de-escalation.”

“So far, we’ve only seen escalation from Moscow,” he said.

Blinken said the United States was also still waiting for a response to “some of the ideas” floated by Washington.

Macron’s talks with Putin came after a visit to Moscow last Monday during which he said he had secured a pledge “that there will be no degradation nor escalation” from the Kremlin.

The Pentagon announced it was sending 3,000 more troops to bolster ally Poland.

“The aim is to prevent a war in Europe,” Scholz’s spokesman said after a call between US and European leaders.

Related Content:  At least 60 People Killed Including 12 US Marines In Afghanistan Explosions

Sullivan spoke to von der Leyen’s chief of staff by video call to coordinate “the details of a potential transatlantic response, including both financial sanctions and export controls,” the White House said.

Kenya Insights allows guest blogging, if you want to be published on Kenya’s most authoritative and accurate blog, have an expose, news TIPS, story angles, human interest stories, drop us an email on [email protected] or via Telegram
Related Topics:Emmanuel MacronJoe BidenRussia-Ukraine WarVladimir Putin
Up Next