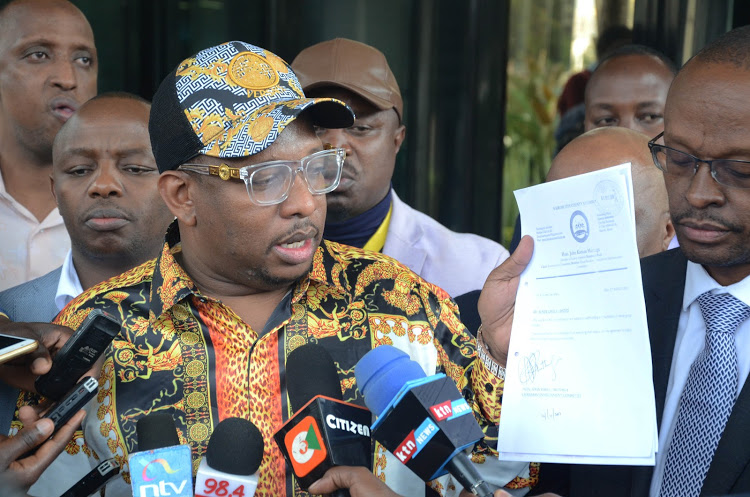 According to EACC, some of the firms that won the Sh357 million tender wired more than Sh20 million to Sonko’s personal bank accounts in what is now believed to be kickbacks.

EACC has also revealed that the money transactions were not paid directly but through proxies and sister companies in what sleuths believe was a calculated move meant to avoid raising suspicions.

On Tuesday Sonko was taken through a marathon eight-hour grilling at Integrity Centre, where he recorded 13 different statements. He denied receiving any money and all other allegations, insisting that he was not involved in the procurement process.

In his defense, Sonko blamed people he did not name in his office for making the payments behind his back.

“I blacklisted the companies and blocked their payments after the Environment committee raised issues,” he added.

EACC is probing claims of corruption in the award of the tenders for 2017-18 and 2018-19. At the centre of the alleged bribery claim is one Anthony Otieno Ombok — a director of Yiro Enterprises, one of the firms that received the controversial tender. Ombok alias Jamal is also said to be a director of another firm known as ROG Security Ltd.

According to EACC investigations, after receipt of payment from the Nairobi County Government, some of the firms would wire part of the cash to bank accounts associated with Ombok. He would then send the money to Sonko’s bank accounts. Detectives have established the complex money trail, almost similar to that which was allegedly used by Kiambu Governor Ferdinand Waititu to get cash from the county.

“It’s alleged that the companies that won the garbage collection tenders after receipt of payments from Nairobi City County Government through proxies and sister companies made payments of over Sh20 million to Governor Mike Mbuvi Sonko—through his bank accounts,” stated an EACC document seen by the media.

According to EACC, the probe is also focusing on claims that the tenders were dogged by procurement irregularities and misappropriation of public funds. There are also claims of inflated payments, fraud, and conflict of interest.

Sonko has presented himself as an innocent governor who is only being sought for the sins committed by his employees.

“I’m not under investigation, but I was summoned as the Chief Executive of the county to come and shed light. As county boss, I don’t sit in the procurement committee and I’m not the accounting officer but I have the general responsibility for my officers.” Sonko said on Tuesday after the questioning at Integrity Centre.

Sonko claimed the questions centered on concerns raised previously by the county Environment committee questioning how some of the companies were awarded tenders without proper qualifications and due process.

“I’m not under investigation, but I was summoned as the Chief Executive of the county to come and shed light ” Sonko said

If the investigation goes deeper and Sonko gets charged, the prosecution is likely to plunge Nairobi into a constitutional crisis because to flamboyant governor might be forced out of the Office. He has refused to name a deputy governor almost 21 months after his deputy Polycarp Igathe resigned over their troubled working relationship.

This means Sonko will have no one to hand over to, a precedent that has already been set by the High Court following a landmark decision by Justice Mumbi Ngugi. Additionally, the Nairobi county assembly has no substantive speaker following the impeachment of Beatrice Elachi.

Waititu and his Samburu counterpart Moses Lenolkulal have been barred from office after Justice Mumbi ruled that county chiefs charged with corruption should stay away from the office.

Their roles should be completely taken over by their deputies for the duration of their trials, the ruling stated. The red flag over the garbage collection tender was first raised by the Nairobi county assembly Public Accounts Committee in July last year.

The watchdog committee revealed that officials at City Hall’s Environment department could not account for more than Sh160 million paid to contracted garbage collectors. This was after it emerged that the county government irregularly paid Sh162 million to 11 companies contracted to collect garbage.

However, officials could not submit payment vouchers made to the companies, the list of the 11 firms and their contractual documents to support the payment.

Kenya Insights allows guest blogging, if you want to be published on Kenya’s most authoritative and accurate blog, have an expose, news TIPS, story angles, human interest stories, drop us an email on [email protected] or via Telegram
Related Topics:EACCMike SonkoNairobi County
Up Next

‪Money Heist: G4S Has A Long History Of Getting Robbed‬